The Z Style Pack is a downloadable content pack in Saints Row: The Third.

Live the high life of Zimos himself by adding a weapon to your arsenal and an outfit to your wardrobe with the Z Style Pack. You won't go unnoticed in the bold and pimpalicious outfit good enough to be called The "Z". Arm yourself with the super flashy Bling Shotgun and your bullets won't be the only thing that makes an impact.

While the main line is generally "Who doesn't wanna be Johnny Gat?", there are more than a few citizens of Steelport that also want to be Zimos. With our new "Z-Style DLC Pack", you can dress up in a specially tailored version of Zimos' suit, and carry around a brand new signature weapon, the Bling Shotgun. Take a look at the video below and see if you've got enough style to rock these new threads.

The Z Style Pack comes with one suit, and the Bling Shotgun. Can be purchased online via PSN, Xbox Live, or Steam for $1.99 or 160 Microsoft Points.[2] 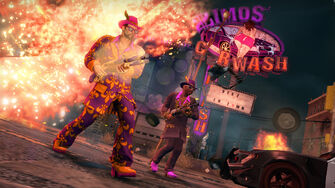 The Protagonist with Zimos, wearing the suit and holding the Shotgun

This article contains no references. See Help:Cite.
Retrieved from "https://saintsrow.fandom.com/wiki/Z_Style_Pack?oldid=407235"
Community content is available under CC-BY-SA unless otherwise noted.