The XS-2 Ultimax is a weapon in Saints Row 2.

This is the second most powerful shotgun in the game, and kills people in 1 shot at short to medium range. Like the AS14 Hammer, it is a rapid fire shotgun, but has slightly less refire delay making it the fastest firing shotgun in the game. It has the greatest range of any shotgun, and the second greatest damage per shot at short range, just behind the Pimp Cane. However, it has the highest spread of all shotguns (tied with the AS14 Hammer), limiting its effective range. While the Pimp Cane deals more damage per shot, the XS-2 Ultimax dishes out the highest damage per second out of all shotguns.

The XS-2 is unlocked in the Weapons Cache after completing level 3 of the Drug Trafficking activity at Wardill Airport. It is never available from Friendly Fire, but ammunition is available there, since it uses normal shotgun ammo. 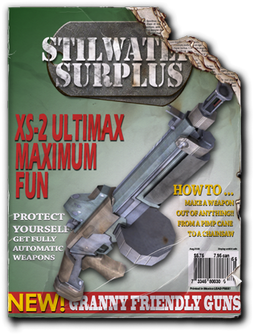 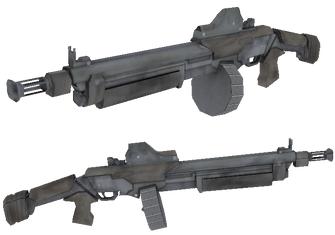 The XS-2 Ultimax in a model viewer

This article contains no references. See Help:Cite.
Retrieved from "https://saintsrow.fandom.com/wiki/XS-2_Ultimax?oldid=416828"
Community content is available under CC-BY-SA unless otherwise noted.