"When Good Heists Go Bad" is the first mission in Saints Row: The Third.

Josh Birk: "You're robbing a bank dressed like yourselves?"
Johnny Gat: "Hell yeah. Who doesn't wanna be Johnny Gat?"

A brief expository opening crawl briefly explains that in the several years after the events of Saints Row 2, the 3rd Street Saints have evolved into a "media empire". Josh Birk, a method actor who is preparing to film a movie based on the 3rd Street Saints, has accompanied Johnny Gat, Shaundi, and Playa as they prepare to heist the Stilwater 1st National Bank to better understand his role. After watching a Saints Flow commercial starring Pierce, he and the others don their Johnny Gat mascot suits in disguise and exit the elevator to begin the heist.

Birk is initially disappointed with the heist; he derides the gang as "a bunch of pussies" as they stand around signing autographs for the visitors. However, it is quickly revealed that the bank is more than ready to withstand the 3rd Street Saints, and the group struggle as they fight through the bank's red-clad security guards. As they attempt to airlift the bank's vault using a Stork helicopter, Birk accidentally trips an alarm (believing it to be the door-release button for the vault) and the SWAT arrive. Birk flees as the Saints are overwhelmed, and Playa is ultimately caught.

This mission automatically starts upon starting a new game. It is not possible to exit this mission, only to restart it.[2]

After the opening cutscenes finish, the mission begins with under fire. Playa is armed with a 45 Shepherd (level 2), a TEK Z-10, a AS3 Ultimax, and a K-8 Krukov (level 4), all with infinite ammo.

There are 3 armed tellers in the bank lobby, joined by 2 guards. Behind the closed doors, Gat kills the first guard, leaving 3 marked guards on the ground floor and 2 upstairs.

6 marked guards come down the stairs.

Head up the next stairs.

Go to the vault

At the top of the stairs, Shaundi is fighting with a guard, enter the vault room trigger another cutscene.

More guards arrive in the lobby below, but are not required kills.

Either sign an autograph for a fan, an early introduction to the similar Photo Op Collectibles later in the game, or just ignore/kill them and set the explosives above the vault.

After Birk sets off the alarm and flees, and SWAT arrives. A Flashbang goes off, which cannot be avoided no matter where Playa is standing, or where the camera is pointed.

After the second group is killed, 2 SWAT enter along the balcony and are repeatedly replaced up to 5 times as they are killed, independent of the window waves. These are not required to be killed to trigger the next objective, but Gat and Shaundi will target them anyway.

A helicopter flies in and fires bullets and rockets into the bank, and must be damaged to a certain level before the next objective is triggered.

The Tornado cannot be destroyed, even using Cheats to spawn an Annihilator RPG.

Playa is not required to fire, as Shaundi and Johnny Gat are capable of bringing the helicopter health to the required level.

The finale of the mission does not contain an objective, and features Playa atop the vault as the Stork helicopter attempts to airlift it out of the building.

During this scripted sequence, Playa moves from one end of the vault to another, holding on in various places as the Stork manoeuvres between the bank and various nearby buildings. The low Health beep is triggered after being shot, but despite this section having a Checkpoint, it is not possible to be Smoked.

There are waves of SWAT, both coming up the stairs and being dropped off by Eagle helicopters, as well as Oppressors containing Sniper Specialists. The Tornado returns, and this time must be shot by Playa with approximately 16 bullets in order to reduce the health to 1/4 and trigger the final cutscene.

The next mission, "I'm Free - Free Falling", continues immediately after the Player Customization following this mission.

Jane Valderamma: "The celebrity of the 3rd Street Saints was put to a violent and destructive test in Stilwater. Patrons of a local bank were subjected to a mock hold-up by this internationally popular gang. However, excitement was replaced with panic when shots rang out and blood began to decorate the lobby. During the ensuing firefight, the bank's vault was ripped from the building, showering rubble down onto the bystanders below. The extent of the damage landed the Saints, like so many celebrities before them, in jail - at least for a few hours. This is Jane Valderamma with your Celebrity Crime News."

A Saints Flow Commercial plays
Pierce: "Super excellent!"
The camera pulls back from a cellphone
Josh: "Japanese commercials. Easiest money you'll ever make."
Gat: "Grand larceny's right up there. You ready for this?"
Josh: "No worries--I do my own stunts."
Shaundi: "You're just a ride-a-long, man--"
Shaundi: "So don't get all Hong Kong-style in there."
Josh: "I am a Method actor. If I'm gonna play a Saint with any degree of emotional truth, I gotta make it real."
Playa: "Trust me, Birk. It'll be real."
Josh: "You're robbing a bank dressed like yourselves?"
Gat: "Hell yeah. Who doesn't wanna be Johnny Gat?"
Josh: "Ultra-post-modernism. I love it."
Shaundi: "I'm cool with the Saints movie, but do we really gotta drag this asshole actor around?"
Playa: "Cut Josh some slack, he's just researching his part."
Shaundi: "I hope he signed a waiver."
Playa: "Alright people--"
Josh: "NOBODY MOVES, NOBODY DIES!!"
Gat: "Birk!"
Josh: "Sorry, jumped his line. Can we go again?"
Playa: "You all know the drill."
Man: "Can I get a picture with the boss?"
Shaundi: "Say "sleaze"!"
Josh: "Get in line, bitch!"
Shaundi: "Hey--don't be a dick."
Josh: "You call yourselves gang bangers? You're a bunch of pussies! We should be all up in their shit, like--"
Josh: "FUCK!!"
Playa: "Well, that's different."
Gat: "You got a plan, or we just shooting all these motherfuckers?"
Playa: "That is my plan."
Gat: "Works for me."

That's right, you fuckers! We're comin' for you!

Shaundi: "Let's get the chopper and lift this baby outta here."
Josh: "Hey guys, you can call off the helicopter, I found the way to open the vault!"
Gat: "DON'T TOUCH IT!"
Shaundi: "Josh...are you trying to get us all jail time?"
Josh: "What? I don't wanna be some dude's bitch!"
Shaundi: "Do I have to go after him?"
Gat: "Forget about it, he'll be fine."

The chopper should be here soon, we just gotta hold out a little longer.

They've busted out the riot shields.

Shoot the helicopter! Use whatever you've got!

SWAT: "Troy can't bail you out of this one!"
SWAT: "This publicity stunt is over. We have to take you in."

SWAT: "Make this easy on the squad for once."
SWAT: "Step away from the vault!"

SWAT: "Please autograph and then put down your gun!"
SWAT: "Turn yourself in, my son wants to meet Shaundi!"

You've gone too far this time!

Where do you expect to hide that vault?

Watch it! Opposite side! 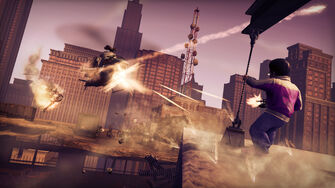 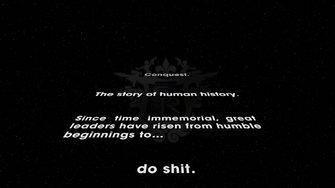 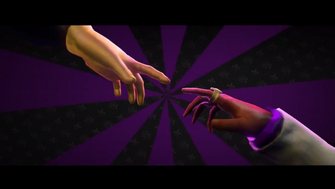 In a scene that parodies The Creation of Adam, Pierce reaches towards a can of Saints Flow in a Japanese commercial 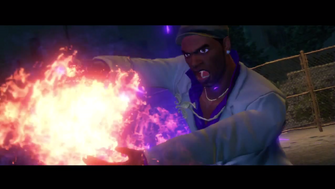 In the same commercial, Pierce uses a Hadoken 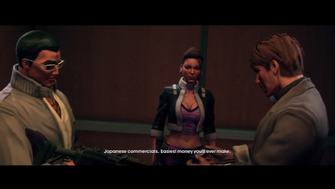 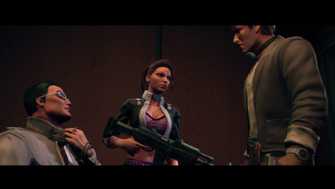 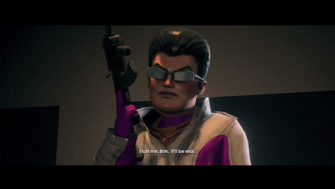 Playa meets the three outside the elevator 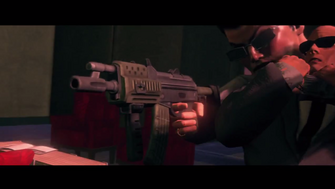 After meeting resistance, the group fight back. Johnny Gat uses a security guard as a Human Shield 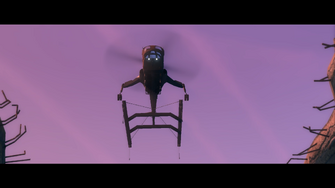 A Stork arrives to airlift the vault away 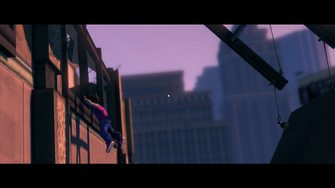 As the Stork crashes, Playa dives towards the windows and back inside the bank 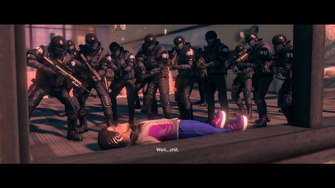 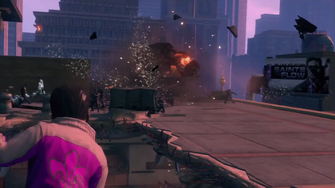 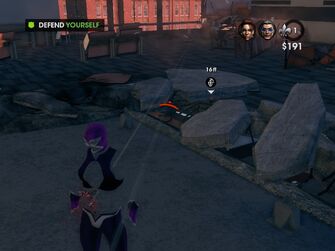 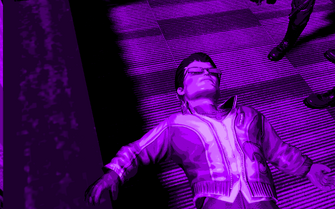 This article contains no references. See Help:Cite.
Retrieved from "https://saintsrow.fandom.com/wiki/When_Good_Heists_Go_Bad?oldid=423874"
Community content is available under CC-BY-SA unless otherwise noted.