Wheel Woman is a character in Saints Row.

Wheel Woman is unlocked as a homie after completing the first mission of the game, "Canonized".

She does not appear in any missions for Saints Row.

Wheel Woman has the unique ability to drive vehicles for the player, giving the player the oppurtunity to perform drive-bys with any weapon and instruct her on where to drive. She is, however, a slow driver.

After Wheel Woman is recruited as a follower, she drives any car Playa enters. As she approaches any intersection, a directional prompt appears on-screen. While driving in a two-lane road, it is possible to change lanes without an on-screen prompt. While in the lane furthest from a turn, it is not possible to turn in that direction.

If Wheel Woman is dismissed while driving, it is still possible to control the vehicle. It is not possible for Wheel Woman to enter a vehicle as a passenger, and she is automatically dismissed when using the Taxi Service.

If Wheel Woman hits a Five-O, or otherwise attracts Police attention, Notoriety is not affected, and the Police do not stop pursuing her. 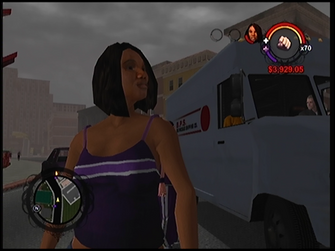 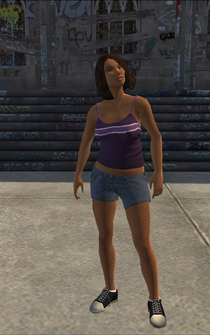 This article contains no references. See Help:Cite.
Retrieved from "https://saintsrow.fandom.com/wiki/Wheel_Woman?oldid=424439"
Community content is available under CC-BY-SA unless otherwise noted.