Welcome to Hell is the first Quest in Saints Row: Gat out of Hell.

I'm surprised you haven't gone to the Ultor building to rough up Dane yet...

This quest consists of two missions.

After Jane Austen's opening monologue, the Saints celebrate Kinzie's birthday. Pierce does Jane's nails, Zinjai, Asha and CID play pin the tail on the donkey, while The Protagonist, Gat, Matt, Shaundi and Kinzie play a board game. At the board game, Matt does a question regarding The Protagonist if they ever choose a partner to reign alongside them. The cursor moves to 'Yes' and Matt teasingly says someone will be getting married, which The Protagonist soon tells him to shut up. After Shaundi asks of the name of the partner, the cursor moves along the letters, even though they are not moving it to spell out 'Jezebel'. While wondering who Jezebel is, a portal behind The Protagonist activates and they are sucked into it. As Gat asks Matt where he got the board, the cursor keeps moving from 'H' to 'A', meaning it is laughing at them until Gat pulls out his gun and shoots it. After threatening it, the board decided to cooperate and reveals The Protagonist is in Hell.

The second mission is a flight tutorial which opens after Gat has been given Lucifer's Halo, with no explanation for his ripped clothes.

The mission ends after completing the tutorial.

Gat and Kinzie land in the Angels End neighborhood of the Barrens District of New Hades.

This objective is completed upon entering any vehicle. It is not possible to skip this objective, entering the Ultor building before entering a vehicle does nothing.

This objective is completed upon passing through the lobby of the Ultor building.

Completing this objective completes the mission, which auto-starts the next.

After Gat and Kinzie finish speaking, a prompt is displayed to "Access Map", accessing the Map is not required in order to complete this objective, but triggers 2 optional objectives.

When opening the Hub, the optional objective "Go to Map" starts, but it is not required to complete this objective and it goes away after exiting the Hub.

The "Go to Map" objective is shown every time the Hub is accessed, until the "Set GPS to Ultor" is completed.

When opening the Map, the optional objective "Set GPS to Ultor" starts, but it is not required to complete this objective and it goes away after exiting the Map.

This objective is shown every time the Map is accessed, until the objective has been completed.

As the objective does not begin until Gat and Kinzie finish speaking, it is possible to set the GPS to Ultor before the prompt, but the prompt is still shown.

This objective is completed by exiting the Hub Menu, and is not possible to skip this objective.

After the cutscene, the second mission begins with Gat on a small floating island to the east of The Edge. At the beginning of this mission, only the Stats menu is available.

There are 4 Soul Clusters to collect on a small island.

Although it is possible to reach the next island without passing through the marker, the marker must be entered to complete the objective.

Johnny Gat: "OOF"
Kinzie: "Aaaaaaaaaaaaaaagggghhhhhhhh OOF"
Johnny Gat: "Dane Vogel. Ultor's behind this... I know it..."
Kinzie: "Ultor and the Saints haven't been enemies in years, you really think he's responsible?"
Johnny Gat: "You don't know him like I do... the boss put him through a window for a reason..."
Kinzie: "The reason was that the boss was kind of fucking crazy back then."
Johnny Gat: "That's a fair point."
Two unused lines follow directly after this.
Kinzie: "You're still going to shake down Dane aren't you."
Johnny Gat: "Oh yeah."


— Upon arriving in hell

Johnny Gat: "Alright, how are we gonna find the Ultor building..."
Kinzie: "Biggest building down here, giant Ultor sign on it...I don't think this is a problem."
Johnny Gat: "I'll buy that."


— After entering a vehicle

Kinzie: "I think we may have got the attention of the demons. How do you want to handle this?"
Johnny Gat: "We handle it by killing Demons."

Kinzie: "Look at us: Kinzie Kensington and Johnny Gat driving together on a birthday adventure..."
Johnny Gat: "Are you always this excited?"
Kinzie: "Generally I'm a misanthrope."
Johnny Gat: "I get it."

Johnny Gat: "So this is hell. Not as bad as I thought."
Kinzie Kensington: "It kind of reminds me of Steelport."


— When nearing the Ultor building from any direction

Dane Vogel: "Welcome to Hell."
Kinzie Kensington: "Shouldn't you have a receptionist?"
Dane Vogel: "Such is the plight of eternal damnation - but I have a feeling you didn't come here to catch up. Let's talk in my office..."


— Inside the Ultor building

Johnny Gat: "Alright, you got me out in the sticks, now what?"
Dane: "Would it kill you to show a little excitement? You're about to experience angelic flight for Christ's sake..."
Johnny Gat: "Dane..."
Dane: "Someone needs a nap... Just collect some Soul Clusters and power up the halo, you'll be flying around in no time."

Great! Now you should have just enough clusters to power up your halo.

Dane: "Alright! Let's start slow, try to jump over to that next island!"
Dane: "Also, the longer you charge your wings before jumping, the further you will go."

Dane Vogel: "Hey! You didn't fuck it up, good job!"
Dane Vogel: "Now get up that cliff. Don't worry if something looks too high, just keep on jumping off the wall."
Dane Vogel: "Remember to charge your jumps if you want to get up the cliff faster."


— After completing the "Charge jump to next island" objective

Now it's time to fly. You heard of crawling before walking? Well in this case you need to jump before you can fly. Launch yourself in the air with a jump and then hold your wings out to glide to that next island! I put out some orbs to show you the path.

— Dane Vogel introducing the "Fly to next island" objective

Dane: "Try again. Here's a tip: You don't need to get a running start to fly. Just jump then hold your wings out to glide. Let the wings do the work!"
Dane: "One more time. Jump, then hold out your wings. Once you're in the air just keep those wings out and guide yourself to the next island."


— After failing the "Fly to next island" objective

Dane Vogel: "You'll have to dive to reach the next island. Do that by pointing your head down. Don't worry, the rest of your body will follow."
Dane Vogel: "Take note, that you gain speed while diving. You can use that to fly longer distances."


— Introducing the "Dive to next island" objective

I put a shiny flap orb out in front of you. Collect the orb and you're wings will flap to gain speed.

— Dane Vogel, introducing the "Get Flap Orb and fly to next island" objective

You missed the orb, dude. Lets try this again.

— Dane Vogel, after landing on the platform without collecting the Flap Orb.

Alright now try flapping those wings on your own. Do a flap on your way to the next island.

— Dane Vogel, introducing the second "Fly to next island" objective

Dane: "The exact opposite of diving, is climbing. Climbing will slow you down, and eventually cause you to stall... and trust me stalling sucks!"
Dane: "You can flap while gliding to gain additional speed, the faster you're going the higher you can fly. Now try to reach the island up there.."


— Introducing the "Use Flap to Fly to Island" objective

Dane: "Alright, time to take the training wheels off for the final lesson."
Dane: "FLYING TAKES STAMINA. If you run out in midair, you are going to drop like a rock. A stupid, stupid, stamina-less rock."
Dane: "Last island is right under those lava falls. Notice how your stamina drains the longer you glide."

Dane: "Let's get you back to the Ultor building... I want to run through all the stuff you can do to hurt Satan."
Johnny Gat: "Sure thing. See ya soon."


— After completing the Tutorial

Alright. Let's try those wings out, shall we? Just fly over to that island and collect that glowy thing over there.

Well there you go, young grasshopper. Practice makes perfect, so make sure to get in some airtime when you can.

Johnny Gat: "I think I'm getting the hang of this..."
Kinzie: "Easy as statistical thermodynamics!" Gat not roughing up Dane 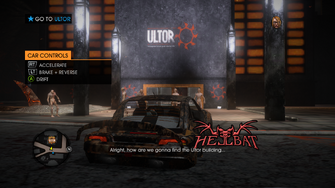 Gat cannot find the Ultor building, despite having already been inside it 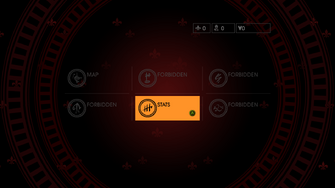 Spread your Wings - all menu items locked except Stats 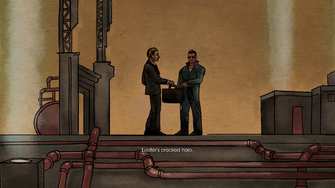 This article contains no references. See Help:Refs.
Retrieved from "https://saintsrow.fandom.com/wiki/Welcome_to_Hell?oldid=319007"
Community content is available under CC-BY-SA unless otherwise noted.