"Waterfront Rooftop" is a Stronghold in Saints Row.

Some of the Vice Kings have been hiding out near the waterfront. Go in there and send those mother fuckers a message.

Julius Little phones Playa and briefs them on some Vice Kings hiding out on a rooftop in the Red Light District. Playa clears them out and destroys several nearby enemy patrols.

Acting on Julius' orders, you crashed a Vice King party that was happening on the rooftop of a Prawn Court apartment building. After taking out the party goers, you elimated incomming [sic] reinforcements by using an RPG you found on the roof. (hideout)

Fight your way to the rooftop.

Go through the building and kill the few Vice Kings that fight back. Once on the rooftop, there are several more enemies. Once they're all dead, there is an RPG Launcher available. Stand in the blue marker to trigger the next objective.

Five vehicles must be destroyed as they pass by. 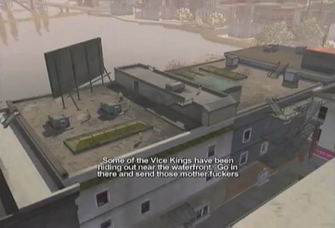 The building where the Stronghold takes place

This article contains no references. See Help:Cite.
Retrieved from "https://saintsrow.fandom.com/wiki/Waterfront_Rooftop?oldid=423025"
Community content is available under CC-BY-SA unless otherwise noted.