"Waste Not Want Not" is the third mission of the The Brotherhood story arc in Saints Row 2.

Playa meets with Carlos, but is dissatisfied with the little information Carlos has on The Brotherhood; Carlos has only heard word about an incoming shipment. Gazing outside, Playa sees the Nuclear Power Plant in the distance and suddenly has an idea.[2]

Playa raids the power plant and gathers some toxic waste. Carlos then appears in a helicopter to pick them up and they both escape. Back in the city, they drive towards a tattoo store Maero uses and swap the tattoo ink with the toxic waste - later that day, inside the Brotherhood hideout, Matt finishes inking a new tattoo on Maero's face and Maero screams in pain as the toxic waste burns him.[3]

Security at the Stilwater nuclear power plant is expected to triple after an unknown assailant assaulted the island early this morning. The assailant purportedly assaulted members of the plant's security forces before escaping by helicopter. Earlier reports that the assailant had managed to obtain a small amount of radioactive waste have yet to be confirmed by plant officials.

There is a 15 minute timer to complete this mission.

After going down the stairs, get in the 3rd Street Saints vehicle in the nearby parking lot, or any other vehicle close by, and drive to Friendly Fire.

Once inside, walk to the marker in front of the clerk to buy the Geiger Counter.

This is a custom trigger which immediately equips the Geiger Counter and does not open the store menu.

Take a vehicle to the power plant

Head to the Python marked by the GPS.

Get to the nuke plant

Once inside, drive to the Nuclear Power Plant.

There is a tunnel which leads under the island, with stairs to the surface. This may be convenient depending on the location of the toxic waste.

Checkpoint
Track down some toxic waste, but don't get spotted

Despite what the game advises, being spotted is not a problem and does not fail the mission.

There are 7 possible locations for the toxic waste, one is chosen randomly, with an on-screen hint to the approximate location.

When the Geiger Counter is equipped, there is a radiation meter in the HUD which shows the proximity of the toxic waste.

There are 4 different hints for the 7 locations:

When resuming from this checkpoint, there is a 11 minute timer to complete the mission.

Checkpoint
Get to the helipad

When the toxic waste has been collected, head to the helipad near the center of the island.

When resuming from this checkpoint, there is a 9 minute timer to complete the mission

Kill the security guards so the helicopter can land

There are 10 marked guards who must be killed to complete the objective. Homies can kill all 10.

After 4 are killed, Carlos and the helicopter do a flyby and leave.

Defend the helipad until the helicopter returns

When the timer runs out, Carlos arrives in a helicopter.

Get in the helicopter

Approach the helicopter and press the action button to enter it.

Once in the helicopter, an AR200 SAW with infinite ammunition is provided to shoot down the pursuing helicopters and boats. When the helicopter reaches the city, it crashes, causing Playa to ragdoll through the air, but with no health loss.

When resuming from this checkpoint, there is a 7 minute timer to complete the mission

Deliver the toxic waste to the tattoo parlor

Finally, get in a vehicle and drive to Rusty's Needle with Carlos before the time limit expires to complete the mission.


— After picking up the toxic waste

We're almost to the nuke plant

— Carlos, once Playa reaches the helipad

It's too hot down there, if you don't clear off that helipad I won't beable to land this thing...

It's still too hot down there

— Carlos, after Playa clears out some guards

Come on, get in

— Carlos, after landing the helicoper


— After entering the helicopter

Pilot: "Maybe I'd handle this thing better if I didn't have a gun to my face..."
Carlos: "Shut up!"
Pilot: "Jesus, how many people are trying to kill you?"
Carlos: "Can ya just fly this thing?"
Pilot: "Ya know if people would stop trying to kill me I'd have a better chance at getting us back"
Carlos: "bitch bitch bitch..."

Matt: "Bro, you are gonna look like a bad mother fucker."
Maero: "That's good, 'cause I was beginning to think I looked like an investment banker."
Jessica: "I'm glad you two are having fun, 'cause god forbid we do something about the Saints..."
Maero: "I'm gonna take care of them babe..."
Jessica: "Sure you are."
Maero: "You think I'm afraid?"
Matt: "No she doesn't Maero, now can you stay cool? I'm almost done..."
Maero: "I think you should stick to tattooin' and drop the guitar."
Matt: "Whatever, The Feed Dogs fuckin' rock."
Maero winces slightly
Jessica: "Baby..."
Maero: "Screams in anguish" 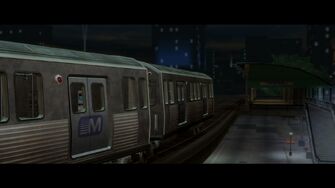 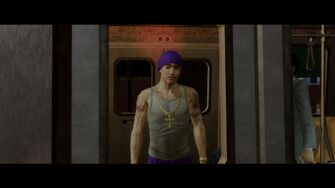 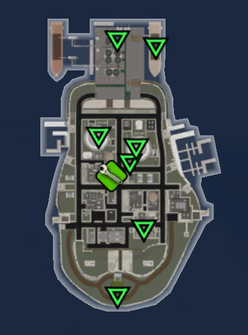 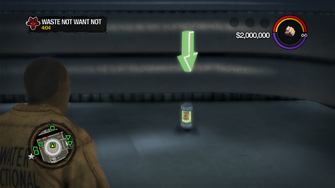 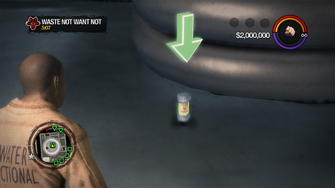 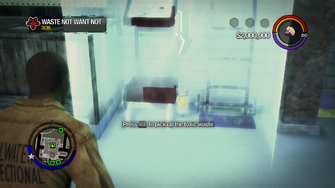 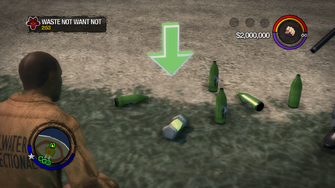 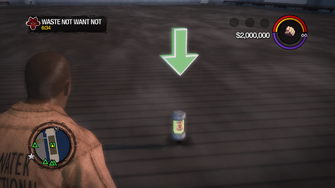 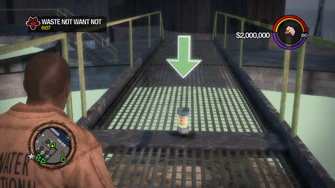 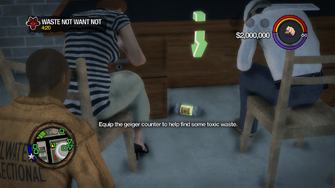 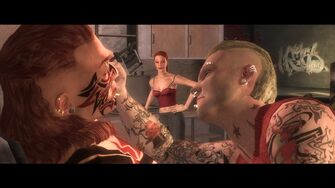 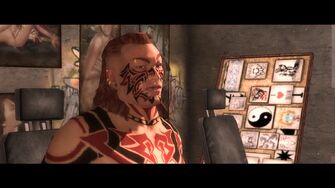 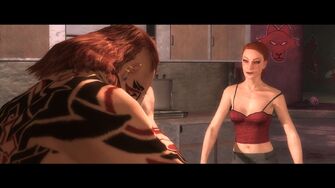 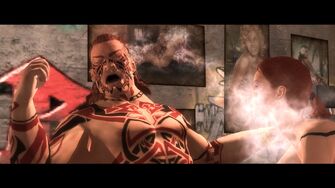 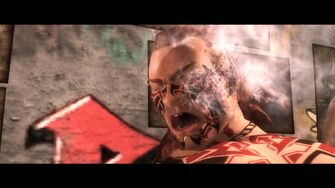 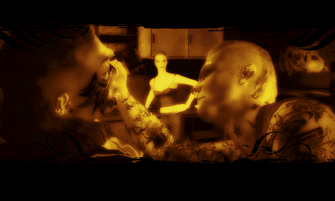 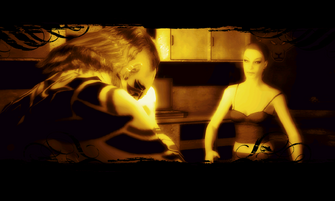 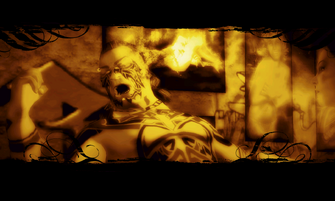 This article contains no references. See Help:Cite.
Retrieved from "https://saintsrow.fandom.com/wiki/Waste_Not_Want_Not?oldid=426064"
Community content is available under CC-BY-SA unless otherwise noted.