Wardens are an alien race in Saints Row IV.

The Wardens make various appearances all throughout the storyline. One notable instance in which they appear is every time Playa's Notoriety is at level six (the highest level in the game). They are also easily one of the tallest enemies in the game as well; being taller than both Playa and even many of the other Zin troops.

Wardens are among the most powerful enemies in the game and going up against one unprepared can be extremely hazardous and can have an unpredictable outcome. Wardens have the ability to quickly overpower and incapacitate both Playa as well as any other nearby simulation programs if they are not careful. Physically, Wardens are immensely strong, and are able to almost effortlessly knock Playa back with one hit and cause them to be launched and land a short distance away like the Brute from Saints Row: The Third, although there are no quick time events to dodge the attack as the melee hit is much faster than a Brute's melee hit.

Also, like many other different enemies in the game, Wardens also have access to Super Powers (courtesy of Zinyak.) The most common powers that Wardens typically wield in battle are:

In addition to their Super Powers, they are also armed with wrist-mounted laser rifles which they can utilize to great effect in attacking Playa from a distance; allowing them to cover a very large area in a very short period of time. The way a Warden's laser rifle functions is rather similar to how the Lasergun Arms that Murderbots wield are used (the only difference being that the Wardens seem to be able to control where their lasers actually fire.)

Even though they were apparently intended to not have this ability at first, after Playa defeats the very first Warden (who in turn grants the player the Blast superpower), Zinyak added the addition of energy shields to their code, which completely covers their bodies and are always active; making them invulnerable to all non Super Power-Based attacks. However the shields do have one weakness that allows Playa to take them down. The shields can be temporarily disabled when hit with any of the four Super Powers that Playa acquires throughout the game. With the shields disabled, Playa is free to attack the Warden with any weapon or attack of their choosing until the shield reactivates.[1]

Once a Warden has received a sufficient amount of damage, they become incapacitated until Playa flies inside them and performs a special kill move quick time event. Should Playa fail to execute the kill move successfully, or delay in performing it for a long enough amount of time, the Warden regains some of its health and resume combat.

Most weapons available in the game are capable of damaging the Warden (since they are not truly indestructible; the shield is capable of being disabled.) Weapons with high rates of fire and shotguns at close range can do lots of damage, as the Wardens surprising amount of speed and agility can make it an extreme challenge to consistently hit them, as they can sprint at a surprisingly fast and can Super Jump onto buildings. Super Powers can also be used to momentarily stun Wardens or increase the damage done by Playa, and Buff can be used to constantly keep the Wardens shield from reactivating (leaving the Warden at Playa's mercy.)

Wardens have 6 methods of attack. The first method is a Blast fired from their mouths. There is a noticeable charge time before the blast is unleashed, allowing Playa time to dodge the Blast. The Blast attack is powerful enough to instantly destroy many vehicles. Their second method of attack is to use Telekinesis to hurl a nearby prop at Playa. There is a delay between when the Warden picks up the prop and when he throws it, and the red trail leading to the prop is clearly visible. One thing to note is that Wardens can also catch objects launched by the player, and then toss them back. Their third method of attack is the Stomp power. They leap into the air before performing this attack, giving Playa time to get off the ground before the shockwave is unleashed. Sometimes, Wardens may perform two stomps in a row. Their fourth method of attack is a simple wrist-mounted laser that they use to attack Playa. The laser deals a small amount of damage and is quite innaccurate, making it the least dangerous attack used by the Wardens. Their fifth method is a swipe that they use at close range. The swipe is extremely powerful and knocks the player back quite a distance, making it a foolish endeavour to challenge the Wardens at close range. They can also charge Playa before slamming the ground in front of them, although this attack can be dodged by moving away when the Warden charges Playa. Their sixth and final method of attack is a move similar to the Death From Above ability used by Playa. They seem to only use it if Playa is in a vehicle, destroying it instantly, or if Playa is a large distance away from the Warden.

Once the Warden has lost all of its health, it becomes stunned and a prompt appears on screen. By pressing the corresponding button/key, this results in Playa flying into the Warden and merging with it. Upon merging, a quick-time event starts a bar that appears on the bottom of the screen that shows how close Playa is to either officially killing the Warden or being forced back out of it. Buttons/keys appear on screen at this stage of the kill move, and they must be pressed rapidly in order to fill the bar that appears until it completely fills purple in order to destroy the Warden.

This must be completed as fast as possible, because the bar decreases progressively faster the longer the move is performed until it becomes far too difficult to complete and fails, resulting in the Warden forcing Playa out if its body, recovering some of its health and reactivating it's shields, and resuming combat.

The Kill Move is the only ability that can be used to completely eliminate Wardens, as they cannot be killed by any other means of attack. As soon as a direct flight path to the incapacitated Warden becomes available, the key to initiate the kill move appears on screen and the only other action Playa can do is move until they are out of the line of sight, the Warden recovers or the Kill Move is performed.

If the Warden recovers from its incapacitation, the Kill Move will be slightly easier to execute when it is incapacitated again.

Super Homies can use their Super Powers to remove the Wardens' shields and can help to damage and incapacitate them. A full party of Super Homies is capable of quickly incapacitating a Warden without aid from Playa, which can make dealing with Wardens a much simpler task. Even on Hardcore difficulty, a Super Homie can engage a Warden one on one, although this would take a long time and would be better if Playa helped to eliminate the Warden sooner. Super Homies would also perform better with SMGs and Rifles as they can effectively damage and incapacitate Wardens at range. 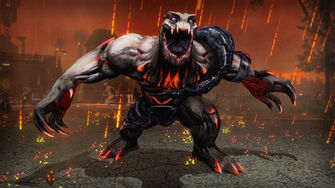 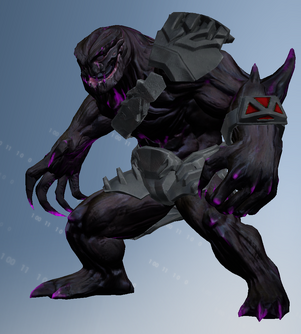 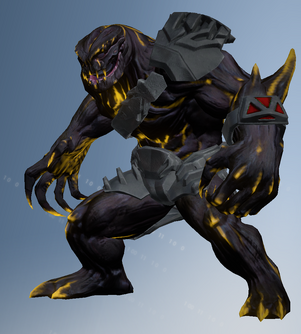 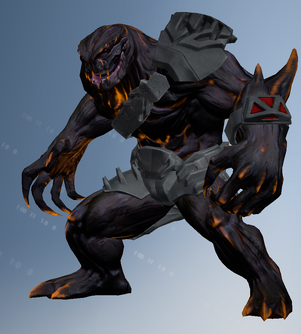 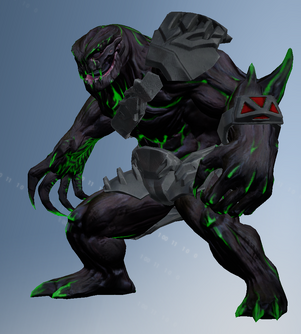 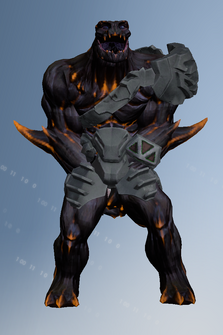 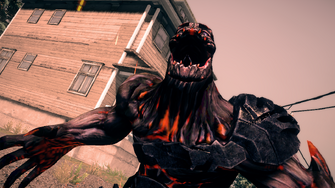 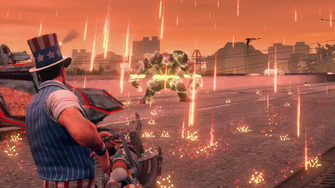 Playa fighting a Warden with the Merica gun 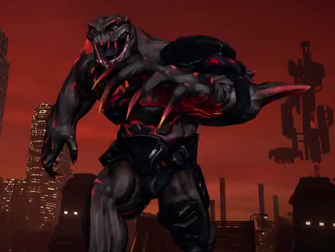 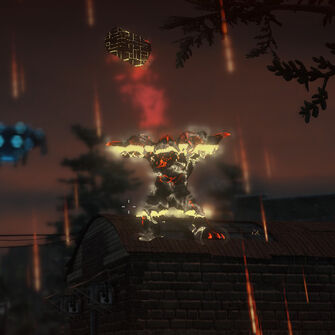 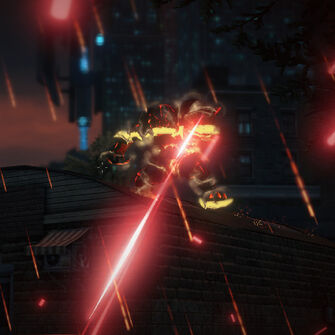 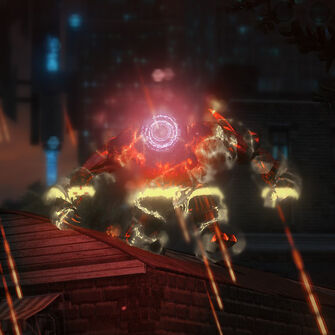 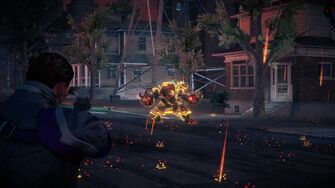 Warden that is protected by a Shield 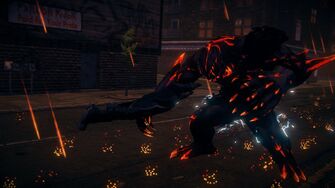 Performing a Kill Attack on a Warden 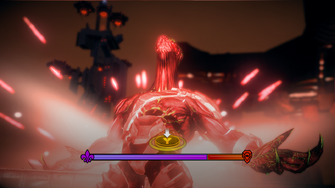 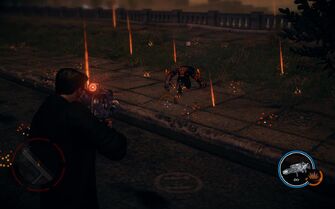 This article contains no references. See Help:Cite.
Retrieved from "https://saintsrow.fandom.com/wiki/Warden?oldid=425868"
Community content is available under CC-BY-SA unless otherwise noted.