The Viper Laser Rifle is a weapon in Saints Row: The Third.[1]

STAG's rifle utilizes laser technology to eliminate the need for reloading clips. Watch out for overheating.

A highly-advanced weapon, it is a laser rifle, and serves as the primary assault weapon of STAG. As such, it can aquired by killing or disarming them with the Human Shield. By default, the Viper fires somewhat sluggishly, but deals reasonable damage; It has better accuracy than the K-8 Krukov and deals more damage as well (though it is less damaging and less accurate than the AR-55. As an energy weapon, the Viper has no need for magazines and can continue firing as long as there is ammunition for it, though it's necessary to carefully control the firing rate to avoid excessive heat buildup. If the weapon overheats, it is rendered inoperative until it fully cools down.

The Viper gets considerably better with upgrades, which improve its accuracy and dramatically improves its fire rate. Fully upgraded, the Viper strikes a perfect balance between the speed of the K-8 Krukov and power of the AR-55, making it an excellent weapon for most combat situations, though it loses out to the other rifles on some category or another: The K-8 fires quicker and can rack damage up quicker as a result, the AR-55 and TOGO-13 do more damage and have better accuracy, and all of the above weapons are magazine-fed, which makes them much quicker to get back into the fight after spending a magazine than the Viper does after overheating. 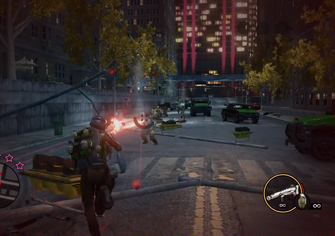 Combating some Luchadores with the Viper Laser Rifle 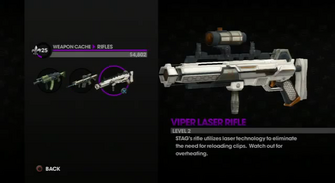 The Viper Laser Rifle in the Weapons Cache 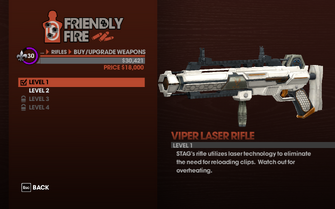 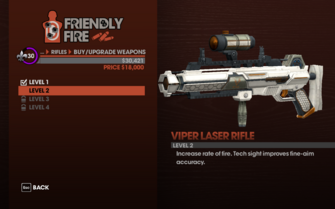 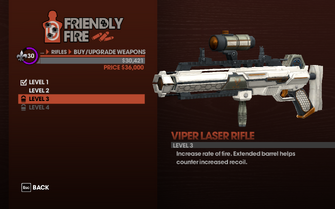 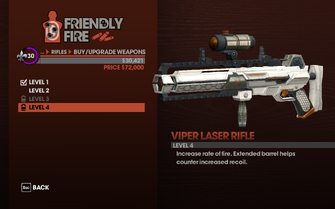 This article contains no references. See Help:Cite.
Retrieved from "https://saintsrow.fandom.com/wiki/Viper_Laser_Rifle?oldid=316913"
Community content is available under CC-BY-SA unless otherwise noted.