Vehicle Theft is a Diversion in Saints Row: The Third. In Saints Row IV, it is known as Virus Collection.[1]

The objective of the Vehicle Theft is to hijack specific vehicle and drive it back to drop-off point. The player is awarded Cash and Respect/XP for completing each task.

Accessible from the Saintsbook menu in the Cellphone, Vehicle Theft tasks the player with delivering certain vehicles for clients.

Vehicle Theft can be difficult as some of the vehicles are difficult to obtain, either because they spawn a great distance from the Chop Shop, or due to the large amount of Notoriety that comes with stealing the vehicle.

After completing "My Name is Cyrus Temple", the bridges to the Downtown District become raised after martial law is declared by STAG, making it difficult to deliver vehicles that suffer from poor performance or low damage thresholds. It is recommended to complete as many Vehicle Thefts as possible before completing the mission.

The Diversion is returning in Saints Row IV, but is renamed to Virus Collection. Unlike Vehicle Theft in Saints Row: The Third, when specific vehicle is delivered to drop-off point, the player gets that vehicle as award.

Also, as every Target Diversion, Virus Collection is needed for City Takeover.

In addition to starting Virus Collection from locations marked on the map, it is possible to start them from the Side Quest menu in the Hub.

There are various differences between Vehicle Theft and Chop Shop, most of these differences are similar to Hijacking.

There are 30 Vehicle Theft targets. 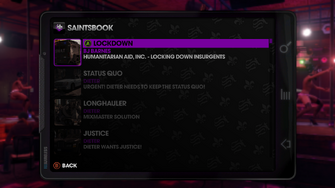 This article contains no references. See Help:Cite.
Retrieved from "https://saintsrow.fandom.com/wiki/Vehicle_Theft?oldid=411897"
Community content is available under CC-BY-SA unless otherwise noted.