This article covers a variety of Vehicle Controls.

See the Controls article for a full list of controls.

If there is a driver in the vehicle, The Protagonist automatically hits them and throws them out of the vehicle.

In Saints Row and Saints Row 2, it is possible to fast enter any vehicle by standing on top of them while pressing the Enter button. While some consider this to be a "glitch", it is a deliberate function which was added to the game after the Saints Row demo. This functionality was removed from Saints Row: The Third onwards.

Cars are able to take a certain amount of damage before they begin to smoke, and, with enough damage, eventually catch fire and then explode.

Fully reinforced cars can take up to at least 20 percent more damage than a regular car. For example, usually 1 shot with a pistol to a tire is enough to make it burst, but reinforced tires can take 2-4 Shots.

Objects such as, mirrors, headlight pieces, reinforced pieces, bumpers, doors, and other objects on the car may fall off due to damage (bullet or crash). Reinforced frame may prevent these objects falling off. Any car windows can be smashed.

Vehicles can be repaired at Car Mechanics. When retrieving a damaged car from the garage, there is a prompt to repair it for a certain price, depending on the amount of damage. Light damage is automatically repaired when retrieving a vehicle, or during Vehicle Customization. It is not possible to customize a damaged vehicle without first repairing it.

After moving the camera manually, it can be quickly reset by clicking the look left/right/behind controls.

The Cruise Control system allows for a car to be locked at a certain speed. This can be useful for maintaining slower or faster speeds, and can be very useful in the Drive-by Diversion.

Speeding up or slowing down does not turn off cruise control, it changes the set speed. Using a Nitrous deactivates Cruise Control.

When exiting a vehicle without turning Cruise Control off, the car continues driving forwards at the same speed. This feature can be extremely helpful when trying to achieve max 'Car Torpedo' as the vehicle can be aimed down the street to wreck everything in its path.

Powersliding is a maneuver that allows one to make sharp turns without losing much of their speed. To powerslide, hold the emergency brake while driving at high-speed and turn in the direction one wishes to powerslide.

After level 3 Notoriety, running blockades can be difficult. In a lighter vehicle that doesn't have much durability, it is best to go around blockades, rather than through them. In a meatier vehicle such as a van or a truck, it is possible to simply bash through the blockade by aiming the center of the car in the small opening between two of the vehicles forming the line.

A quick and effective tactic for eliminating enemy cars is to simply stop, causing them to crash and fly through their windshield.

Throughout Stilwater runs a network of train rails that can be accessed from the bridges of the train stations. The rails are a good place to drive as it avoids traffic and usually enemy vehicles won't follow.

There are many Boats in Saints Row 2 and Saints Row: The Third, this section is a guide to watercraft manoeuvres and related activities.

Watercraft have the same controls as land vehicles.

There are many ways to capture many ships of Saints Row 2. For capturing smaller, open-topped, ships, it is easier to get directly in front of or behind the target boat and headshot the driver. An easy way to capture larger ships or the close-topped Hurricane is to drive up to them and throw a Satchel Charge onto the side of the boat. Hurricanes only take one charge but Skippers or Convicts take 2 or 3.

There are several tunnels that run under Stilwater that can be used to travel to new areas quickly without having to go around the whole island. 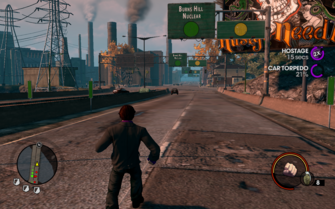 Hostage on Cruise Control in Saints Row: The Third 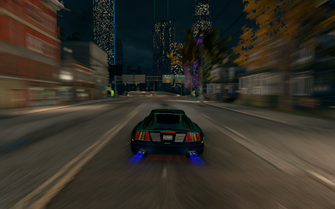 This article contains no references. See Help:Cite.
Retrieved from "https://saintsrow.fandom.com/wiki/Vehicle_Controls?oldid=412205"
Community content is available under CC-BY-SA unless otherwise noted.