Troy Bradshaw is a character in Saints Row, Saints Row 2 and Saints Row: Gat out of Hell.[6]

I don't like the idea of Lin going undercover, you roll with people long enough and pretty soon you start thinkin' like 'em...

Troy is the second in command of the 3rd Street Saints leader Julius, and along with Julius rescue Playa from a gang turf war between the three rival gangs in the Row[7]. Troy is in fact an undercover cop[8] working for Chief Monroe, and the game's manual is written from Troy's perspective.

During the events of Saints Row 2 he is the chief of police for the Stilwater Police Department. He is in several cutscenes and isn't happy with his boss Dane Vogel supporting gangs in the city[9][10], although he does try to cover up the 3rd Street Saints' criminal activities[11]. In wiretaps inside the Stilwater Police Department reveal that Troy was told by Dex about the fact he knew he was undercover and was leaving the Saints to work for Ultor and that Troy tried to convince Julius to convince Playa and Johnny Gat to walk as he didn't want to arrest his friends, but wasn't happy with the fact that Julius chose to blow up the yacht putting Playa in a coma and also leading to the death of Richard Hughes[12]. This leads to Playa getting revenge on Julius[13].

Troy can also be unlocked as a Homie in Saints Row 2 after completing the Fight Club activity at the Stilwater Penitentiary.

Troy is mentioned[14][15], but does not appear in Saints Row: The Third and he is also absent in Saints Row IV.

Troy appears in a "Torment Fraud" activity for Saints Row: Gat out of Hell as the playable character.[6]

Troy is the sarcastic joker[reference?] of the Saints and always has snide remarks.[16] When he later becomes chief of police, he does not lose his sense of humor.[reference?] Troy is a chain-smoker.[17][9][11]

Troy along with Julius rescue Playa, who is caught up a in a gang turf war between the Vice Kings, Los Carnales and the Westside Rollerz while walking through Saint's Row and although Troy tries to urge Julius that they should get moving, Julius offers Playa a chance to join the Saints and meet at the Saints Row Church[7]. When Playa arrives at the church, Troy agrees with gang member Johnny Gat that Playa should be canonized, and after Playa is finished battling 3rd Street Saints members he is allowed in[18]. Troy and Playa then go around the Row to clear out the gangs and takes him to a shop for a gun and they wipe out some Vice Kings members, and Troy then introduces Playa to Forgive and Forget, before getting him to drop him off at Freckle Bitch's[19]. Troy along with Playa and Julius head to Harrowgate to wipe out remaining gang lieutenants, and finally reclaim the Saint's Row district[20]. Back at the church when Julius reveals his plans to wipe out the gangs from Stilwater he appoints Troy to look into the Vice Kings but he refuses to Julius' annoyance, until Johnny volunteers to look into them and under the watch of Dex[21].

Troy still helps out during the takeover of Stilwater. During the wipe out of the Westside Rollerz Troy goes along with Playa in a race against them, taunting the Rollerz racers to put on their nitrous and set off bombs that are rigged in their cars[22]. He also warns Julius when their leader Joseph Price is leading Westside Rollerz to the Row to destroy the Saints[23].

During the takedown of Los Carnales, Troy goes to look for their main drug plant for Dex[24] and later along with Playa go to hijack the truck and bring it back to the Row[3]. Before doing the job Troy tries to ask Dex why he wants the truck, although Dex refuses to reveal the rest of the plan until Troy and Playa go to get it, and also causes confusion to Dex for his constant questioning[25]. After the death of the Los Carnales leader Hector Lopez Troy suggests to Dex that they should kill the Colombian Cartel member Manuel Orejuela although Dex instead opted to talk to him[26]. When Victor Rodriguez attacks the church, Troy, Julius, Dex and Playa protect it and Victor is killed by Playa[27]. When Dex reveals a plan to attack the police department to get hold of the Carnales' seized drugs in order to work with the columbians, Troy instead suggests to blow a hole in the wall to reduce police casualties, which Dex agrees to[28].

During the takedown of the Vice Kings, Troy sends 3rd Street Saints' members after Tanya Winters, unaware that Playa is driving her around, posing as a chauffeur in order to save Johnny, although he ends up losing them and saves her thanks to Julius warning him[29].

After the Saints manage to rule over Stilwater, Troy gets drunk in Tee'N'Ay[30]. Later on, prior to Playa and Richard Hughes getting caught in an explosion on Hughes' yacht, Troy looks at his police badge, revealing himself as being a cop.[8]

Prior to Playa being put in a coma, Dex told Troy he knew he was a cop and that he was dropping his flags to go and work for Ultor[31]. Troy goes to visit Julius in prison and convinces him to ask Playa and Johnny Gat to drop their flags as he doesn't want to arrest his friends and Julius tells Troy he will see what he can do[32] but Julius instead rigs the yacht and blows it up, putting Playa into a coma and killing Richard Hughes[8]. When Troy questions him angrily about the decision, Julius assures him the Saints are now finished.[33].

During the time Playa was in a coma, Troy ordered to keep him on life support[34]. Johnny Gat attempted to kill Troy in revenge for betraying the Saints but ended up being arrested and put in prison[35]. Troy was then promoted to the chief of police and had Johnny protected inside prison[36]

Playa woke up from the coma five years after the boat explosion[37][38] and saved Johnny during his trial[39] and resurrected the 3rd Street Saints to take back Stilwater from the new gangs that had taken over in the Saints' absence[40].

Troy receives a phone call from Dane Vogel and is ordered to release imprisoned Brotherhood members, and although he is unwilling Dane forces him to do it, which angers Troy[9]. When questioned by Jane Valderamma about the Brotherhood members being released, Troy refuses to give comment and tells her to talk to Dane on the matter[10]. However, Playa destroys the prison trucks containing the newly released Brotherhood members[41].

When Playa and Johnny Gat rob the Poseidon's Palace owned by the gang The Ronin[42], Troy is questioned by Jane on it but he refuses to mention anything about the 3rd Street Saints' involvement[11].

Playa later raided the police station and discovered the wiretaps and Julius' betrayal, and also raided Troy's office and got hold of Dex's phone number, and later went on to take their revenge on Julius.[13]

After the events of Saints Row 2 Troy notices that Stilwater is being torn apart by the 3rd Street Saints. Troy soon finds out that the Saints are in a civil war fighting each other. So with no other choice Troy sends a undercover cop to infiltrate the Saints to find out what caused the civil war and the solution to stop it.

In between Saints Row 2 and Saints Row: The Third Troy had continued to help the 3rd Street Saints by covering up their crimes.[15]Despite this, he isn't able to interfere when the Saints are attacked by Morningstar and SWAT teams while attempting to rob the Stilwater 1st National Bank, which leads them to being in Steelport.[14]

By the events of Saints Row: Gat out of Hell Troy is deceased.[6] Troy is residing in Hell as a husk by the time of Johnny Gat and Kinzie Kensington's arrival in Hell. He is in the deepest part of Hell, reserved for betrayers, in part of having a torn allegiance between the Saints and the Stilwater Police Department[43][44]

Troy is a playable character in the Medium instance of Torment Fraud. As with Tobias and Luz, Troy is an unvoiced generic husk model.

— After cleaning up Saint's Row with Playa.[19]

Troy: "I got a lead on where the Los Carnales cut all their shit."
Dex: "The Carnales."
Troy: "Wha?"
Dex: "Rio Grande River. Jesus."
Troy: "What the fuck?"
Dex: "It's not THE Los Carnales, it's just the Carnales. Los means... fuck it. Like I was sayin', we're not gonna raid the factory quite yet."


— Troy getting called out on his mistake at prouncing the Carnales name.[3]

Yeah, Gat needs to learn how to take a joke.

I better not see any of this in the news.

Just becase you cleaned these gangs out doesn't mean we are best friends again.

You never could drive.

— Troy's reaction if the player crashes their car.

Don't worry it wasn't your fault.

— Troy's reaction if the player crashes their car. 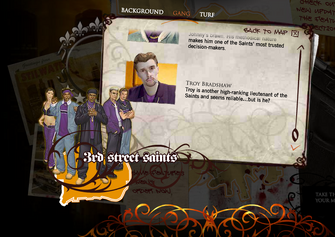 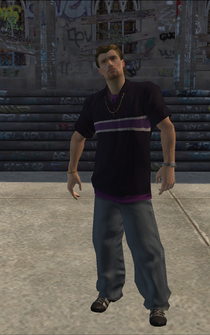 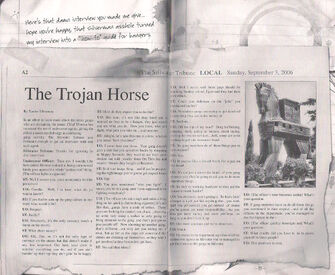 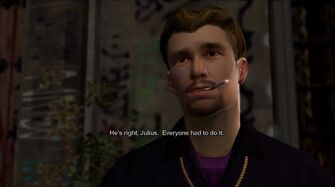 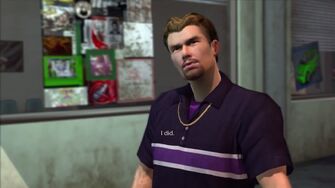 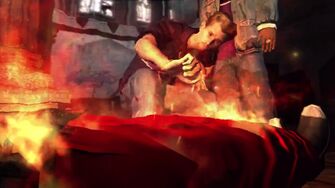 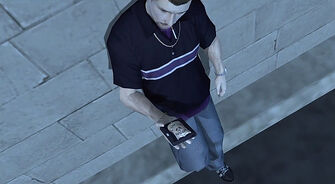 Troy looking at his police badge in Saints and Martyrs 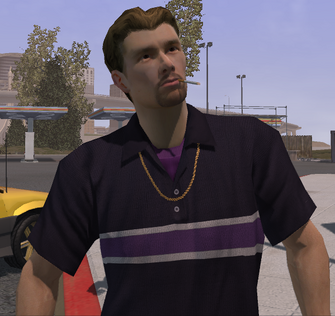 Troy as a homie in Saints Row 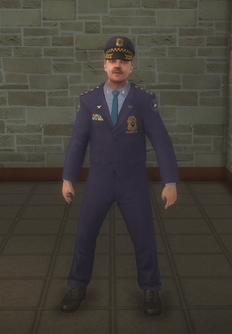 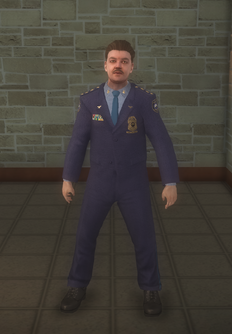 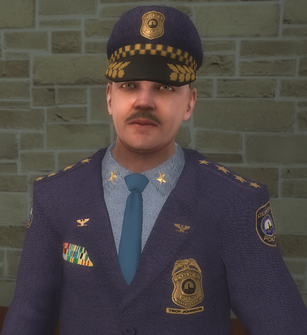 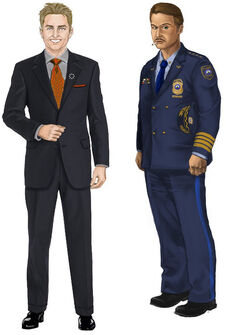 Concept art of Troy as chief of police, with Dane Vogel, in Saints Row 2 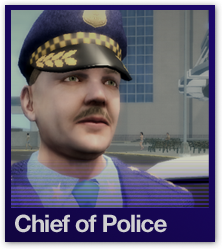 Troy being interviewed by Jane Valderamma 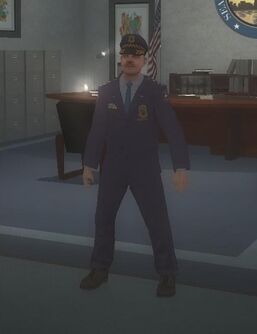 Troy at his office in Police Headquarters 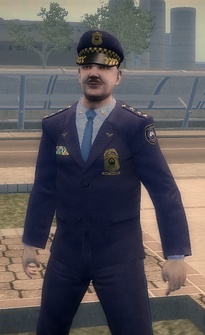 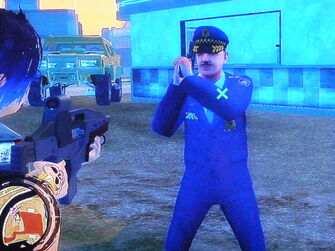 Troy with a Pistol in Saints Row 2 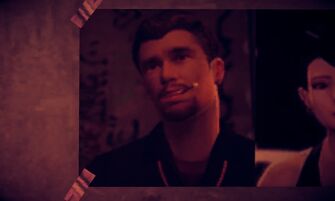 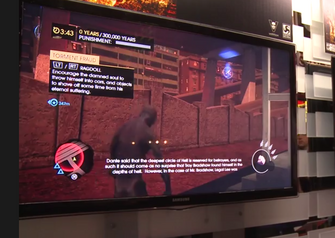 Troy in Saints Row: Gat out of Hell activity "Torment Fraud" as a damned soul

• List of Missions and Cutscenes to check
Retrieved from "https://saintsrow.fandom.com/wiki/Troy?oldid=425872"
Community content is available under CC-BY-SA unless otherwise noted.