"Traffic Control" is the first of three missions in the Corporate Warfare DLC.

Ultor CEO Eric Gryphon (Dane Vogel's replacement) meets with Pierce at $tock$, expressing his interest in meeting with The Protagonist. Gryphon needs the 3rd Street Saints to provide him protection from Dex's Masako. In return, Gryphon will provide The Protagonist with information on Dex, who had previously tried to kill The Protagonist and Julius in a church[1].[2]

The Protagonist successfully defends Gryphon's Status Quo from an Oppressor and escorts him to the Saints Hideout. Sometime after the events, Gryphon meets Dex outside the Phillips Building, with Gryphon coming to the assumption that Dex can't have him killed at work. Gryphon warns Dex that he's out of his league, and Dex replies that Gryphon is out of touch.[3]

Known philanthropist Eric Gryphon has miraculously survived a brutal car crash that has left dozens dead. While Mr. Gryphon was unavailable to comment, his co-worker and close friend Dexter Jackson says this of the ordeal, "I'm just happy that Eric is ok.". In unrelated news, police have been unable to figure out how several hundred shell casings appeared on the Stilwater Freeway.

A Side Shooter escorts Eric Gryphon to the Saints Hideout via the Stilwater freeway. Gryphon is inside an armored Status Quo and is assaulted by the Masako in FBI SUVs, Bears, Oppressors, and a Tornado.

Rescue Gryphon and get back to the Saints Hideout

After Gryphon's driver is killed, the helicopter circles around the stationary limo a few times; try and kill as many enemies as possible. Eventually, a Tornado shows up and destroy the helicopter, causing it to crash. Head towards the limo and get in a nearby Bear APC (using another vehicle runs the risk of it getting destroyed quickly by a Tornado), wait for Gryphon to get inside, and head to the Saints Hideout. 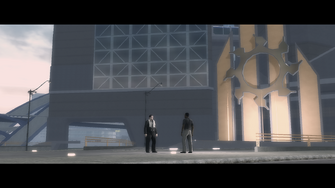 Eric Gryphon and Dex meet outside the Phillips Building, where they discuss the events of the mission
Traffic Control - Limo Armor HUD.png
Gameplay from the mission

This article contains no references. See Help:Refs.
Retrieved from "https://saintsrow.fandom.com/wiki/Traffic_Control?oldid=339696"
Community content is available under CC-BY-SA unless otherwise noted.