"Tidal Spring Apartments" is a Stronghold in Saints Row.

Some of the Rollerz have a court date coming up, and Sharp is throwing paper and pussy at the jury to get them off. Go to the apartment building they're sequestered at and dismiss some jurors.

Julius Little phones The Protagonist and briefs them on killing some corrupt jurors that are being bribed by William Sharp to go easy on some Westside Rollerz gang members that are under conviction.

Using his connections before his death, Sharp was able to pay off the jury for a trial concerning several Rollerz. Not wanting to let the Rollerz get off, Julius sent you to the apartment complex the jury was sequestered at so you could dismiss them.

Kill all the jurors that the Rollerz are protecting.

There are five different jurors to kill in two different apartment blocks; one apartment block has three jurors in while the other has two. While the jurors themselves don't provide any kind of challenge, there is heavy resistance from defending Westside Rollerz.

Killing any two of the five jurors, triggers five units of Notoriety, and SWAT units are dispatched, providing a greater challenge than the Westside Rollerz. 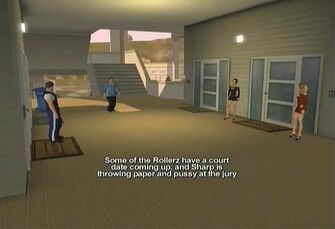 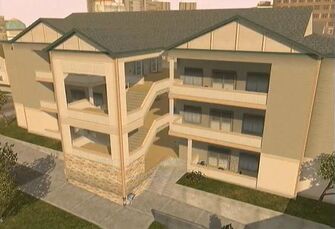 One of the apartment buildings the Stronghold takes place in

This article contains no references. See Help:Cite.
Retrieved from "https://saintsrow.fandom.com/wiki/Tidal_Spring_Apartments?oldid=413253"
Community content is available under CC-BY-SA unless otherwise noted.