"Three Kings" is the fourth mission in Saints Row 2.

As they remove the dead bodies from the newly established Saints Hideout, Playa and Johnny Gat discuss forming the crew. Playa remembers Carlos, and Gat notes some people he met when he was in jail, but warns that Playa needs to prove themselves first.[1]

After recruiting Shaundi, Carlos, and Pierce, they return to the Saints Hideout to find Gat canonizing some new recruits. In a scene reminiscent of the "Divide and Conquer" cutscene in the Saints Row mission "Reclamation", Playa takes charge and gives a short speech on wiping out all three opposing gangs and retaking Stilwater. They assign Pierce to handle The Ronin, Shaundi to handle the Sons of Samedi, and Carlos to handle The Brotherhood. With the mission finished, the player is given their first real choice in the game: what gang do they want to take out first?[2]

Apparently, it has all been leading up to this. It began with a presumably benign prison break, but it has ended with the resurrection of the dreaded Third Street Saints. Residents have reported multiple sightings of the purple clad crew roaming the area, doing anything and everything to impress possible recruits -- from gang related killings to dangerous joyriding. The gang has kept relatively quiet, but we at the Stilwater Gazette can only assume this is indeed just the calm before the storm.

Go to the Suburbs

There are three lieutenants located in the Suburbs District to be recruited into the 3rd Street Saints. They can be completed in any order, and each of them introduce a different gameplay mechanic.

A Kenshin and Compton are parked outside of the Saints Hideout, in addition to whatever vehicle was parked there before beginning the mission.

Recruit Lieutenants for the Saints

When playing the mission in co-op, both players must be together to start each lieutenant's request.

The mission ends once all three lieutenants have been recruited.

Jane Valderamma: "Like Saint Nick stuffing candies in a child's shoe, an annonomus individual hid goodies of a different sort in the Stilwater River. This morning bodies of several homeless as well as those belonging to astreet gang known as "The Sons of Samedi" were found floating down the coast. Could this be a bloody portend of things to come? Only time will tell. I'm Jane Valderamma, channel 6 news."

Hey I'm Shaundi, whaddya say you show me what you can do in that thing?

Good times, good times...whenever you're getting everyone together let me know, I'd love to roll with you guys.

— Shaundi, after completing the jumps if there are other lieutenants remaining


— After completing the jumps if Shaundi is the final lieutenant

Shaundi: "Why don't you try drivin' the wrong way?"
Shaundi: "I bet this heap can get some air, let's find a jump?"
Shaundi: "How close you think you can get to that car?"
Shaundi: "Pull the handbrake and take some corners..."
Shaundi: "Good times, let's go..."

Back when I was in jail Johnny and I set up a pruno ring. The stuff had a 20% chance of makin' ya go blind, but man did it have this great oak-y flavor ya know what I mean? Well, ya probably don't 'cause you were in a coma but you get what I'm sayin'. The point is that I was the only person who could make the stuff without killin' somebody, so I'd handle the pruno and Johnny would just beat the hell outta people until they'd buy from us...it's was pretty cool...

I'd love to help the Saints but first I need you to do me a favor...a deadbeat friend of mine owes me money. Can you help me repossess his car?

— Carlos, upon meeting him

Carlos makes a phone call
Carlos: "Hey Ramon, what's up?"
Carlos: "Listen I don't got a lotta time I was just calling to let you know that I stole your car."
Carlos: "Are you there? Great. Here's the deal, if you don't want your car cubed I really suggest you pay me what you owe me...talk to ya later Ramon."


— While towing the car


— After dropping off the car if there are other lieutenants remaining


— After dropping off the car if Carlos is the final lieutenant

So where you want me to meet you and Gat?

Carlos: "So you're actually putting the crew back together huh?"
Carlos: "Hell yeah...but first let's kick it to Technically Legal, I haven't had a chance to relax since we busted out."


— Unused dialogue from start of mission

When Julius formed the Saints, my brother was one of the first to join up. He wasn't as smart as Dex, or as tough as Johnny, but he was loyal. He believed in the Saints enough to die trying to defend their church. The Saints need to reclaim this city because I don't my brother to have died for nothing.[sic] [4]

Sup, I'm Pierce, if I'm gonna run with you I wanna see you fuck some Ronin' up...

— Pierce, upon meeting him

Pierce: "I'm definitely down for bein' with your crew."
Playa: "Good, meet me at the abandoned mission house."
Pierce: "I'll be there."


— After killing the Ronin if there are other lieutenants remaining


— After killing the Ronin if Pierce is the final lieutenant

Playa: "What the hell is going on?"
Johnny Gat: "I had to do some canonizing. Hold up..."
Johnny Gat: "You...you're next."
3rd Street Saints gang member: "Wait, what?"
Johnny Gat: "Sorry 'bout that."
Protagonist: "Where'd you find these guys?"
Johnny Gat: "Like I said, I made some calls..."
Carlos: "You guys actually hang out down here?"
Shaundi: "I dunno...add a flat screen, some throw pillows and a hookah and this place would be alright."
Pierce: "You definitely need a stripper pole in this bitch."
Johnny Gat: "Definitely."
Carlos: "Yeah."
Playa: "Oh yeah."
Shaundi: "So whatta we do now?"
Johnny Gat: "We listen."
Playa: "Alright, everybody listen up, we got some serious shit to discuss. The Saints used to own Stilwater and it seems like the only muthafucka's that remember that is me and Gat. I think it's time we give those other crews a wake up call."
Playa: "Now I ain't gonna lie, a lotta shit's changed since I've been outta the game, so I'm gonna need some help. Pierce, you're on the Ronin. I wanna know who's callin' the shots and what businesses they're running."
Pierce: "Done."
Playa: "Shaundi, you got the Sons of Samedi."
Shaundi: "It's gotta be them?"
Playa: "Fuck you say?"
Shaundi: "It's cool...I...I got this."
Playa: "Carlos..."
Carlos: "The Brotherhood, I'm on it."
Playa: "'Aight. Once we're done here talk to one of these guys...they'll have something for you to do. It's our time now...let's get this shit started." 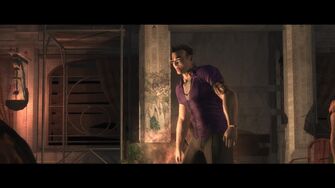 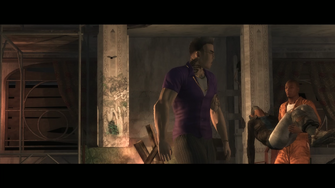 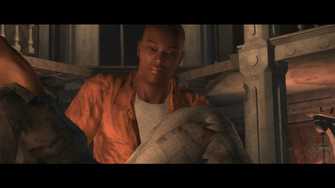 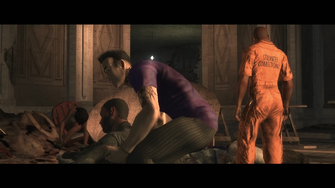 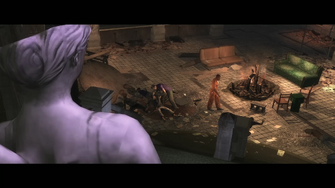 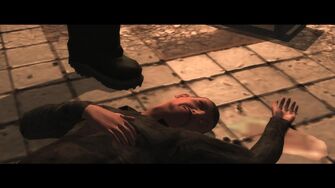 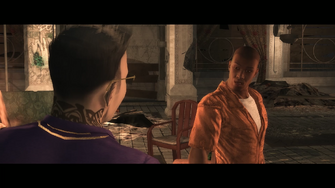 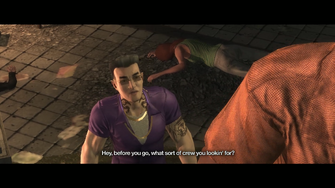 Gat asks Playa what sort of crew he is looking for 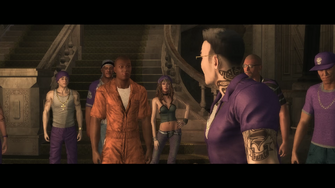 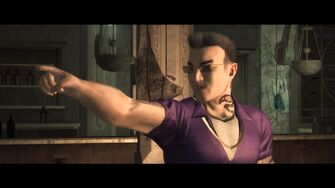 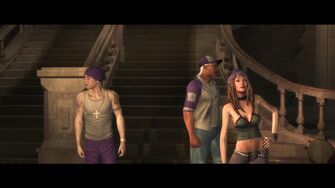 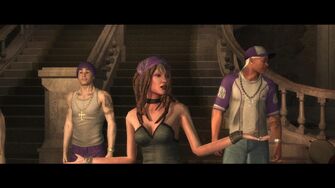 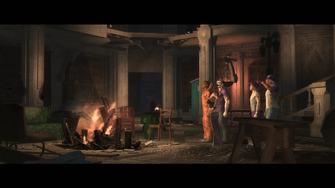 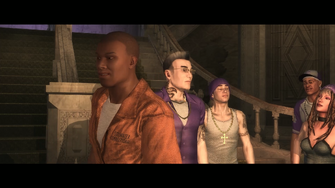 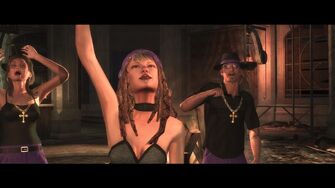 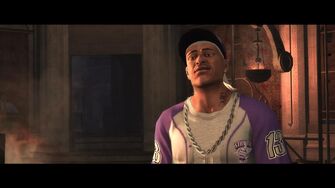 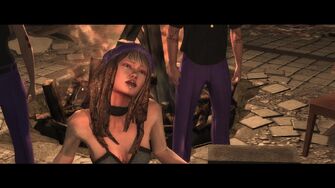 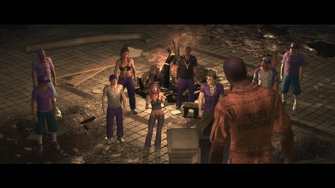 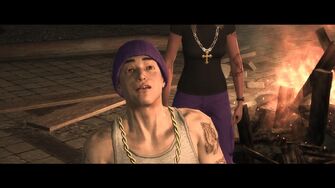 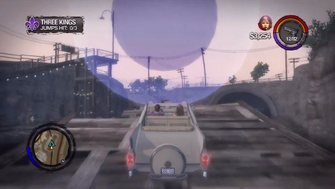 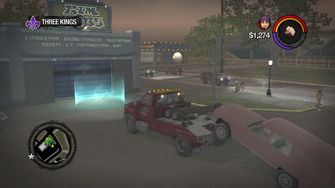 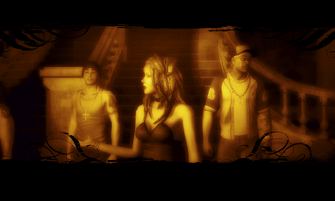 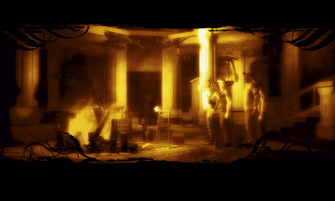 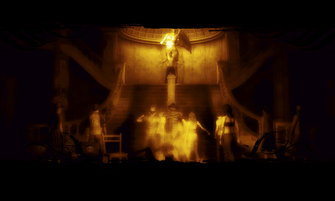 This article contains no references. See Help:Cite.
Retrieved from "https://saintsrow.fandom.com/wiki/Three_Kings?oldid=425224"
Community content is available under CC-BY-SA unless otherwise noted.