Saints Row Wiki
Register
Don't have an account?
Sign In
Advertisement
in: Stubs, Missions in Saints Row IV: How the Saints Save Christmas

Edit
watch 02:53
GTA: The Criminal Enterprises - The Loop
Do you like this video?
Play Sound

This article/section is a stub. You can help Saints Row Wiki by expanding it.

How the Saints Save Christmas

The Santa Clawz is the third and final mission in Saints Row IV: How the Saints Save Christmas.

Future Shaundi informs Playa that Clawz is held up under a shield gaining strength and will be unbeatable by midnight unless they can deliver cheer to the people of Steelport, which will allow them to fight Clawz and hopefully save the Saints from the hell Future Shaundi and the other future Saints have suffered.

Playa takes control of Sleigh One and flies around locations in Steelport, delivering presents, with Santa reminding them to deliver coal as well. Santa tells Playa they have come a long way, but must learn to embrace the Christmas spirit. Future Shaundi warns Playa that Clawz has set the weather against them, hindering their line of sight if they fly too high. Playa, undergoing a change of heart, gets surprised when called "Junior Santa" during the first delivery location. At the second location, they call for people to wake up and get their presents, arguing that Santa shouldn't have to deliver presents when people are asleep as people believe in him. Santa replies that Mrs. Claus makes him do it when everyone is asleep due to a mother kissing him. At the third location, Playa starts singing Christmas songs and gets Santa to ask for permission to use their song.

After Playa delivers the presents, Future Shaundi tells them that the shield is becoming weaker. Santa reminds Playa to continue to embrace the Christmas spirit, before Future Shaundi tells Playa to hurry. They fly to the area outside the Syndicate Tower, where Clawz fires snowballs at them and destroys the Sleigh. They light the candles with Fire Blast attacks and Stomp on the festival pole. Future Shaundi then says that they all need to "bitch" at each other, making Santa moan about how he hates the diet cookies his wife cooks. Kinzie then butts in and complains about how she gets nothing in return for all the hard work she does, but is soon shut down when Playa reminds her that The Ship was her gift. Kinzie asks Pierce if he has anything to bitch about, but he surprises Playa when he confirms he's cool, making Santa happy, but the shield remains.

Mrs. Claus suggests to continue delivering the presents, prompting Kinzie to send in a new sleigh. Santa playfully remarks how Kinzie could easily put him out of Christmas, though she reassures him. Playa delivers the presents to the people in the area, which makes Clawz more desperate as he converts more people to Gingerbread men. The shield eventually falls and the people stand up to Clawz to embrace the holiday spirit, with results in them being dismembered. Playa tries to kill Clawz but the attack proves ineffective. Santa says that he's protected by those on the naughty side, prompting Kinzie, Mrs. Claus and Future Shaundi to give Playa presents to defeat Clawz.

Playa charges into Clawz and Super Jumps into the air with him, letting Clawz fall to his death as he gets impaled onto the star on the Christmas tree, which lights up and destroys Clawz as the star and tree shines bright. Santa warns Playa that they can't murder their way onto the nice list and picks up on Playa originally not believing in him, but thanks Playa for saving Christmas. Santa then tells Playa that it takes more than one good deed to show a change of heart, which Playa sadly agrees with, but Santa points out that the night ain't over and there's still time to change and to make their way onto the nice list. As Playa looks at the Christmas tree, Santa flies off in his Sleigh, with Playa quickly running to see him fly away.

Playa is then seen doing Christmas related activities. They have a snowball fight with Shaundi and Pierce, make a Snowman with a sweater and Shokolov AR to Johnny Gat's approval and snow angels with some of the other crew members, feed homeless people, sing Christmas Carols with Asha and Matt Miller and give Kinzie her gift, getting a hug in return. After The Saints pose for a photo together, Playa also goes to pose in front of the Steelport sign, waving to all the people they walk past, and visit Benjamin with a sign to compliment him. Lastly, Playa sets up Christmas lights with Shaundi, puts a star on top of a Christmas tree, and raises donations which shows Playa's heart growing substantially. The Saints are then seen waving goodbye to Santa as flies up towards the moon, ending the story.

After the ending screen, Santa finally wakes up from his Simulation, but finds himself lost on the Zin Ship. Wondering where the Saints are, he notices his nakedness and uses his hat to cover himself before the mission completion screen. 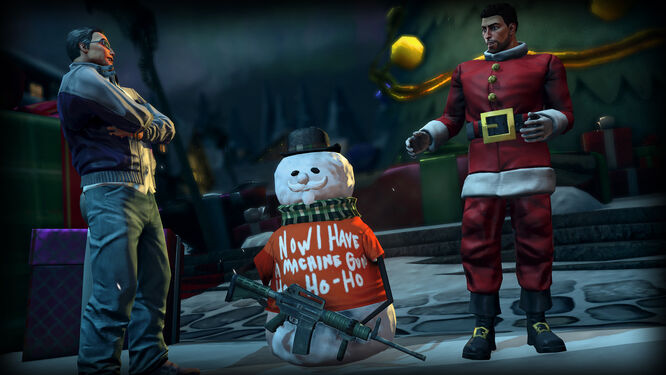 1/12
Community content is available under CC-BY-SA unless otherwise noted.
Advertisement