"The King and I" is the tenth and penultimate mission of the Vice Kings story arc in Saints Row.

I know where all them fools hang. All we got to do is roll up in there, get their attention, then lead them to the cops. They'll take care of the rest.

— Benjamin King to Playa, while at a meeting in the church with Julius Little and Johnny Gat.

At the church, Julius Little holds a meeting with Benjamin King, Playa and Johnny Gat, and gives King an ultimatum: "keep [his] fuckin' pride and die right now, or [...] be a man and walk away". King chooses neither, and instead opts to kill Tanya first, and then walk away. Julius agrees, and sends Playa with King downtown.[1]

There, they lure several Vice Kings to a police ambush site, severely weakening the gang and paving the way for King to reach Tanya when he's ready. King thanks Playa, and muses on what they could have accomplished together had Playa joined the Vice Kings instead.

Way to go, son. It's a shame Julius found you first. We coulda owned this town.

Given the choice by Julius to either leave town or get shot, Benjamin King decided for a third option of leaving town after he gets even with Tanya. Agreeing, Julius sent you to drive King around to Vice Kings hideouts and get them to follow you into waiting police traps. After the gang was weakened, it would be time to deal with Tanya.

The premise of this mission is to gain the attention of some Vice Kings and lure them to a point on the map, whereupon the police automatically kill them. This needs to be done three times.

Go to the Kings' hideout.
Get the Kings to chase you. Don't kill their driver or car.

The first group is very easy to lure to the ambush site; simply shoot any Vice Kings gang member who does not have a green arrow above their head, wait for one who does to get in the nearby marked car, and drive away, making sure not to drive too far away from the vehicle.

Lead them to the police ambush.

The vehicle takes a lot of damage here, as fighting back fails the mission, so keep up the pace and lead the enemy to the site to finish them off.

Go to the Kings' hideout.
Get the Kings to chase you. Don't kill their driver or car.

The second group is slightly more difficult as they are further away from the ambush point, which means the longer drive back entails more damage received to the vehicle.

Lead them to the police ambush.

When reaching the second group, they are immediately hostile, unlike the first, due to Notoriety.

Go to the Kings' hideout.
Get the Kings to chase you. Don't kill their driver or car.
Lead them to the police ambush.

The third group is fairly close to the ambush point but is the most hassle because of their firepower and the high level of Notoriety. As such, consider changing vehicles before getting there.

After leading the third group to the ambush site, the mission ends, and the Saints take over the Brighton neighborhood in the Downtown District.

The mission can be failed by getting smoked or busted, abandoning/killing King,[2][3] destroying a marked Vice Kings vehicle,[4] or killing its driver.[5]

Jack Armstrong: "Jack Armstrong here, a follow up to the story we brought you earlier. Lots of Vice Kings dethroned today by Stilwater's finest. We've been standing by, waiting for comments, and... er, they are... they are ready now, yes? Okay. So we take you now to police headquarters where Chief Monroe is ready with his comments."
Chief Monroe: "Hello. Earlier today, an as-of-yet unidentified man who's being pursued at high speeds by perpetrators who were later confirmed to be Vice Kings. Despite the stressful and dangerous nature of this situation, this citizen kept a level head and contacted the police immediately. Once informed, we were able to respond quickly and in so doing were successful in the apprehension, detention, and in a few cases, termination, of some of the most notorious criminals in this city. Today a great victory was achieved in the war on crime. And if the citizens of Stilwater remain vigilant, we are sure to see many more. Thank you for your time."
Jack Armstrong: "What you have been listening to was the live feed of a press briefing held by Chief Monroe regarding the gunfire heard at several police buildings today. He took no questions, and as I watch the video monitor here in the studio, he is already back inside tending to the needs of the community. We'll have more details here in the newsroom as they become available. I'm Jack Armstrong."

Aight, let's get this shit started right. One of the safe houses is at the north end of town.


— Before and after each group

— After being shot at

— After killing an enemy

— After running over someone 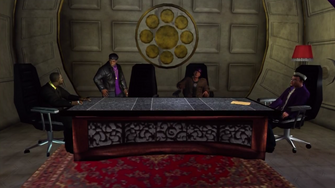 A meeting at the church between Benjamin King, Julius Little, Playa, and Johnny Gat 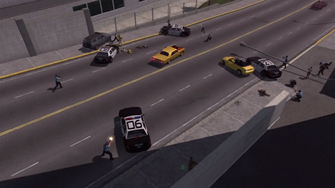 The police ambush the Vice Kings 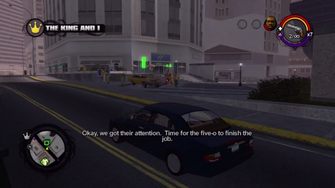 The King and I - we got their attention

This article contains no references. See Help:Cite.
Retrieved from "https://saintsrow.fandom.com/wiki/The_King_and_I?oldid=425042"
Community content is available under CC-BY-SA unless otherwise noted.