The General is a character in Saints Row 2.

Gentlemen I'm through meeting with "my adversary". If you please, dispose of this trash.

— The General, upon confronting Playa for the first time.[2]

The General is a cool-tempered and polite gangster, who often refers to his men "gentlemen" or "sir". He always dresses in a white suit which displays the trim of his flags, and frequently smokes fancy cigars. Despite his professional appearance, The General is a ruthless warlord known to control his gang through fear and intimidation. He expects utter loyalty from his minions, and often resorts to mutilation as a form of punishment for anyone displaying insubordination or failure within the ranks[3], and orders Veteran Child to slice off the hand of a drug dealer who fails to turn over his profits on time[4].

The General remains calm and calculated even when his business operations start falling apart thanks to the 3rd Street Saints. Despite all the setbacks, he continues to lead and direct his minions with an iron fist. Mainly, it's still just business as usual, but once someone gets his attention he never hesitates to deliver the full war capabilities of the Samedi.

The General spends his time driving around Stilwater in the back of a green, bulletproof Hounfor. From there, he oversees all the Samedi's drug activities, and passes down his orders through his right-hand man Mr. Sunshine, who frequently rides with him as an enforcer. Aside from his limo, The General also owns a customized, army-issue Bulldog with a top-mounted Mini-Gun[5].

After conquering the Caribbean drug underworld[6], The General and his minions moved their sinister operations to Stilwater to fill the drug void left in the wake of the destruction of Los Carnales. While Playa lay in a coma at the Stilwater Penitentiary, the Sons of Samedi gained dominance in the central districts of the city and began pushing out a designer drug called Loa Dust onto the streets. This so-called "Loa Dust Market" soon became the Samedi's primary source of income, and is so prosperous in Stilwater society that it outsells all other narcotics including "Colombian" cocaine, effectively establishing a drug monopoly in the city.[reference?]

When the 3rd Street Saints are resurrected by Playa[7], they set out to steal the "Loa Dust Market" from the Sons of Samedi in an effort to destroy the gang and take its drug profits for themselves. In their first strike against the gang, Playa massacres a number of Samedi drug dealers working under Veteran Child at the Stilwater University, including Mark Gabby. At the time, The General has no idea who is responsible for the massacres, but since the event leads to a slight decline in Loa Dust profits for the day, he politely orders Veteran Child to investigate the matter.[8]

After Playa razes The General's drug farm[9] thanks to Shaundi's inside information, he orders Veteran Child to kill her, or risk having Mr. Sunshine burn him alive. Veteran Child fails and is killed by Playa following a gun fight at the On Track Nightclub[10].

After the Saints destroy most of his drug labs in Shivington[11], further ruining his profits, The General and Mr. Sunshine decide to confront and execute Playa by snatching him off the streets. Once inside The General's limo, Playa succumbs to the effects of Loa Dust present in the air, but still manages to kill two of The General's guards, let off two shots at Mr. Sunshine, and escape using the corpse of one of the guards to break his fall as he tumbles out onto the streets at high speed. After this, The General orders a massive assault on the Saints Hideout, but Playa, Pierce, and Shaundi manage to fight off all the encroaching Samedi despite Playa being insanely high at the time.[12]

After destroying or hijacking several more shipments of Loa Dust, The General cuts off one of Mr. Sunshine's ears and The General expresses the fact that he knows Mr. Sunshine can make things right and kill Playa[13]. Mr. Sunshine ultimately dies, leaving The General now with no lieutenants[14]. After this victory, the 3rd Street Saints prepare an ambush for The General in front of the Rounds Square Shopping Center after tracking the location of his Hounfor.[15] The General and his escort come under attack after the Saints slam a bus into the side of his limo, and flip it a full 360 degrees before slaughtering all his bodyguards.[16] The General escapes into the underground shopping mall in a mad rush, but Playa pursues him with Shaundi. The General finally confronts Playa with the rest of his men in his turret-mounted Bulldog, but after a long chase, Playa destroys the car, killing him in the process.[5] Playa then celebrates the long awaited demise of the Sons of Samedi by smoking one of The General's cigars.[17]

Veteran Child: "You want me to cut off some dude's hand?"
The General: "If he stole from me, he needs to learn."


— Veteran Child and The General after university dealers got killed by Playa.[4]


— The General and Veteran Child after the Sons of Samedi's farm got burned down by Playa.[18]

The General's a pussy, I used to steal his lunch money back in Junior High 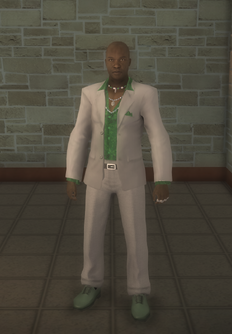 The General in Saints Row 2 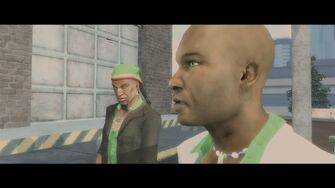 The General with Mr. Sunshine 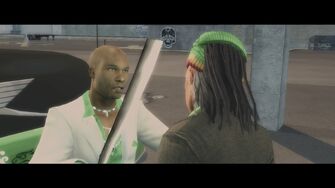 The General with Mr. Sunshine on the roof watching Shivington burn

The General smoking a cigar

The General holding some Cash 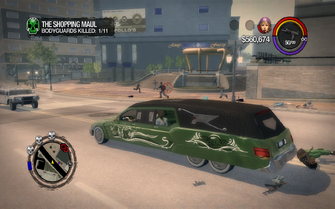 The Shopping Maul - The General still in Hounfor 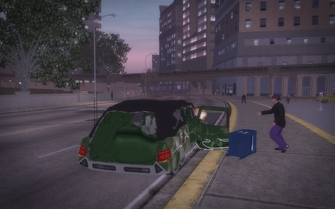 The Shopping Maul - The General still in Hounfor from rear 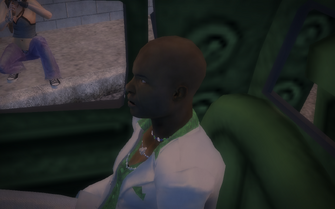 The Shopping Maul - The General still in Hounfor closeup from left 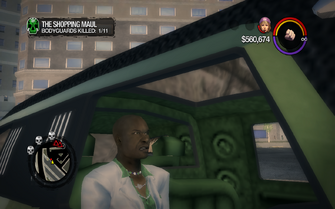 The Shopping Maul - The General still in Hounfor closeup from right

• List of Missions and Cutscenes to check
Retrieved from "https://saintsrow.fandom.com/wiki/The_General?oldid=422754"
Community content is available under CC-BY-SA unless otherwise noted.