The Gankster Pack[1] is a downloadable content pack for Saints Row.[2]

In September 2012, this and all other Saints Row DLC was removed from the Xbox Live Marketplace, but in July 2015 returned in store for $4.99.

The pack adds 2 new vehicles into the game which can be purchased at Foreign Power for $1 each.

Rumbler
A vintage hotrod-like coupe similar to a 1932 Ford Highboy,

Lefturner
A stock-car racer similar to the ones used at NASCAR.

Designed for co-op, Heist takes place in a bank. In this mode you and your ally have been caught in the act of robbing a bank. You must open the vault via three key locations, grab the cash, and escape... all while being attacked by the relentless Stilwater PD. 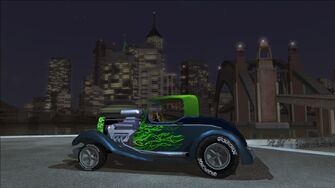 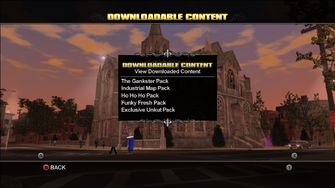 This article contains no references. See Help:Cite.
Retrieved from "https://saintsrow.fandom.com/wiki/The_Gankster_Pack?oldid=402383"
Community content is available under CC-BY-SA unless otherwise noted.