The Fight Before Christmas is the second mission in Saints Row IV: How the Saints Save Christmas.

It's the most wonderful time of the year and we must keep the holidays alive!

Future Shaundi informs Playa that Clawz has been manufacturing weapons instead of whatever items the kids normally asks for and that the elves resistance are going to fail unless they help them stop Clawz.

Playa, Future Shaundi and Santa arrive in the North Pole and head for the workshop. There are Snowmen set up around the North Pole mocking Christmas, much to Santa's displeasure, although Future Shaundi warns them that the Snowmen mocking Christmas is only the beginning. Upon getting to the courtyard outside the workshop, Santa finds his prized pine tree ablaze and the heads of his reindeer on pikes, much to his dispair. Playa warns Santa to stay back but refuses and declares he's taking back the North Pole, being backed up by Future Shaundi. Tinsel ,the leader of the Elf resistance, calls out to Santa and warns him about the fleet of mechanical reindeer that Clawz has been creating.

After clearing the courtyard, the trio finds the entrance locked, this prompts Playa to ask where the stables are. They find the Robo-reindeer Tinsel mentioned, much to Santa's and Future Shaundi's disgust. Future Shaudi, disgusted at the sight, attempts to curse. but restrains her bad language, much to Playa's surprise. Future Shaundi points out is due to Santa being with her, but Santa mentions that bad language doesn't bother him. After deactivating the Robo-reindeer, Twinkle arrives and declares how Clawz made him and other traitorous elves a deal to work for him and enlarged them to human size. After a brief chase, Twinkle and the trio arrive at the workshop's back entrance only to find it crawling with elves. Twinkle is eventually killed and Santa becomes upset with Twinkle's traitorous deeds and death. Future Shaundi assures Santa that everything will be fine, but Playa shows little emotion or care.

Playa and Santa gets into the workshop and finds Mrs. Claus and the elves fighting back against Clawz's Gingerbread men and Nutcrackers. Mrs. Claus assures Playa and Santa that The North Pole is safe, and surprises Playa that The North Pole was a weapon, in which Mrs. Claus confirms. Santa tells Playa that there might be a gift for them, in which they find a Christmastime Dubstep Gun, much to Playa's happiness. Clawz shows up and attack them, but he eventually gets repealed back, in which Playa points out that he may have jumped simulations.

After going back outside, Santa expressed sadness that the workshop is in shambles, but is assured by Mrs. Claus that it can be rebuilt, getting slight acknowledgement from Playa. As Playa and Santa get on the Sleigh and prepares to track down Clawz, Santa remembers that Future Shaundi is still in the workshop, so Mrs. Claus agrees to get her while Playa and Santa go to save Christmas. 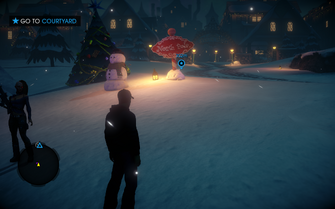 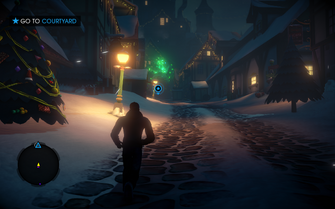 Playa running to the Courtyard 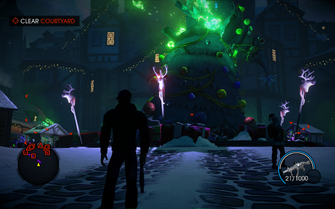 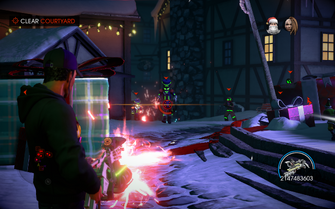 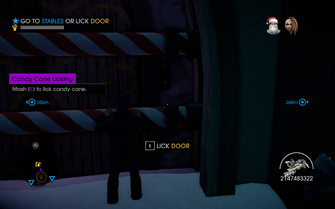 Playa licking the candy cane on the door 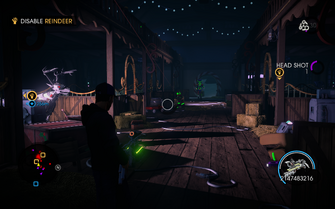 The Stables where the Robo-Reindears are stored 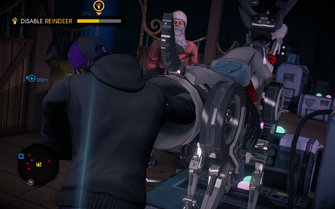 Playa disabling one of the Robo-Reindears 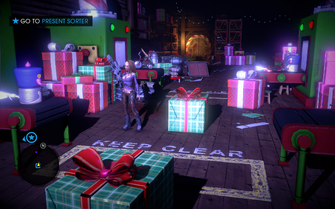 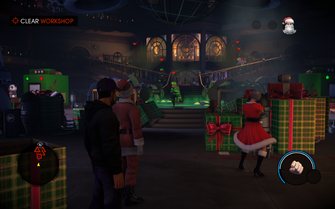 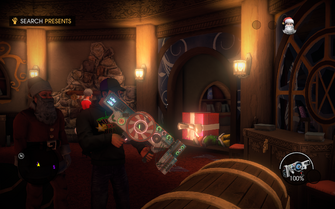 Playa gets a Christmas Dubstep Gun as a gift 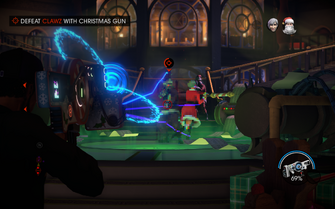 This article contains no references. See Help:Cite.
Retrieved from "https://saintsrow.fandom.com/wiki/The_Fight_Before_Christmas?oldid=426359"
Community content is available under CC-BY-SA unless otherwise noted.