"The Enemy of my Enemy" is the ninth and antepenultimate mission of the The Brotherhood story arc in Saints Row 2.

After Dane Vogel seized Maero's incoming weapons shipment[1], Playa is playing skee ball with Shaundi at an arcade. Following Playa's request[2], Shaundi's learned that Maero has been asking about the rescheduling of his shipment. Suspecting that there's a reason for the shipment's delay, Playa heads out to investigate.[3]

Sure enough, Playa locates the cargo ship to the southeast of Stilwater. After killing the Ultor security team on deck, Playa then uses the weapons that the shipment consists of to defend against incoming Brotherhood enemies, who have also arrived in an attempt to wrestle control of the shipment back from Ultor. After successfully holding off all waves of enemies, Playa calls Shaundi and asks her to get a crew together to transport all the weapons back to the Saints Hideout.[4]

A cargo ship carrying heavy weapons for Ultor's security forces was hijacked earlier by the Third Street Saints, and officials aren't releasing any details as to how exactly it happened. The Saints commandeered the vessel shortly before it was scheduled to arrive in port, forcing a massive contingency of Ultor forces to attempt to retake it. Unfortunately for Ultor, the armaments on board the ship proved more than capable of holding off an assault, and the Saints escaped with the weapons in tow. Ultor's Dane Vogel declined to comment for this story.

Find a way on board the cargo ship

To get to the cargo ship, grab a vehicle from one of three locations marked on the Map - a Miami at the Stoughton dock, a Horizon at the Hotel Penthouse helipad or an Oppressor in Wardill Airport.

Head to the vessel and board it - this may be difficult as some of the Ultor security guards on deck - particularly at the bow (front) of the ship - have RPG Launchers that can shoot down a helicopter.

There are 18 Ultor guards in total.

Once those on deck have been killed, the last 5 are highlighted in the hold, accessible through a door near the bow.

The Handle With Care mid-mission cutscene plays. Even if the last guard is taken as a Human Shield and led above deck, Playa spawns inside the hold after the cutscene.

The Brotherhood storm the cargo ship in three separate waves, and are delivered with Brotherhood Oppressors, Brotherhood Miamis, and normal Sharks.

Ammunition can be refilled at any time by visiting the ship's hold. After destroying each wave, the game provides time to revisit the room and resupply.

The waves themselves aren't particularly difficult, but the gang members board both sides and can be overwhelming. Head to the bow and, rather than trying to shoot the boats and helicopters on their way to the boat, shoot the helicopters with the RPG Launcher as they close in and attempt to drop enemies off nearby. Any surviving helicopters endlessly fly around the cargo ship in a pattern until destroyed. The boats pull up alongside the cargo ship and offload enemies too, but they can easily be gunned down. Furthermore, the boats are no longer a problem once their passengers have disembarked, unlike the helicopters.

Once all three waves of The Brotherhood's attack have been repelled, the mission ends. After the mission completion screen, an Oppressor helicopter spawns on deck.

Hey it's Shaundi, meet me at Adam's Arcade, I gotta talk to you about the Brotherhood.

"Of Shipments and Skee-Ball" cutscene

Playa: "Tell me you didn't pick this place just so you could play that stupid game."
Shaundi: "No, I picked this place so we could play this stupid game...this gang shit's got you a little stressed out, you need to relax."
Playa: "By playing skee-ball."
Shaundi: "Oh yeah."
Playa: "Ya know most people just smoke pot."
Shaundi: "Right...and then they go play skee-ball."
Playa: "Fuck it."
Playa: "So did you hit the docks like I asked?"
Shaundi: "Wait, what?"
Playa: "After the Feed Dogs concert, I called you to look into the docks and you sa-"
Shaundi: "Look, I gotta be honest I was really stoned..."
Playa: "You gotta be kiddin' me."
Shaundi: "Yeah I totally am. One of the dock workers just called and said this big guy with tattoos and a scarred face was shakin' people down trying to find out when some shipment was rescheduled to arrive."
Playa: "Why would Maero need to ask about the time of his own shipment?"
Shaundi: "I dunno, maybe it got delayed."
Playa: "And you're sure this big guy with tattoos is Maero, and not just some biker guy?"
Shaundi: "I'd bet my life on it."
Playa: "Deal."
Shaundi: "Wait... hold up, waddya mean deal?"


— "Of Shipments and Skee-Ball" cutscene

Playa answers a phone call
Playa: "What's up?"
Shaundi: "Are you ok?"
Playa: "I'm fine, what's up?"
Shaundi: "I was listening in on the police scanner and the coast guard is reporting a lotta Brotherhood are comin' towards you."
Playa: "You sure?"
An explosion knocks Playa to the floor, and several crates fall and burst open
Shaundi: "Boss? Are you there?"
Playa notices RPG Launchers inside the crates
Playa: "I'm fine Shaundi...suddenly I'm not so worried about the Brotherhood."


— On the phone to Shaundi 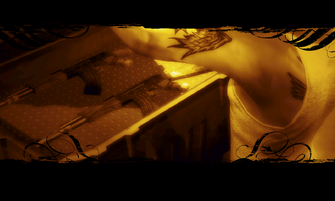 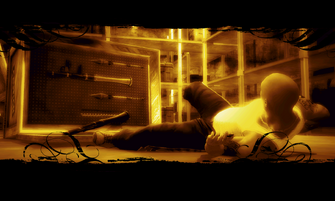 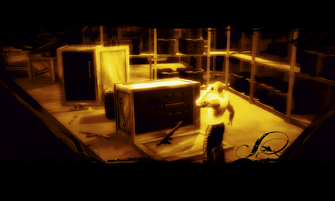 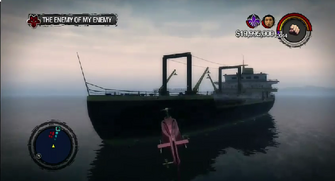 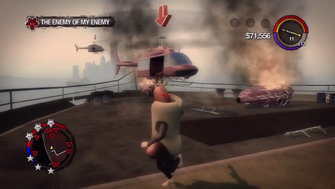 The Enemy of my Enemy - Oppressor hovering above the deck

This article contains no references. See Help:Cite.
Retrieved from "https://saintsrow.fandom.com/wiki/The_Enemy_of_my_Enemy?oldid=423657"
Community content is available under CC-BY-SA unless otherwise noted.