"Thank You and Goodnight!" is the sixth mission of the The Brotherhood story arc in Saints Row 2.

At the Saints Hideout with Shaundi and Pierce, Playa laments their failure to ask Jessica about the shipment before killing her.[1] Playa is sure Donnie won't know about it after displeasing Maero, and so decides to question Matt.[2]

Together with Pierce, Playa steals a Delivery Truck carrying fireworks and uses it to get past The Brotherhood and gain access to the Feed Dogs concert, where Matt is playing. Matt has little information to give and only knows that the shipment is coming in by boat. Playa, furious, mercilessly holds down Matt's hand as the pyrotechnics display activates, burning and crippling his hand and arm. As Playa leaves, they phone Shaundi and ask her to find out what she can on the shipment by "[making] new friends" at the docks.[3]

Doctors are not optimistic that the lead guitarist for the Feed Dogs will ever play again after a mis-used pyrotechnic seared his hand earlier today. After leading Brotherhood members on a wild chase through the city, witnesses say members of the Third Street Saints stormed the stage and assaulted the band before the leader scared everyone out of the area

Pick up the fireworks truck from the warehouse

Drive Pierce to a specific warehouse.

Kill the Brotherhood guarding the truck

Eliminate all of the The Brotherhood enemies outside.

Get into the Fireworks Truck

Hop into the Delivery Truck to hunt down Matt for information.

Throw fireworks boxes to defend the truck
Get to the Arena

While Pierce drives the truck to the concert, there are unlimited crates of Fireworks are supplied defend the truck from incoming enemies. If the Fireworks hit a vehicle, they instantly explode; otherwise, they have a fuse. Any vehicle caught inside the fireworks' explosion is instantly destroyed.

In Co-op, the mission plays slightly different: the guest drives the truck instead of Pierce and there is also a 3 minute countdown. There are also get 4 units of Brotherhood Notoriety instead of 3 while in a truck.

Let's see what this bad boy can do...

— Pierce, once in the truck


— While driving to the warehouse

— While driving to the concert


— While driving to the concert

The concert's started, get in there!

"And the Band Played On" cutsceneEdit

Playa: "Back off."
Playa: "What's the shipment?"
Matt: "The fuck are you talking about?"
Playa: "Don't fuck with me, Matt, you got a lotta gear on this stage I haven't played with yet..."
Matt: "You gotta believe me, I just tattoo the gang, they don't fill me in on what they're doing."
Playa: "All that time you inked up Maero and you never heard him talk about a shipment with Jessica?"
Matt: "All I heard is that it was coming in by boat...they leave me out of the loop on purpose, they were trying to keep me from getting mixed up in their shit."
Playa: "Your friends should have tried harder."
Matt: "Come on, I told you everything I know!"
Playa: "Don't worry, I'm not gonna kill you..."
Matt: "*screams*"
Playa: "Enjoy your retirement, Matt..."
Playa calls Shaundi
Playa: "Hey, Shaundi?"
Shaundi: "'Sup?"
Playa: "You know anyone that works at the docks?"
Shaundi: "Not really..."
Playa: "Looks like you get to make some new friends...Maero's got a shipment comin' in by boat and I wanna get it before he does."
Shaundi: "OK, I'll take care of it."


— "And the Band Played On" cutscene 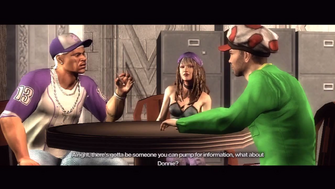 Pierce, Shaundi, and Playa discuss their next move at the Saints Hideout 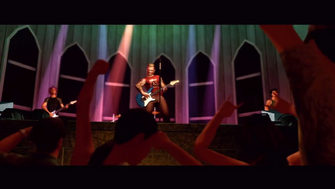 Matt and the Feed Dogs perform on stage 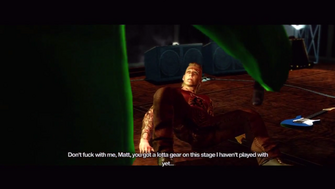 Matt is held at gunpoint by Playa, who demands to know everything about the shipment 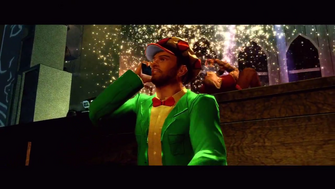 After Matt tells him the shipment will arrive by boat, Playa uses the stage's pyrotechnics to cripple his arm 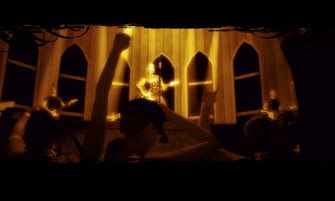 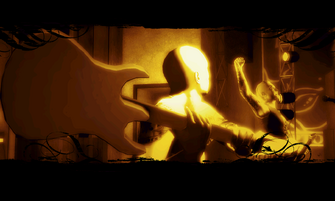 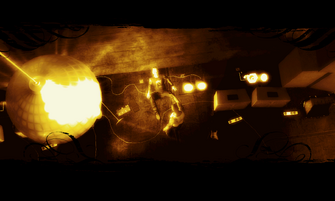 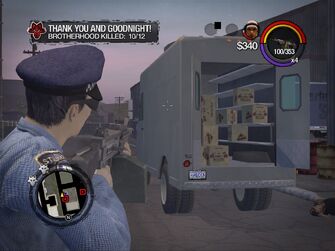 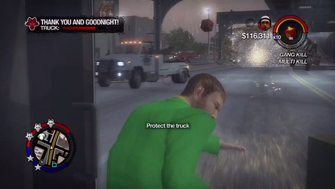 Thank You and Goodnight! - Protect the truck objective

This article contains no references. See Help:Cite.
Retrieved from "https://saintsrow.fandom.com/wiki/Thank_You_and_Goodnight!?oldid=425041"
Community content is available under CC-BY-SA unless otherwise noted.