Temporary Weapons are over-sized weapons which cannot be added to the Weapons Cache in Saints Row: The Third and Saints Row IV.

This weapon has a limited number of uses and cannot be carried like regular weapons. It must be dropped to enter vehicles.

In the game these large weapons cannot be stored in the radial weapon inventory or Weapons Cache. These weapons are wielded by Specialists and Brutes, and are dropped upon death, when they can be picked up by The Protagonist.

Temporary Weapons are formally introduced in the "Hit the Powder Room" Stronghold, which features a Brute wielding a Mini-Gun, who must be killed to progress. The Mini-Gun is dropped by the Brute upon death, and can be picked up.

The Mini-Gun returns from Saints Row 2 and is still a force to be reckoned with. This version doesn't require a great deal of time to charge up before firing, and can be completely reloaded in less than two seconds. The Mini-Gun is used by Brutes, but it is only dropped upon their death.

The Incinerator is an over-sized variant of the Flamethrower from Saints Row 2, but in comparison to its predecessor, it doesn't require reloading, won't overheat, and has a greater range of fire. Like the Mini-Gun, the Incinerator is used by Brutes, but is dropped only upon death.

The GL G20 is an automatic grenade launcher designed to launch numerous grenades in quick succession. The grenades it shoots take a few seconds to detonate, but when they do, the devastation is pretty spectacular, capable of destroying vehicles and obliterating enemy gangsters with relative ease. The GL G20 is used only by Luchadores specialists, who appear at level 3 Luchadores Notoriety and higher.

The Shock Hammer is a large melee weapon designed to strike the ground, and send out electrical shockwaves which knock nearby bystanders off their feet. It is also the only temporary weapon to feature a secondary attack, in which The Protagonist violently swings the hammer from side to side, knocking down and killing most enemies in one or two strikes. The Shock Hammer comes with a limit of 10 uses (primary attack only), and is used only by Deckers specialists who come after The Protagonist at level 3 Deckers Notoriety and higher.

The Riot Shield is capable of blocking most types of enemy fire, making it especially useful in firefights that involve a great deal of shooting. When hiding behind one, the only available weapons are pistols or SMGs. The Riot Shield can also function as a melee weapon, with a single swing capable of killing almost anything short of a specialist or brute. Another pro is that it doesn't have a limit placed on its number of uses, making it the only temporary weapon that can be used indefinitely.

The Riot Shield is used by the law enforcement:

During the mission "Murderbrawl XXXI", 5 unique Temporary Weapons are available. These have very limited uses and break after few attacks, similar to Improvised Weapons used in Fight Club.

The game data files indicate that a "Toilet" was also defined as a Temporary Melee Weapon, but is not used in this mission.

The ZinTek Force Shield is used by Zin and is used to cover most of the attacks, similar to Riot Shield. Unlike Minigun Arm or Minethrower Arm, The Protagonist loses the Shield when Super Sprinting.[2]

The Lasergun Arm is used by Murderbots as Temporary-classed weapon. It is first introduced in the mission "All Hands on Deck" as Special-class weapon. Shaundi's "Payback" Side Quest unlocks the Minigun Arm, which can be later equipped at Weapons Cache.

The Mech Suit is unique Temporary Weapon. It is first introduced in the mission "Matt's Back", where it's referred by Kinzie Kensington as "Power Armour". There are also 2 instances of Mech Suit Mayhem, where the Mech Suit is used to cause mayhem on the streets of Virtual Steelport. After completing "Grand Finale Part Four", the Mech Suit delivery is unlocked in the Cellphone. After calling the delivery, it is possible to use melee attacks, or miniguns with rockets. There are several Upgrades, which allow to spend more time in the Mech Suit, let to recharge Mech Suit's weapons more faster and to increase the amount of fuel to be able to fly for longer time. 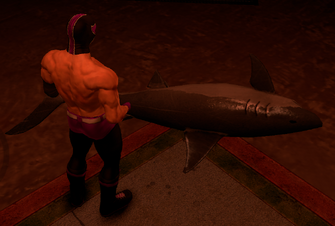 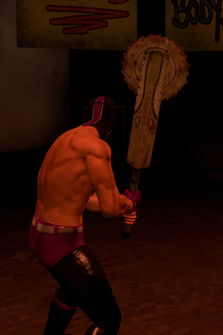 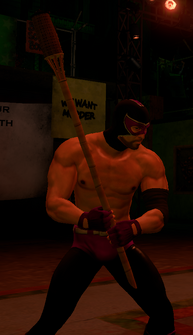 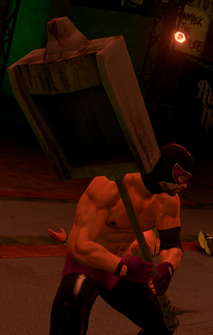 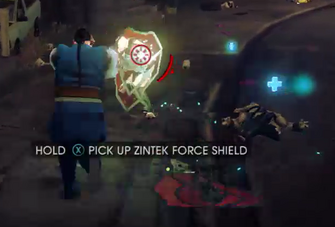 • Can Homies use Temporary Weapons?
Retrieved from "https://saintsrow.fandom.com/wiki/Temporary_Weapons?oldid=416721"
Community content is available under CC-BY-SA unless otherwise noted.