This is a talk page, used for discussing improvements to the F-69 VTOL article.

The name of this vehicle is unconfirmed. A citation was added to replace the fact tag next to the name, but neither the linked page, nor the video on the linked page confirm the name.
The fact that this vehicle is in SRTT is not in dispute, the fact that VTOL is an acronym is not in dispute and is already listed in the trivia section. -452 02:14, September 11, 2011 (UTC)

Yeah, the name "STAG VTOL" is in fact incorrect, according to the recently added image in the gallery the garage calls it the "F-69 VTOL" and this name is also diplayed upon entering the vehicle JBanton 18:26, October 14, 2011 (UTC)

Just saw the vid on IGN (God I hate their website and Flash player) so I've added it as a citation and renamed the article too. I'll most likely redirect/add a new citation when IGN upload it to YouTube. Looks like Jane Valderama is back too. – Moozipan Cheese(talk page) 18:32, October 14, 2011 (UTC)

I'm looking at the STAG page and I see something called a 'Condor VTOL'. Is this a completely different vehicle, or is it the real name of the VTOL? I'm confused. :c Trollyfaec 14:11, November 15, 2011 (UTC)

There has been a comparison in the trivia which has been changed back and forth between the SR-71 Blackbird and the ""Blackbird" X-Jet from the X-Men franchise.
The comparison has been removed from the article pending further discussion.
The F-69 definitely does not resemble the SR 71 Blackbird.
I do not think that the F-69 VTOL overly resembles the Blackbird X-Jet, the only thing that makes it resemble it is the forward swept wings. The Sukhoi Su-47 is a much closer visual match. --452 07:43, January 13, 2012 (UTC)

The forward swept wings, the size of those wings, approximate proportions of the wings and fuselage, etc. It's far closer to the X-Jet in overall proportions than it is to the Su-47, which has a much longer and more slender fuselage compared to the two. Evil Tim 07:59, January 13, 2012 (UTC)

The wings are a different shape, the X-Jet does not have the forward smaller wings, and the proportions do not look similar: http://marvel.wikia.com/X-Men_Blackbird/Gallery --452 08:31, January 13, 2012 (UTC)

I'm specifically talking about this one (if you're not familiar, that's the version used in the cartoon series), not the others. Also just a technical note, the "small forward wings" are called canards. Evil Tim 10:50, January 13, 2012 (UTC)

I've found an X-men image which looks more like the F-69 VTOL than the one you previously linked. Although, the proportions are a little off, and the wings are wrong. In this one:

I imagine the cockpit proportion is just a result of them making the plane as small as they could get away with so it's easier to handle in built-up areas; if you compare it to any real fighter jet the cockpit is hugely oversized, it's actually proportioned more like a GI Joe toy. Yeah, the X-jet is much larger, it's supposed to have something like a 4-man cockpit in most versions I've seen. Evil Tim 09:38, January 16, 2012 (UTC)

Explaining and linking to sources of names is standard. Please do not remove the wikipedia link again. Not everyone knows what VTOL stands for. --452 08:31, January 13, 2012 (UTC)

If you've had the term "VTOL" explained I don't really see how you could not realise it's a real-life concept. Not meaning to be sarcastic, but are there really people who know how to turn on a computer but don't know what a helicopter is? At most I think you could pothole link "VTOL" to the Wikipedia article, I don't see how more is necessary. Evil Tim 16:37, January 14, 2012 (UTC)

Since the intro quote is from a developer, it would be easy for a person who has never heard the term before to think that the developer made it up. Another example would be SWAT and STAG, both similar acronyms for law enforcement, one is real, the other created for the game. If someone hadn't heard of SWAT before, they may think they were either both real, or both fictional.
I knew what a helicopter was before I knew what a VTOL was, and I know I didn't know what VTOL stood for until I was 22. You appear to have much greater knowledge of aircraft than I do, so it's probable that you knew everything about them much sooner.
If there's a related wikipedia article that can be linked, especially in regard to the source of the name of a subject, it's put into the trivia section. Some, but not many, of the vehicle articles contain links to wikipedia articles even if the name of the vehicle is a really common word, they should all contain a link, even "Ant" and "Shark" - it doesn't matter if something is commonly known. If it can be explained and linked, it should be. --452 22:00, January 14, 2012 (UTC)

I think the best way would be just to pothole "VTOL" in the dev quote to wikipedia's article; just hovering over that and seeing where the link goes would probably be enough to show the reader it's a real thing. Evil Tim 09:39, January 16, 2012 (UTC)
Added the pothole, also added one to "microwave laser" since Masers are real too. Evil Tim 06:34, January 22, 2012 (UTC)

Masers, as their name implies output microwave radiation, they are not yellow/orange light waves, they are microwaves without any color. Besides they don't output a collimated beam in the way lasers do because unlike lasers they don't have that Fabry-Perot optical resonator mirrors. The "Microwave Laser" in the game is just a fancy name without any scientific meaning and no basis in reality. (Unsigned: Special:Contributions/122.61.169.71 122.61.169.71 04:31, November 18, 2012 (UTC))

I had originally posted both a section and some images about what I believed to be a unique version of the F-69 VTOL seen in the mission "My Name is Cyrus Temple", but Evil Tim removed everything on the basis that this was just a regular variant with blue lights. Personally, I think he's wrong because if you look at the images more closely, the underside of this VTOL is also colored blue, its not just the lights. The regular F-69 VTOL has a black and white underside, not a blue one. Anyone else see my side of the story here? 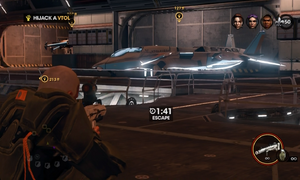 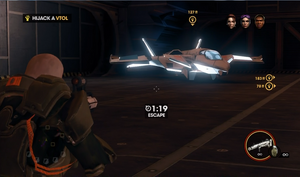 As you can see in this image from the garage:

That would probably require checking the game files to prove (ie seeing if it's a standard F-69 model spawned or something else). Evil Tim 10:13, February 10, 2012 (UTC)

As I've now played the game, I'm able to give a more direct opinion on this.
I'm still of the opinion that the parked F-69s simply look blue due to the lighting in the area.
I've seen the F-69 I've been flying look slightly blue under certain lighting conditions. In the open sky in the middle of the day, it's possible to make light reflect and appear blue. There is no "Blue F-69 variant". Apart from the obvious ones, the only other variant of the F-69 is the "flyby" variant, used in Gang Bang - they aren't blue either. -452 01:43, September 13, 2012 (UTC)

This "blue F-69 VTOL" matter reminds me very strongly of "The dress" debacle, in which people without the brainpower to comprehend that things can look different colours in different lighting conditions said a lot of very stupid things.
Many people swore that "the dress" was gold and white because it looked gold and white, due to the colours being washed out.
Just because something looks a certain colour does not mean it is a certain colour.
If I shine a green light on my white cat, it does not make it a green cat. -452 00:11, August 11, 2017 (UTC)

Retrieved from "https://saintsrow.fandom.com/wiki/Talk:F-69_VTOL?oldid=343846"
Community content is available under CC-BY-SA unless otherwise noted.