The TEK Z-10 is a submachine gun featured in Saints Row: The Third. It is the first SMG acquired in the game, and is the most common by far, seeing use by virtually every gang in Steelport, as well as by SWAT and the National Guard. It is gained automatically in the game's introductory sequence. Unlike the built-for-speed D4TH Blossom, the TEK Z-10 is a workhorse SMG, intended for a much more balanced application of firepower. As is the case for all SMGs, it can be dual wielded.

The TEK Z-10 does relatively little damage, lower than the D4TH Blossom and a lot less DPS. This is offset mostly by it firing slower. The slower fire rate makes it a bit more accurate by default, making it a little more stable at the cost of making it less-effective at suppressive fire than its counterpart. It still fires very quickly, and it can still go through a lot of ammunition if misused, especially when dual-wielded.

Upgrades make the TEK Z-10 much more effective - first improving its magazine capacity and accuracy, followed by improving its firepower and recoil. The last upgrade improves its hip-firing accuracy and gives it Incendiary rounds, allowing it to light things on fire while shooting. At level 4, the TEK Z-10 can blow up cars quickly and easily and, like the level 4 Grave Digger, is very effective against specialists since they'll panic like anybody else on fire. 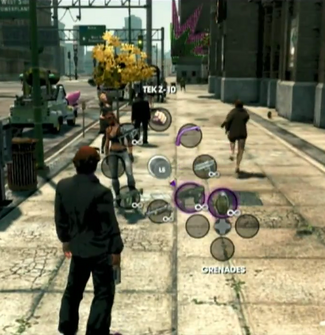 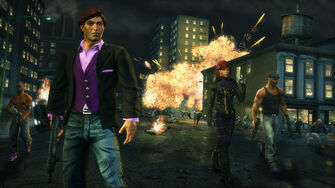 Promotional image of Saints Row: The Third. 2 versions of Playa are both wielding TEK Z-10s 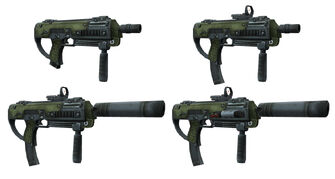 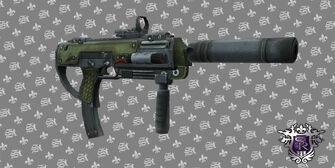 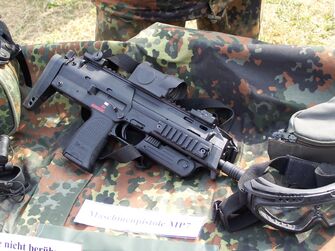 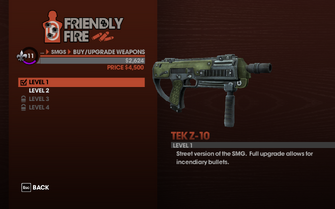 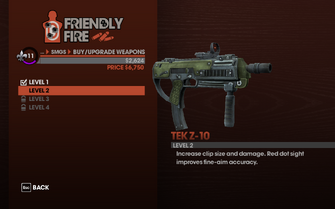 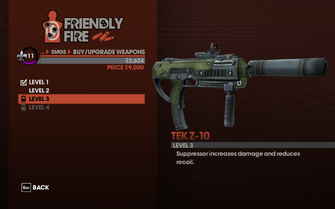 This article contains no references. See Help:Cite.
Retrieved from "https://saintsrow.fandom.com/wiki/TEK_Z-10?oldid=426609"
Community content is available under CC-BY-SA unless otherwise noted.