The TAC SMG is a weapon in Saints Row IV.

A quick and efficient infiltration weapon.

The TAC SMG uses the same model as a Heavy SMG and is used only during "The Case of Mr. X" as a primary weapon. It is never unlocked in the game and the only way to obtain it outside the mission is to modify the game files.

When summoned outside the mission, it has 50 rounds per magazine and cannot be upgraded. It is impossible to dual wield it even with an upgrade.

This variant is used during the first part of "The Case of Mr. X". If a Primary Attack button is pressed, only 1 round is fired.

Outside of the mission, Playa holds it similar to a Semi-Auto Shotgun.

This variant is similar to the SMG-StormM11 but a normal holding animation is used. It is also possible to fire rounds as long as a Primary Attack button is held. 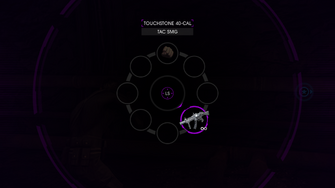 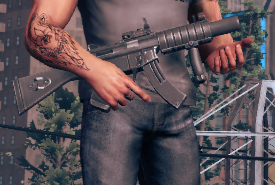 This article contains no references. See Help:Cite.
Retrieved from "https://saintsrow.fandom.com/wiki/TAC_SMG?oldid=421615"
Community content is available under CC-BY-SA unless otherwise noted.