"Suburbs Strip Club" is a Stronghold in Saints Row 2.

Pierce phones Playa and briefs them on The Ronin, who are disregarding the rules during a bachelor party at the Technically Legal strip club. Playa is sent to "teach those assholes a lesson".

A bachelor party took a violent turn as the Third Street Saints laid siege to a local strip club. Blood and pasties flew through the air, as gun fire tore through stripper and Ronin alike.

Enter the strip club and kill the Ronin Lieutenants

Head inside the strip club and kill all of The Ronin enjoying the party. Just past the double doors is an enemy with a Stun Gun.

Head up the stairs to the next floor and kill all of The Ronin in their private rooms alongside some strippers.

Go to the roof and kill the reinforcements
HUD: Ronin Killed X/13

After they're all dead, a few Ronin reinforcements arrive outside the club; head upstairs again to exit out onto the roof and kill them all. If no fall damage from the Base Jumping Diversion has been unlocked, it's possible to jump off the roof and attack them on the ground.

It is not necessary to go upstairs for this objective, although there are 3 Ronin members wielding Samurai Swords inside.

One of my girls at Technically Legal called me up and said that a Ronin bachelor party was getting too touchy feely. The bouncers have all been paid not to do dick, so if anyone is gonna teach those assholes a lesson it's gonna have to be you. 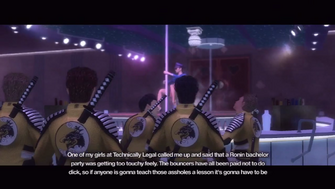 The strip club where the Stronghold takes place 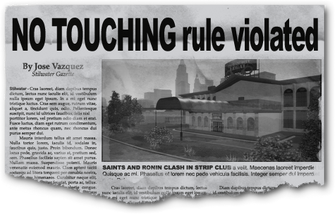 Retrieved from "https://saintsrow.fandom.com/wiki/Suburbs_Strip_Club?oldid=425205"
Community content is available under CC-BY-SA unless otherwise noted.