"Stuffing the Ballot" is the antepenultimate mission in Saints Row.

There's a mayoral campaign going on, and I want one of the candidates taken off the ballot. Marshall Winslow is in his campaign bus right now, and he has an appointment with the northbound. Park that bus on the train tracks tonight, or you'll find Julius' body floating in the river tomorrow. Don't disappoint me. Julius is counting on you.

— Chief Monroe to The Protagonist, in a phone call.

With Stilwater under control of the 3rd Street Saints, it would seem like their troubles are over, but not long after The Protagonist is promoted to second-in-command of the gang by Julius Little,[1] Chief Monroe calls them up outside the church. Monroe is not happy with "that stunt [The Protagonist] pulled downtown", referring to "Round Peg, Square Hole", and has arrested Julius Little. The corrupt Chief of Police threatens The Protagonist into helping him and his associate Richard Hughes, saying that otherwise he'll kill Julius. The Protagonist's first task is to murder Stilwater's current mayor, who is Hughes' mayoral opponent in the upcoming election: Marshall Winslow.

After hijacking the bus, The Protagonist parks the vehicle on the train tracks and flees before an oncoming train smashes into it, instantly killing the earnest mayor.

Police Chief Monroe called to tell you that the only way you can get Julius back is to do a little favor. Agreeing, you hijacked mayoral candidate Marshal[sic] Winslow's campaign bus and parked it on some train tracks, Winslow included. You hope Monroe will keep his word...

After watching the "Battlefield Promotion" cutscene, the player can begin this mission. In the first of three missions that compose the epilogue, The Protagonist must hijack Winslow's Campaign Bus and park it on the train tracks before the train arrives, all within less than four minutes.

This mission begins with a phone call from Chief Monroe, the first objective is not given until after the call finishes, but the GPS route is immediately marked on the map. Don't wait for Monroe to finish talking; immediately get in a nearby car and follow the GPS.

Once Monroe finishes talking, there is 3 minutes and 45 seconds to complete the mission.

The Winslow Bus HUD is displayed when approaching the bus. Before the HUD is displayed, the bus does not move, and is sitting still in Chinatown. Upon reaching it via the GPS route, it drives from left to right directly in front. Driving at full speed in an Attrazione, it is possible for the Bus Health HUD to appear before the timer.

The bus is being escorted by two Five-Os and two FBIs, and the occupants inside the vehicles are carrying heavy firepower. If Notoriety has been earned while driving here, they are immediately hostile, but with Notoriety they ignore The Protagonist.

It is not possible to enter the bus until the bus health gets low, or the driver is killed. The fastest way to disable the bus is to park in front of the convoy, exit the vehicle, wait for the bus to stop and shoot the bus driver.

If the police are already hostile, it is still possible to kill the driver, albeit more difficult. The most reliable way to quickly stop the bus is to get ahead of it, get out and shoot it with an RPG Launcher or Platinum RPG.

The door to the bus is on the right of the vehicle, entering the bus completes this objective.

The hardest part of the mission is now over, so simply drive the bus to the train tracks a few neighborhoods over in Cecil Park and exit the vehicle, allowing the train to finish Winslow off. The bus controls quite well, and is invincible during the mission.

Although the two FBI vehicles continue following, there is a cap of two units of Notoriety during this mission.

Get out of the bus before the train arrives.

After parking the bus on the tracks, exit the bus and sprint away from the vehicle; the train arrives shortly and decimates the bus, completing the mission.

The mission can be failed by getting smoked or busted, failing to reach the tracks before the train arrives.[2], or destroying Winslow's bus,[3]

As the bus is invulnerable, the only way to destroy it is to drive it into the water.

Jack Armstrong: "This just in to the newsroom, a train wreck in Stilwater apparently claims the life of a mayoral candidate. With a report, we go to Jane Valderamma on the scene."
Jane Valderamma: "Chaos at the 8th Street underpass, Jack, as the campaign bus of mayoral candidate Marshall Winslow has been destroyed by a northbound train. I'm looking at the scene from the bridge above the intersection. From what I've been able to gather from railroad officials and from potential eye witnesses, no one knows exactly why the bus simply stopped on the tracks just as the train rounded the bend. There was some word that a man was seen walking quickly away from the vicinity of the bus, but that man has not been identified or located. Police tell me that the impact was heard four blocks away and the train literally cut the bus into two pieces. All those aboard the bus are dead, including Marshall Winslow. Jack."
Jack Armstrong: "Jane, do the police have any leads or suspects? Can they tell if the bus had been tampered with?"
Jane Valderamma: "It's still too early to tell, and there has been no official word on that, but one thing everyone here is agreeing on is that this is a tragedy and the city has lost a great man in Marshall Winslow. Reporting live from the 8th Street underpass, this is Jane Valderamma. Back to you, Jack."
Jack Armstrong: "Thank you, Jane. We will stay on top of this developing story and we will bring you updates as this tragedy throws the Stilwater mayoral election into disarray. I'm Jack Armstrong."

This is Chief Monroe. If you want Julius back, listen to what I've got to say. Now, that stunt you pulled downtown with the rocket launcher cost my associates and I quite a bit of money. Now, I may not be an honest man, but I'm a fair one. So rather than turn Saint's Row into a parking lot, I'm going to let you work off what you owe me. There's a mayoral campaign going on, and I want one of the candidates taken off the ballot. Marshall Winslow is in his campaign bus right now, and he has an appointment with the northbound. Park that bus on the train tracks tonight, or you'll find Julius' body floating in the river tomorrow. Don't disappoint me. Julius is counting on you.

Who the hell are you?

— Marshall Winslow, after The Protagonist hijacks his bus

I think there's been a mistake...

Why are you doin' this? I'm from Saint's Row myself...

— Marshall Winslow, after The Protagonist parks the train on the train tracks 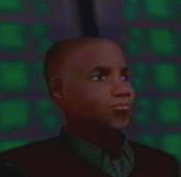 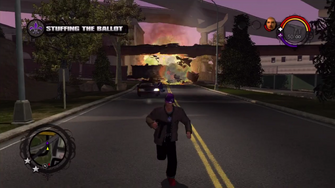 The bus explodes as the train slams into it, killing Winslow 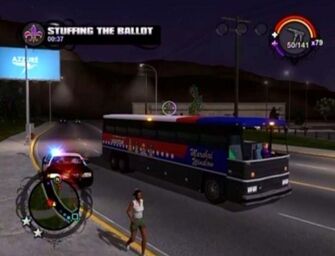 Winslow Bus during Stuffing the Ballot

This article contains no references. See Help:Cite.
Retrieved from "https://saintsrow.fandom.com/wiki/Stuffing_the_Ballot?oldid=406276"
Community content is available under CC-BY-SA unless otherwise noted.