"Stoughton Shipyard" is a Stronghold in Saints Row.

The Carnales got in another big shipment. There's too much product for us to take, so go to the docks and make sure they can't move any of it.

Julius Little phones The Protagonist and briefs them on a destroying a new shipment of drugs the Carnales recently received.

In the wake of the loss of their production plant, the Carnales ordered a large shippment[sic] from Columbia[sic] . Unfortunately for them, the Saints caught wind of their plan and sent you to destroy the product. By hopping into a bulldozer you were able to push millions of dollars in drugs into the water, further hurting the Carnales' income.

Get in the bulldozer

Push the Carnales drug shipments into the water

6 crates of drugs must be pushed into the water in 45 seconds. Pushing each crate into the water grants more time, leaving ample time to complete the Stronghold.

Challenges include following the crates into the water if the brake is not applied hard or fast enough, running out of time, and a Carnales gang member wielding an RPG Launcher near the final crate; it is best to shoot them from the bulldozer quickly after they have taken the first shot, although running them over can also work well. 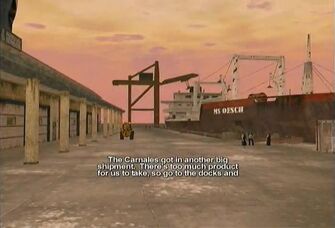 The shipyard where the Stronghold takes place 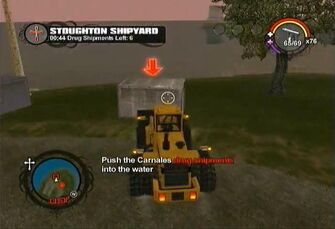 Gameplay from the Stronghold

This article contains no references. See Help:Cite.
Retrieved from "https://saintsrow.fandom.com/wiki/Stoughton_Shipyard?oldid=328741"
Community content is available under CC-BY-SA unless otherwise noted.