The stores are located in every district and generally match the economic status of each District. All stores are available at the start of the game. Unknown stores are marked with a green diamond with a question mark on it. There are some stores in the game that are mentioned on the radio and advertised but are not usable.

In Saints Row 2, Stores are available for purchase after gaining control of each neighborhood. Owning a store increases City Income and gives 10% discount, with 20% for owning a chain of stores.

In Saints Row: Third and Saints Row IV, Store Ownership is part of City Takeover, and is done in order to take over territories of a neighborhood. Same as in Saints Row 2, owning a store increases City Income and gives a discount.

In addition to discounts for owning stores, sometimes a certain chain of stores may offer a temporary discount. This may be announced at one of the Radio Stations.

A full list of clothing and prices is available in the Customization Items article.

There are various Fast Food stores through-out Stilwater, which sell Food and drink items. The inventory holds a maximum of 4 items, which can be consumed at any time to restore Health.

The only available Fast Food outlet in Saints Row is Freckle Bitch's, while in Saints Row 2 there are new establishments such as Charred Hard Burgers, Company of Gyros, Apollo's and Phuc Mi Phuc Yue. There are no Fast Food stores in Saints Row: The Third and Saints Row IV.

These do not sell food, only drugs and alcohol.

Stores marked on the map as "Night Club" have a usable Liquor Store at the bar.

Strip Clubs do not have a usable bar, and do not appear on the map.

Complete list of weapons in all Saints Row games.

Used to replay missions and cutscenes.

The only store in New Hades is Sinterpol Armory which sells weapons.

There are a total of 10 locations: 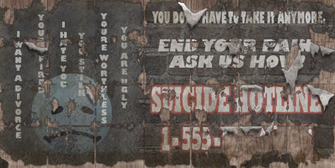 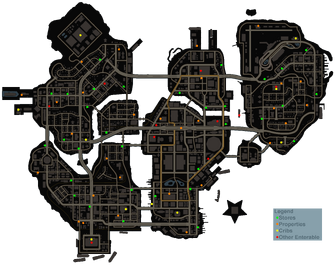 Steelport store locations are marked on this map in green 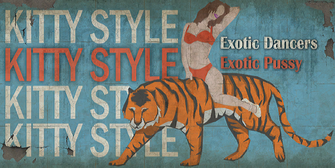 This article contains no references. See Help:Cite.
Retrieved from "https://saintsrow.fandom.com/wiki/Stores?oldid=423227"
Community content is available under CC-BY-SA unless otherwise noted.