"Stilwater Caverns" is a Stronghold in Saints Row 2.

Johnny Gat phones Playa and briefs them on the surviving homeless bums that survived the events of "Down Payment"; they have set up in the Stilwater Caverns and are mugging tourists to gather enough cash to fight back against the 3rd Street Saints, and suggests Playa clears them out.

Tourists to Stilwater's underground caverns received a shock today as dozens of homeless flooded into tourist areas and past confused citizens. Caverns authorities believe the homeless had been living somewhere deeper within the facility when people—mostly[sic] likely teenagers—attacked the make-shift shanty town and forced its residents to find safety.

Go to the homeless area and destroy the shanties

This introductory Stronghold requires heading into the bums' current hideout inside the Stilwater Caverns to destroy six marked shanties.

Unlike "Down Payment", throwing Human Shields into the shanties is not required to destroy them - simply shooting them works.

The bums themselves are lightly armed and put up little resistance, but there are a large number of them after first reaching the open area where the shanties lie, some armed with Molotov Cocktails. There are many explosive barrels lying around the edges of this area.

Those bums we evicted set up shop in the underground caverns. Now normally I wouldn't give a shit, but these assholes been muggin' tourists so they can have enough bank to come at us. You toss their shanty town, and I doubt they'll try to step... 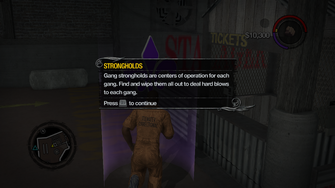 The caverns where the Stronghold takes place

The caverns where the Stronghold takes place

This article contains no references. See Help:Cite.
Retrieved from "https://saintsrow.fandom.com/wiki/Stilwater_Caverns_(Stronghold)?oldid=425256"
Community content is available under CC-BY-SA unless otherwise noted.