"Steelport Here I Am" is the fourth mission in Saints Row: The Third.

Listen, how about you and me roll around the city and see what Steelport has to offer?

— Pierce to Playa, over the phone at the beginning of the mission.

Pierce suggests to Playa that they need to show Steelport that the Saints are there to take over. The two briefly reminisce on Johnny Gat and, after improving their vehicle at a local Rim Jobs, they head to a nearby Planet Saints in order to purchase new clothing. Here, the Morningstar interfere, and the duo contend with their first Brute. After killing the Brute, Playa and Pierce head back to Shaundi's Loft.

Get in a car

Get in any vehicle. Pierce provides a Neuron, but entering any vehicle fulfils the objective.

Drive to the Mechanic

Drive to the marked Rim Jobs mechanic. Using another location does not fulfil this objective.

Upon arriving, the destination marker moves inside the Rim Jobs garage door. If the vehicle is exited before entering the second marker, the "Get in a car" objective is shown again, but re-entering the same car does not fulfil the objective, and a new car must be used.

Purchasing at least one Vehicle Customization for any customizable vehicle fulfils the objective.

If the vehicle is exited at this point, the objective remains the same.

If Playa has less than $50 cash, $50 is added automatically upon reaching the store, which is the cost of new paint.

If the Garage is full, Vehicle Customization is not possible. However, all Garages are inaccessible during missions and the Garage option in the Rim Jobs menu is not present during this mission, so it is impossible to delete a vehicle from the Garage, making it impossible to complete the mission without first exiting it and deleting a vehicle.

Head to the marked Planet Saints clothing store. Using another location does not fulfil this objective.

Upon arriving, the destination marker moves inside the Store. Entering the marked Planet Saints automatically opens the store dialog.

Buy at least one item of clothing.

If Playa has less than $50 cash, $50 is added automatically upon reaching the store.

If the store dialog is exited without buying anything, this objective remains active, and Pierce does not follow Playa.

After completing the transaction, a small faction of Morningstar show up alongside an unarmed Brute.

After the initial Morningstar are gone, no reinforcements arrive unless Morningstar Notoriety is raised.

At this early point in the game, using the 45 Shepherd or AS3 Ultimax is the best way to inflict damage. Once the Brute is close to death, there is an on-screen prompt to perform a finishing move, but this is optional.

Pierce immediately starts attacking, so the Brute targets him.

Attacking anyone, or firing a weapon, inside the store also results in level 3 Police Notoriety, so the Steelport Police will also attack the Morningstar and the Brute, further diverting the attention of the Brute.

The Brute's health and easily be reduced to critical between Pierce, the police, and friendly fire from the Morningstar. They all ignore the Brute when the finishing move prompt is present, but using the Brute as a makeshift human shield can force the enemies to shoot at him and kill him without needing to trigger the finishing move.

Checkpoint
Return to the safe house

Get inside a vehicle and drive back to Shaundi's Loft with Pierce.

Morningstar Notoriety is set to level 2, so Morningstar reinforcements arrive and pursue.

Upon arriving, the destination marker moves inside the Crib, and a Tutorial message is displayed about hiding inside owned buildings to clear Notoriety.

The mission can be failed by getting Smoked, abandoning Pierce, or Pierce dying.

Pierce is bulletproof through-out the mission, by can be killed if he is inside a vehicle when it explodes.

Jane Valderamma: "For those who work in retail, life can be full of monotonous sales and customers that make one wish torture was legal. However, for a few employees of Planet Saints, life recently became well worth the pain: the leader of the Saints and Japanese commercial superstar Pierce Washington stopped by to do a little shopping. Though no autographs were signed for the hard workers at the store, shoppers were treated to a show of skill when an enraged man attacked the Saints after they exited the store. The ensuing fight showed bystanders that the Saints had not gone soft as international celebrities. This is Jane Valderamma with your Steelport Celebrity News."

This car could use a little tuning. Let's find a Rim Jobs and get it cleaned up.

— On the drive to Rim Jobs

— On the drive to Planet Saints

Let's find a Rim Jobs. If we're gonna jack a car, we should at least change the paint or somethin'.

Dammit, we just fixed that thing up... 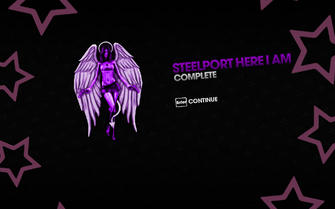 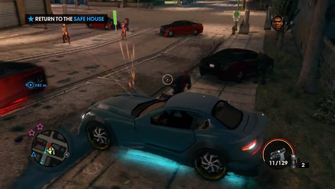 Return to the Safe House objective

This article contains no references. See Help:Cite.
Retrieved from "https://saintsrow.fandom.com/wiki/Steelport_Here_I_Am?oldid=426576"
Community content is available under CC-BY-SA unless otherwise noted.