Sprinting has a dedicated Sprint button. It is only possible to Sprint for a limited time, as the Stamina bar drains while sprinting.

The Stamina bar is represented by the yellow bar under the red health bar, and automatically refills a short time after letting go of the Sprint button, it is possible to resume sprinting before the Stamina bar fills, but there is another delay before it recharges. Jumping interrupts the refill of the Stamina bar.

In Saints Row, Saints Row 2, and the PC version of Saints Row: The Third, pressing the Sprint button alone does nothing, The Protagonist does not move until the direction control is also pressed.

In the Xbox and PS3 versions of Saints Row: The Third and all versions of Saints Row IV, pressing the Sprint button makes The Protagonist immediately sprint in the direction they are currently facing. This cannot be changed in the Options and no explanation has ever been given for this change.

In Saints Row, Sprint bonuses are unlocked by doing the Tagging activity. Increases are awarded after the completion of each set of 25 tags, and Infinite sprint is awarded after completing all 75 tags.

In Saints Row: The Third, Stamina increases are purchased via Upgrades menu in the Cellphone. There are 4 Upgrades: 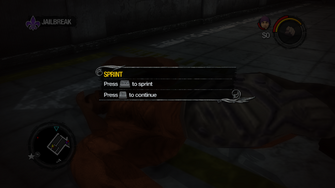 This article has been rated 06

Retrieved from "https://saintsrow.fandom.com/wiki/Sprint?oldid=325203"
Community content is available under CC-BY-SA unless otherwise noted.