"Sommerset Apartments" is a Stronghold in Saints Row 2.

Shaundi phones Playa and briefs them on Sommerset, the southern apartments that the Sons of Samedi failed to get a lock on. She explains that Sommerset is being run by The Brotherhood, where they push prostitution, gambling, and drugs. Shaundi states that if the 3rd Street Saints are going to take over Sommerset, Playa must "evict" The Brotherhood from several apartments and destroy their Mobile Drug Lab.

Students living in Sommerset hoping to get away from the commotion of campus life were in for a rude awakening as the Third Street Saints and Brotherhood engaged in a brutal gun fight that raged on between multiple apartment complexes.

Get to the apartments x3

At the beginning of the Stronghold, go to the apartments.

When all three locations are cleared, destroy the Mobile Drug Lab driving through the neighborhood. The vehicle lacks any particular defense and falls quickly to a strong assault.

Inside the apartments are a number of Improvised Weapons, including weed bricks, paint thinners, candelabras, bottles, chairs, cases, and a lawn gnome.

The reason the Samedi weren't able to get a complete lock on the University is because the southern housing was being run by the Brotherhood. Prostitution, gambling, drugs... if it's a vice college kids want, the Brotherhood are pushing it here. If the Saints want to take control of this neighborhood you're gonna have to evict these assholes. 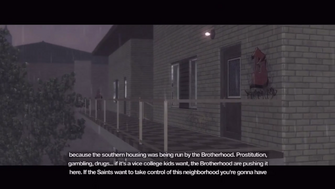 The apartments where the Stronghold takes place 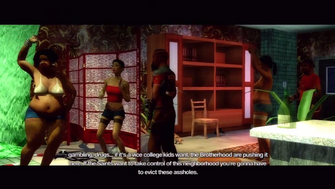 The apartments where the Stronghold takes place

This article contains no references. See Help:Cite.
Retrieved from "https://saintsrow.fandom.com/wiki/Sommerset_Apartments?oldid=425252"
Community content is available under CC-BY-SA unless otherwise noted.