Shogo Akuji is a character in Saints Row 2.

Listen Jyunichi, I know you're having a hard time...adjusting, to the way I run things here. But how about you let me deal with my father and you deal with whatever the fuck I tell you to deal with.

Shogo Akuji is the son of Kazuo Akuji, the founder of a Yakuza Gang known as The Ronin, and is one of the gang's leading figures.

Shogo is a young man dressed proudly in the flags of The Ronin, and like the rest of his gang, carries a Samurai Sword on his back. He owns a Kaneda.

Shogo Akuji is a ruthless, but air-headed man who displays poor-quality traits such as: cockiness, arrogance, and very poor leadership skills, as well as extreme hedonism. His pride stems from insecurity, due to his father constantly haranguing him and expressing his shame of him being in his family.

Johnny Gat humorously points out Shogo's ineffectiveness as a leader by explaining that he often spends more time spiking up his hair than he did riding his bike.[quote?]

Shogo Akuji runs the American branch of The Ronin in Stilwater. His gang is made up of portions of the city's Asian-American population, including many former members of Westside Rollerz.[4] Behind his father's back, he also made a protection racket deal with Dane Vogel, the Chairman and CEO of the Ultor Corporation.[reference?]

Shogo constantly tries to gain his father's approval, but Mr. Akuji is always disappointed in him, as he sees him as nothing more than a liability.[reference?] He also fails to see the gravity of the situation when the resurrected 3rd Street Saints rob The Ronin-owned Poseidon's Palace.[5] Shogo is also not happy when his father decides it is time to come to Stilwater and look over the situation while teaching him how to lead.[reference?]

Shogo sends a team of Ronin to kill the Saints, but most of them are killed by Playa.[6] After Jyunichi saves Kazuo Akuji from an assassination attempt at Wardill Airport, Kazuo makes Jyunichi the intermediary between himself and Shogo.[7] Kazuo takes complete control of The Ronin, and demotes Shogo to the rank of lieutenant as punishment for his consistent failures. Humiliated and dishonored, Shogo turns his anger and jealousy on Jyunichi for his "betrayal" and because Jyunichi has won Kazuo's approval. Consumed with thoughts of revenge, Shogo gives up Jyunichi's location to Playa, hoping to win favor with his father by having Jyunichi out of the way. Although this results in Jyunichi's death, it does not improve the relationship between Shogo and his father.[8] Shogo sends a team of Ronin to kill Gat at the hospital, but Playa manages to extract Gat to safety.[9]

After Kazuo breaks the business relationship between Ultor and The Ronin, Dane Vogel gives up the Kazuo's location to the Saints, resulting in the destruction of The Ronin HQ downtown.[10] In a last attempt to destroy the Saints and gain his father's love and respect, Shogo and a team of Ronin try to kill Gat and Playa at Aisha's funeral. Gat, blaming Shogo for Aisha's death and infuriated by his attack at her funeral, breaks Shogo's leg and jaw, then buries him alive as an act of revenge.[11] The newspapers later report his death.

After taking over Downtown, a storybook cutscene plays showing that things are going well for the DeWynter Twins. However, things are not all well as Shogo, along with his father Kazuo, Jyunichi, William Sharp, and Killbane form an alliance against the Ultor group.[12] In the Shawarma storybook cutscene after completing City Takeover, is it revealed that Shogo is defeated, along with the others, and Shogo is now part of Shakespeare's new passion play, where Shakespeare reenacts Shogo's live burial from Saints Row 2.[13]

You two have humiliated my family for the last time!

How noble...nobility is sorely over rated.

I didn't kill her!

Just kill me damn it, don't do this!

Ronin no moto ni hizamaduke! (Bow before The Ronin!)

Omae ni Chance wa nai. (You have no chance at all.)

Omae wo koroshite ore no chichi wo sonkei sasete miseru. (I'll kill you and make my father proud of me.) 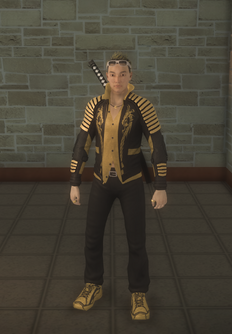 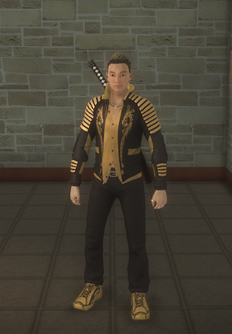 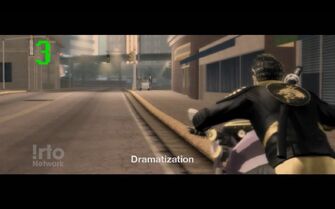 Shogo in The Anna Show cutscene 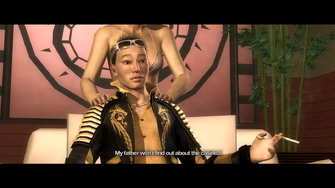 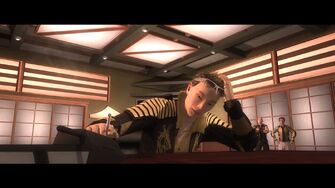 Shogo being scolded by his father on the phone 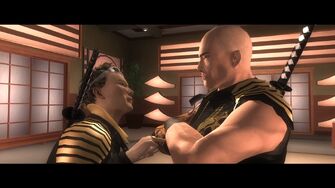 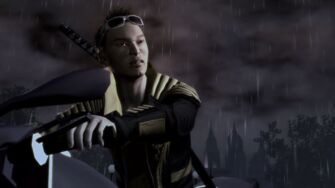 Shogo seconds before being buried 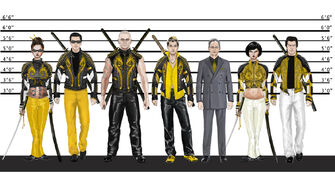 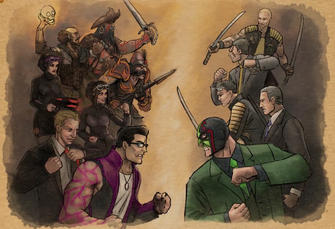 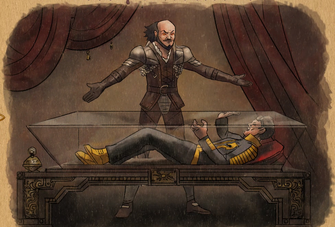 • List of Missions and Cutscenes to check
Retrieved from "https://saintsrow.fandom.com/wiki/Shogo_Akuji?oldid=424147"
Community content is available under CC-BY-SA unless otherwise noted.