"Semi-Charmed Life" is the ninth and final mission of the Westside Rollerz story arc in Saints Row.

Julius Little: "That was a hell of an explosion. You okay, playa?"
Playa: "I got ran over by a mothafuckin' truck, what you think?"
Julius Little: "Oh, quit bein' a bitch."

— Julius Little and Playa, in a phone call.

In the final Westside Rollerz mission, Joseph Price attempts to run over Playa in a Goliath truck at Foreign Power, where the two were supposed to meet. Unhappy with this, Playa attempts to chase Price down across the freeway.[2]

After successfully killing Price, Julius Little calls Playa and congratulates them on defeating the Westside Rollerz. He remarks on the mysterious buyers Sharp mentioned before, and then says to Playa that he'll see them at the church later.[3]

We done and fucked the Rollerz hard. They ain't got nothin' left. There are a few loose ends, though, like who the fuck those buyers are Sharp was talkin' about. I got a feelin' there's some shit goin' on we don't know about. I'll catch ya later at the church.

His gang in ruins, a furious Price called you up and challenged you to a showdown at the car dealership. When you arrived, Price tried to run you down with a truck. He led you on a dangerous chase down the expressway, but you managed to kill the crazed leader of the Rollerz. Now that both Price and his Westside Rollerz are in pieces, there's nothing stopping the Saints from taking over their turf.

The Westside Rollerz finale can only be played upon completion of the previous mission, "No Time to Mourn", and all related Strongholds: "Copperton Receiving Station", "Pleasant View Storage", "Price's Mansion", and "Tidal Spring Apartments".

After completing all Strongholds, Playa receives a phone call from Price, and the mission marker is added to the map.

The objective of the mission is to chase after Joseph Price, who is driving a Goliath clockwise along the freeway across Stilwater.

There is a 2 minutes timer to reach him. Typically, he can be reached with more than 1 minute remaining while driving the supplied Bootlegger, sooner with a faster vehicle.

Although this objective includes killing Price, the objective is completed upon reaching the truck.

Take out the cars on Price's trailer.[5]

Like the previous mission, infinite ammunition is provided. Price has only one method of attack - throwing Pipe Bombs behind him. Pipe Bombs are weak and easy to dodge. He also does not drop them at a consistent rate.

Price travels faster than all Civilians cars on the freeway, and regularly rams into other vehicles, damaging his Goliath, and the cars on the trailer.

If Price gets ahead at any point, there is a 30 second timer to catch up.

This objective is completed after destroying one car.

Keep taking out the cars.[6]

Once all 7 vehicles are destroyed, the cab must be destroyed - like the cars it easily goes down.

Once the cab is destroyed, the Westside Rollerz story arc is complete. If the Vice Kings and Los Carnales story arcs have also been completed, the "Battlefield Promotion" cutscene plays, and the mission "Stuffing the Ballot" becomes available.

The mission can be failed by getting smoked, busted, or losing Price's truck.[8]

Jack Armstrong: "Jack Armstrong in the newsroom. If you were wondering why it took you a lot longer to get home today, your afternoon commute was stalled by a terrific two truck collision on an exit ramp in the downtown area, snarling traffic in both directions. Reports that gunfire was heard prior to the accident have not been substantiated. An out-of-control semi collided with a fully-loaded fuel tanker. While the driver of the semi was killed instantly, miraculously the driver of the tanker walked away unharmed. We'll have more details from Officer Mike McCabe in our Eye-in-the-Sky traffic copter just ahead. Traffic and weather on the nine's, news as it happens, top and bottom of the hour. I'm Jack Armstrong."

Meet me at the car dealership, if you think you got the balls. We're ending this tonight.

Julius Little: "That was a hell of an explosion. You okay, playa?"
Playa: "I got ran over by a mothafuckin' truck, what you think?"
Julius Little: "Oh, quit bein' a bitch."
Julius Little: "We done and fucked the Rollerz hard. They ain't got nothin' left. There are a few loose ends, though, like who the fuck those buyers are Sharp was talkin' about. I got a feelin' there's some shit goin' on we don't know about. I'll catch ya later at the church."

Aight, he's pretty fucked up. I set up a present for ya at the next off ramp. Run that bitch off the road. 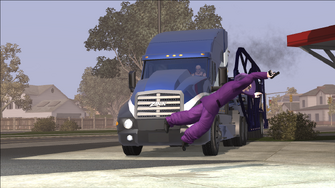 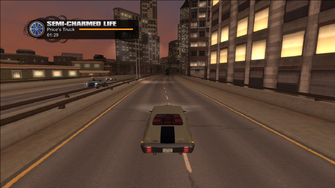 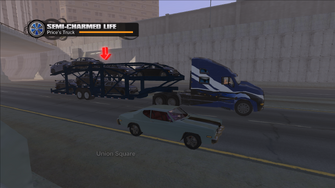 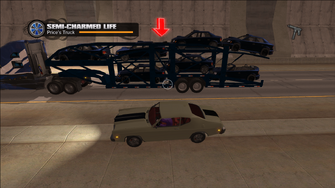 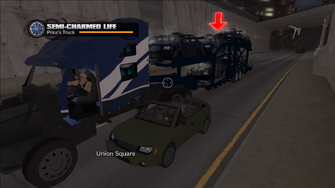 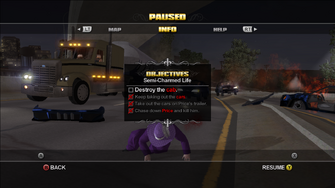 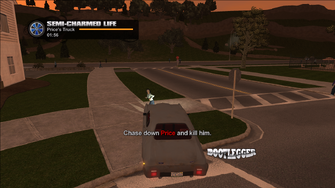 Semi-Charmed Life - Chase down Price and kill him 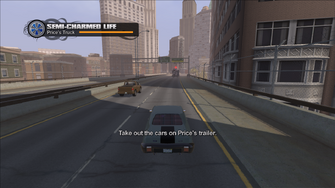 Semi-Charmed Life - Take out the cars on Price's trailer 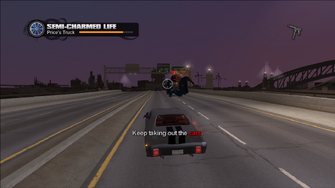 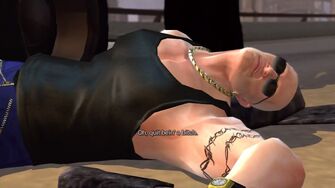 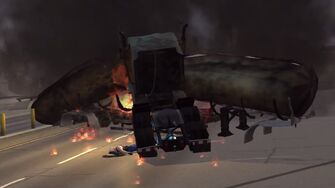 Joseph Price's corpse among the flaming wreckage of his Goliath, including a destroyed fuel tanker which does not appear during gameplay 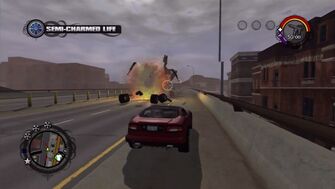 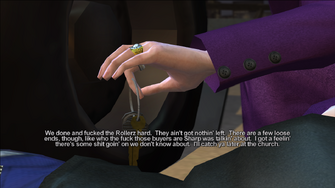 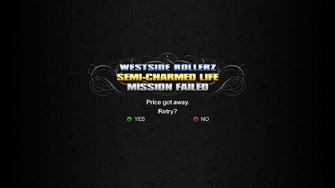 Semi-Charmed Life - Price got away

This article has been rated 16

Retrieved from "https://saintsrow.fandom.com/wiki/Semi-Charmed_Life?oldid=421540"
Community content is available under CC-BY-SA unless otherwise noted.