Satan is a character in Saints Row: Gat out of Hell.

Playtime is over Mr. Gat. Save them if you can.

— Satan, before his showdown with Johnny Gat

Satan is the ruler of New Hades, a city located in Hell. He is also the father of Jezebel and the main antagonist of Saints Row: Gat out of Hell.

Satan is the driving force behind the events of the game. Early on, he causes trouble for the 3rd Street Saints by kidnapping Playa during a surprise birthday party for Kinzie Kensington, and plans on forcing them to wed his daughter.[reference?]

Satan rules his domain with cruelty and absolute ruthlessness.[reference?] He cares little for anything but his own self interests. This even applies to Jezebel, leading the two of them to have a strained father-daughter relationship.[reference?]

Satan's history prior to the conflict with Johnny Gat is revealed in Audio Tomes.

Satan used to be in heaven before he got cast out to hell.[2] From then on, he transformed Hell from a "pleasant timeout space" into a fiery purgatory.[2] He was determined not to bow to God again.[3] At some point Satan waged a war against Heaven, but he lost and Hell was damaged in the process.[4] He blamed the defeat on his general, Vlad, even though Vlad had warned Satan that they were not ready for a prolonged conflict and did what he could to win the impossible battle once it became clear it would happen anyway.[4] Having imprisoned Vlad, Satan looked for a new general to bring greatness to his army.[5] 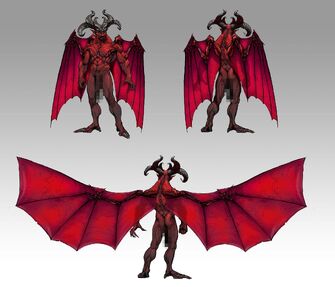 Gat out of Hell concept art of Satan

This article contains no references. See Help:Cite.
Retrieved from "https://saintsrow.fandom.com/wiki/Satan?oldid=424338"
Community content is available under CC-BY-SA unless otherwise noted.