See Category:Saints Row Wiki for other policies and guidelines.

Any files related to the Saints Row series may be added to relevant articles.

Videos are discouraged, because they cannot be easily edited.

GIF files are better suited if something needs to be shown in motion.

Other methods, such as the edit page uploader, do not give detailed error messages, so if the file is blocked due to a filter it is not possible to know why.

The foremost reason why PNG is preferable to JPG is compression artifacts, which are very easily spotted in screenshots of video games, particularly with solid blocks of colour in text, such as the HUD, and mission end screens.

High resolution and wide-screen are both less important than having the image displayed in the correct aspect ratio.

If your HUD elements are not perfectly round, then your resolution is wrong, and should be changed to a resolution which displays the HUD correctly. 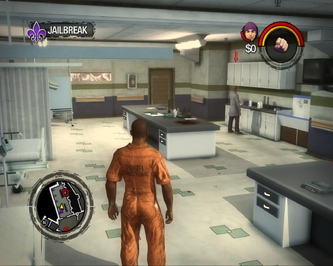 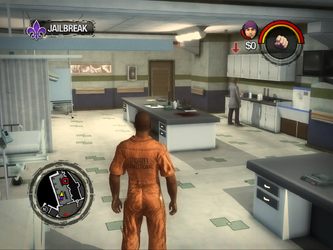 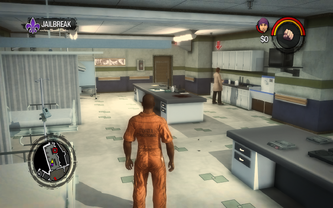 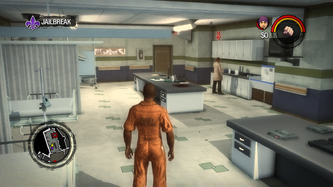 The PC versions of Saints Row have multiple graphic settings.

Screenshots taken with high settings selected are preferred, but screenshots of low graphic settings are allowed. 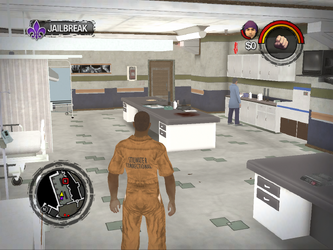 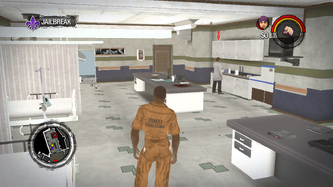 Nudity is not against the policies of the Saints Row Wiki.

The "Wikia Community Guidelines" specifically state: "Artistic nudity may be allowed - for example a classical painting, or a small amount of nudity from a game screenshot."

In most cases of images being deleted for Terms of Use Violations, Wikia Staff have refused to explain exactly which element of the image was deemed to be offensive, but have recently clarified:

Wikia Staff have clarified on multiple occasions that female characters wearing pasties over their nipples are allowed, but have from time to time deleted images with star-shaped pasties over their nipples because they did not inspect the image closely enough. They have also in the past reverted an image of Playa in their default jumpsuit to an image containing the identical jumpsuit, citing a violation of the terms of use.

If Wikia Staff mistakenly delete non-nude images, Saints Row Wiki admins will dispute the deletion and have them restored.

Wikia Staff have never deleted an image featuring the default in-game censor blur, but have refused to clarify whether a user-added censor blur or censor bar would be acceptable for other images.

If you are offended by nudity, please do not play any games in the Saints Row series, as they all feature content far worse than nudity.

For instance, imagine an image from the mission "We're Going to Need Guns", showing Pierce arriving in an Oppressor, it could be named, from most to least useless:

These may be unique titles which state the name of the related article, but they would not be easy to find in a gallery when editing without looking up the title first.

For comparison, these are good filenames:

They would both would be easy to find on the character page, vehicle page, or mission page, as well as through a file search. Looking at the filename alone, anyone who has played the mission knows exactly what the image looks like.

Use appropriate capitalisation, punctuation, and spacing.

Amongst other things, the titleblacklist blocks filenames:

user:452 has uploaded over 5000 files and has never had a well-named file blocked by the filters.

If a file you are attempting to upload is blocked by the titleblacklist, and you think that the filename is descriptive and should not be blocked, contact user:452.

Screenshots make great evidence, and are ideal to use as references for all sorts of information

The preferred image reference format is:

While all files are welcome, poor quality files should be replaced.

Replacement files should generally exceed all attributes of the former file. Obviously, replacing a high-resolution photograph of a TV screen with a standard resolution screenshot is fine. Clarity is more important that resolution. In addition to clarity, composition is also important, so widescreen images should not be replaced with non-widescreen images if there are details missing.

When replacing nearly identical files, they should be ideally be uploaded as a new version of the same file, either via the link on the File page, or by using the same filename as the existing file. Unfortunately, this is only possible if the image is of the same filetype. It is not possible to directly replace a JPG image with a PNG image. PNGs are preferred, so do not convert a PNG to JPG just for the sake of using the same filename. If you have taken a PNG screenshot, upload the new PNG and mark the JPG for deletion, with the summary that it has been superseded by the PNG.

File replacements should only be used in cases where the image fulfills the same purpose:

The purpose of these points is to ensure that the file history is consistent, and that any current usages of the file remain accurate, and that captions don't suddenly become incorrect.

When replacing an image in an article with a different image, one of two things should be done:

All duplicates should be marked for deletion, and will be deleted.

To mark files for deletion, add {{delete}} to the top of an article with the reason for deletion as a template parameter

Files with names which do not adequately describe the content may be deleted at any time, as it may not be possible to ascertain the intended purpose of the file.

To request a specific image, use {{image}}, which will be automatically listed on Category:Image requests.

This template can be used on article pages to request an image related to the subject.

Once an image request is fulfilled, remove the template from the page.

Anyone may fulfil any image request. However, as with Proposals, if someone else is actively working on a set of images for a request, please either give them the opportunity to complete it, or contact them offering your assistance before taking other images in the set yourself. They may already be working on other similar images, so it would be a waste of time - theirs or yours - to independently take other images in that set.

{{image}} should be placed on the File pages of images which have been identified as low quality, so that others know to replace them.

Images should be marked for replacement if the image:

While most files are added to articles by the uploader soon after uploading, some people upload a bunch of images in batches for later use in articles.

As with image requests and Proposals, it is polite to allow the uploader a reasonable amount of add their images to articles themselves. If you wish to help, contact them offering your assistance before adding recently uploaded files to articles.

The majority of unused files should be added to articles. They can be added by anyone.

Files which are removed from articles because they are replaced or duplicates should be marked with {{delete}}, or they are likely to be re-added to the article.

Unused files may be deleted by admins at any time if a use for them cannot be found. Users who think that an unused image does not have a purpose should mark them for deletion.

If a file is not displaying for some reason, it is likely due to a temporary problem with Wikia's image cache.

Images on the Saints Row Wiki are not categorised. Anyone adding article categories to images will be regarded as a vandal.

The Saints Row Wiki is about the Saints Row series, but there are a few special cases where non-game images are permitted.

Images of voice actors in real life are only permitted when the character model is based on a real person.

In general, common sense should be used, but here are some specific things.

Editing the game files to take a screenshot of a 50 foot tall Shaundi is not allowed.

Question
Am I allowed to modify the game files to show X and upload an example screenshot?
Answer
Yes, so long as X is a singular item included in the game files.

Modifying the game files to merge two unrelated things - like creating a RPG which fires chainsaws - is not allowed, even though both the RPG and chainsaw are things in the game.

If there are two things in the game files which you would like to mod the game to show better, show the separately.

The clearest example of this is the Side Shooter. It exists in the original game, and is used in several mission, but cannot be seen from the outside under normal conditions, so it is acceptable to upload images which are only possible through modifying the game files.

However, modding the game files to re-colour the Side Shooter, or any vehicle which could not be done without mods serves no useful purpose. While it's great that it's possible to do this, these images have no place on the Saints Row Wiki, as this may cause confusion.

Cheats are present in the unmodified game, so images of cheats are allowed.

Example images of disabled Cheats which are present in the unmodified game files are also allowed.

Glitches are present in the unmodified game, so images of glitches are allowed.

Screenshots achieved through glitches should still clearly indicate that a glitch.

Wikia's Terms and conditions state that Wikia is not a personal file host. This means that users have no inherent right to store files here.

The Saints Row Wiki permits users to upload images for their user-page, but must meet several requirements.

It is the responsibility of the uploader to ensure that their personal files meet the guidelines.