Saints Row 2 is a tie-in game for Java-enabled mobile phones.

The Saints Row 2 mobile game was developed by G5 Entertainment and published by THQ Wireless in October 2008 to accompany Saints Row 2. The game follows the story of the series where Playa returns from jail and fights to protect and expand the 3rd Street Saints' territory.[1][2]

The player can kill, threaten, rob, carjack, and otherwise force other gangs out of Saints territory.[1] For example, objectives in the tutorial mission include hijacking a car, killing a policeman, driving to Forgive and Forget to lose the police pursuit, and mugging a Civilian.[3]

There are Fast Food restaurants that restore health, gun stores for weapons, and spray paint shops to decoy the player when pursued by the police. An on-screen Mini Map displays nearby locations, and there is a larger citywide map on the Pause Menu that does not show detailed locations.[1] The city is split into zones,[2] and the game's mission objectives largely consist of driving to locations and shooting things.[4] Mission examples include assassinations, bomb-planting, and robbery.[2]

A knife, called the "pig sticker", is received early in the game, in a level where the player stabs a policeman near a police station.[1] Firearms that feature auto-aim are received later, as well as sequences using a sniper rifle.

Cash is earned by completing missions and robbing Civilians, and us used to buy food, weapons, spray paint, and accessories for the character's Crib.[1]

The player can steal, carjack, mug, shoot, stab, and kill computer controlled enemies and Civilians. There are special for robbing, stealing, and carjacking.[names?] The game features minigames for robbing pedestrians, stealing, and hijacking vehicles.[4]

While robbing, the player taps happy and angry face icons to terrorize the victim into giving more money.[1] During Theft, a Tetris clone lets the player fit more items into the truck,[4] and the Hostage minigame lets the player earn more money for scaring the captive passenger by driving at high speeds.[1]

When driving, control options include "directional steering" where "left" and "right" controls the vehicle in that direction (like a steering wheel) and "up" accelerates, and another option where the player presses a button corresponding to the desired direction.[1] The player targets enemies by pressing the pound key and then pressing "5" repeatedly, which also leaves the character vulnerable.[2] Players can run faster than the cars can drive.[3]

It was developed by G5 Entertainment, where it was known as "Project Sienna" in development and was first announced in June 2008,[5] and published by THQ Wireless on the Java 2 Micro Edition (J2ME) platform.[2] The game was built on their proprietary Talisman engine, which G5 Senior Producer Mike Zakharov said in 2008 enabled the game to have a big environment with many things to do as "one of the most complex modern mobile games".[5]

Compared to Saints Row (mobile), the Saints Row 2 mobile game fixed issues of small sprites and too much vehicle traffic. Additionally, the developers changed the camera perspective from directly overhead to a slight angle.[3] 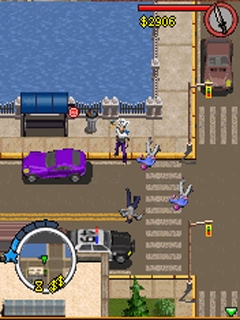 Screenshot of gameplay, with minimap in lower left corner and corpses in the street

This article contains no references. See Help:Cite.
Retrieved from "https://saintsrow.fandom.com/wiki/Saints_Row_2_(mobile)?oldid=425897"
Community content is available under CC-BY-SA unless otherwise noted.