Five years have passed since your former Saints crew betrayed you. As you awake from a coma for the first time since that fateful day, you find the Stilwater you once ruled is in disarray. Unfamiliar gangs have laid claim to your territory, rival factions have taken over your rackets, and cash-hungry corporations have laid waste to your once proud 3rd Street home. Abandoned and left scarred with an unrecognizable face, you seek out a plastic surgeon to begin your new life on the streets of Stilwater.

Respect can only be earned in Stilwater, and that requires a lifestyle that reflects your unique personality. Your crib, your crew, and your character define who you are on the streets and how you are perceived. The image you portray is as important as the decisions you make in a city ruled by false bravado and impulsive behavior. The only constant is the need for an identity that reflects your individuality and is backed up by your 12 gauge.

Style and image can only take you so far in a world where actions speak louder than words. Sometimes sending a message to your enemies requires heavy lifting, like that of a rival gang member into oncoming traffic. Respect in Stilwater needs to be taken, and what better way than to grab it from the hands of a gang full of enemies by means of a satchel charge.

The fight to reclaim Stilwater does not have to be waged alone. The Saints once ruled these streets as a crew of brothers, and their return to the top can help be secured through co-operative alliances. The time has finally come to seek revenge against your rivals to reestablish your crew as the rightful kings of Stilwater.

Saints Row 2 is more cartoonish than Saints Row, though the cutscenes and story are darker.

After the explosion of Alderman Richard Hughes private yacht in Saints Row,[1] Playa falls into a coma for five years[2], and is kept in intensive care at Stilwater Penitentiary, receiving extensive plastic surgery due to burns suffered in the explosion. During this time, the 3rd Street Saints disband, and their legacy is soon forgotten.[3] With Julius missing and the Saints gone, a power vacuum in Stilwater allowed three new gangs to take over: The Brotherhood, Sons of Samedi, and The Ronin

Upon awakening, Playa breaks out of prison with fellow inmate Carlos Mendoza[4]. After Playa learns of the Saints' dissolution, Carlos advises Playa to keep his head down and learn as much about Stilwater as he can.[5] While visiting Tee'N'Ay[6], Playa learns of Johnny Gat's arrest and trial on the news, and rescues him from his trial.[7] Deciding to resurrect the Saints, Gat helps find a new hideout[8], and Playa, as leader of the Saints, sets to work recruiting new members, including Carlos, Pierce, and Shaundi.[9] The reborn Saints soon formulate a plan[10] to re-claim the city of Stilwater from three new gangs that have taken over in their absence.

Maero, the leader of The Brotherhood, initially offers to make a truce with the Saints, offering them a deal of 20-80. Playa, offended by the offer, starts a gang war.[11] He first kidnaps Donnie and forces him to blow up several of the Brotherhood's trucks[12] and he also replaces Maero's tattoo ink with nuclear waste, disfiguring him.[13] In retaliation, Carlos is kidnapped and dragged through the street, tied to the back of a truck.[14] By the time Playa rescues him, Carlos is gravely injured and Playa is unable to free him from his chains and kills him.[14] The Saints then kidnap Maero's girlfriend, Jessica, and puts her in the trunk of a car in a monster truck arena. Maero, not knowing his girlfriend was in the car, rides over her in his truck, crushing the car and his girlfriend. After exiting the truck, Playa hands him the keys to the trunk and walks away.[15] Much of the Brotherhood is then arrested in a police crackdown.[16] Maero threatens Dane Vogel, the Ultor executive handling the company's business in Stilwater, to release his imprisoned allies, only for Playa to kill them before they reach Stilwater's streets.[17] Vogel then attempts to seize the weapon shipment from the Brotherhood, only for the Saints to snatch it from both of them.[18] Now heavily armed, the Saints destroy the Brotherhood's dockside headquarters[19] and Playa kills Maero in a demolition derby.[20]

To eliminate the Sons of Samedi, a group of Haitian drugs dealers, Playa works with Shaundi to take over the trade of their trademark[21] designer drug Loa Dust, killing the Samedi's dealers and destroying their drug-manufacturing infrastructure. Shaundi's ex-boyfriend and now a Samedi enforcer, DJ Veteran Child, kidnaps her, but she is rescued by Playa after he shoots his way through his nightclub and kills Veteran Child.[22] Afterwards, a limousine belonging to The General, Samedi's leader, pulls up and kidnaps Playa. Drugged and forced into the vehicle, The General explains to Playa how much he is displeased with The Saints taking over his business and territory. The General almost kills him but Playa manages to escape from the limo in time.[23] After destroying an inbound shipment of Loa Dust Playa sets out to kill the Samedi's leadership.[24] First, Playa kills the gang's voodoo-using second-in-command, Mr. Sunshine, at his hideout.[25] Then, after Shaundi hacks Stilwater's CCTV system,[26] Playa ambushes the convoy with the gang's leader, The General, and kills him in a car chase in an inside Rounds Square Shopping Center.[27]

Playa, with Johnny Gat and Pierce, attacks the Ronin by robbing a casino they and the Ultor Corporation share ownership in.[28] Incensed by this, Kazuo Akuji, the father of the Ronin's leader Shogo Akuji, travels to Stilwater himself to take control of the situation.[29] Shogo attempts to recover the stolen cash by having his second-in-command, Jyunichi, kidnap Gat's girlfriend Aisha; this ends with Aisha dead and Gat incapacitated after being stabbed by Jyunichi.[30] Playa subsequently kills Jyunichi in revenge.[31] By the time Gat recovers, Kazuo Akuji has broken the Ronin's connections with Ultor;[32] Vogel reacts by giving the Saints the location of the Ronin's headquarters,[33] which Playa and Gat destroy.[34] Disgraced, Shogo attacks the Saints during Aisha's funeral, and Johnny avenges her death by killing all the Ronin present and buries Shogo alive.[35] Kazuo continues to attack the Saints, including Mr. Wong, and is killed in a duel with Playa during Stilwater's Chinese Heritage Festival.[36]

As the Saints take over Stilwater, they find themselves in an unexpected conflict with the Ultor Corporation, who seek to eradicate the gang in order to further their own goals for Stilwater.[37] Formerly a company which produced clothes and household brand products, Ultor has used its immense funds to drastically reshape both itself and the Saint's Row District within the last few years.[5] In the process, Ultor became a major, powerhouse corporation with its own private army, and they extended their power, reach, and influence into almost every aspect of Stilwater society, including the Stilwater Police Department and Masako teams. Ultor sends the latter directly after Playa, Shaundi, Pierce, and Gat. While Gat is able to take care of himself, Playa is forced to fight off a Masako team and rescue Pierce and Shaundi before they are killed.[38] Angered, Playa destroys The Pyramid, an underground research complex owned by Ultor.[39] Under pressure from Ultor's board of directors as the company is targeted by the Saints, Vogel leaks the location of the board to Playa: a party on a boat not far from the Saints Row district.[40] Not caring where the information came from, Playa eliminates the board. Looking on at the destruction caused by Playa, Vogel congratulates himself by telling his assistant to move his things to his new office, knowing he is about to be promoted.[41] Vogel's victory is short lived, however. During his speech outside of the Saints Row Church, Gat trains a sniper rifle on Vogel, with Playa nearby.[42] A security guard catches Gat, however, and Playa is forced to chase after Vogel, who escapes to the Phillips Building . Using the Tornado attack helicopter, Playa brings down the building's security, and enters Vogel's office. After hearing Vogel plea for his life, Playa kills the company chairman and CEO with a bullet to the head, which also sends him falling from the top of the tower to the helpless police officers below, leaving no one to challenge the Saints' control over Stilwater.[43]

3 Title Updates have been released on Xbox 360, and equivalent patches on PS3, as well as 1 for PC.

• Implemented protection against disc read errors. May reduce or eliminate crashes experienced by some users.

There are 33 pieces of Downloadable Content on the Xbox Live Marketplace.

Disgruntled Ultor microbiologist Tera Patrick holds the key to the corporation's illicit research activities and revenue generating schemes. Help Tera dismantle the Ultor Corporation by exposing the megacorp's seedy operations to the citizens of Stilwater. Battle through three all new co-op enabled missions. Commandeer new air and ground vehicles including attack aircraft and luxury sports cars. Customize your character with new hairstyles, law enforcement uniforms, and all new clothes. Own the streets in new Strong Arm and Gangsta Brawl multiplayer maps. These are your Saints and this is your city like you've never seen it before… fully exposed!

There is a civil war brewing within the Ultor Corporation. Dex, Ultor's newly appointed Head of Security, is running a black market nuclear weapons operation aided by Ultor management. Meanwhile, a defected Ultor executive offers the Saints a chance to bring the entire operation down. Take revenge in style with new transportation options for aircraft, exotic cars, and superbikes. Redefine your character with all new customization options including brand new outfits and facial bandanas to change your identity. Take the battle to the streets with brand new Strong Arm and Gangsta Brawl multiplayer maps or challenge your friends in an all new Co-Op competitive mode. Now it's time to put a permanent end to Ultor's corruption.

Pimp out your personality with over 60 brand new customization items including Unkut watches, necklaces, bracelets, T-shirts, tank tops, hoodies, and camisoles. Change it up with a preppy polo, or dress it down with some jeans at Sloppy Seconds. Ink-up your character with 16 all new tattoo options. 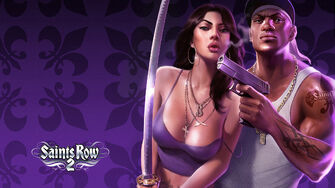 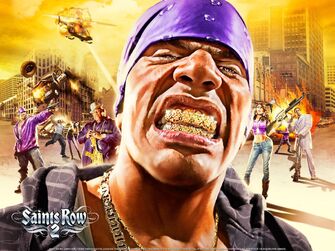 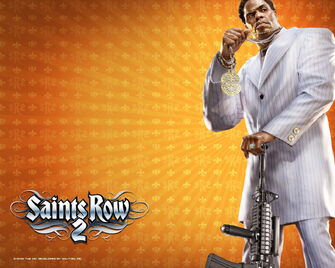 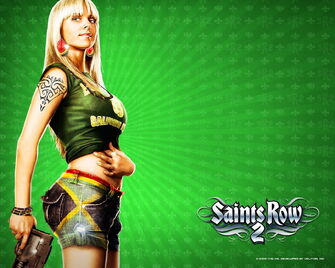 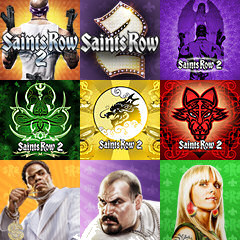 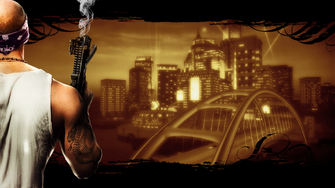 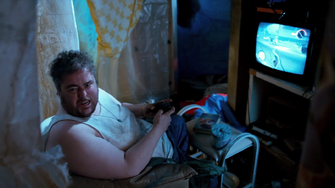 This article contains no references. See Help:Cite.
Retrieved from "https://saintsrow.fandom.com/wiki/Saints_Row_2?oldid=423019"
Community content is available under CC-BY-SA unless otherwise noted.