Saints Row is an announced film based on the Saints Row series.

On February 24th 2009, it was reported that rapper 50 Cent expressed his intentions on making a movie based on the Saints Row franchise.[1] While in a conference call promoting his new game 50 Cent: Blood on the Sand, he stated:

With my relationship with THQ, they'll actually see me develop Saint's[sic] Row into an actual screenplay and into a film project. I'm optioning the rights for that right now, so they'll see that before they see me do it from my own perspective for my game.

A year later, on June 16th 2010, it was further reported that Danny Bilson, THQ's executive vice president of core games, had said the publisher intended to do a Saints Row film. He went on to say that he hoped that "it [would] launch on the same day as the third Saints Row game", and that a "major filmmaker" will be involved.[3]

Saints Row: The Third was released during November 2011, although nothing has been mentioned of the movie since Danny Bilson's conference call with GameSpot in 2010.

A Saints Row film was announced to be in pre-production in April 2019, with production by Fenix Studios, Koch Media and Occupant Entertainment. F. Gary Gray is currently set to direct the film with a screenplay written by Greg Russo.[4] 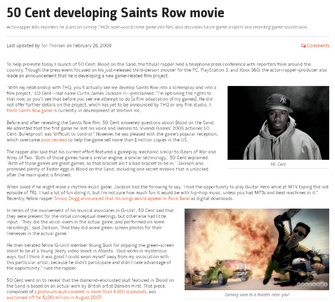 This article contains no references. See Help:Cite.
Retrieved from "https://saintsrow.fandom.com/wiki/Saints_Row_(film)?oldid=424617"
Community content is available under CC-BY-SA unless otherwise noted.