Saints Row: The Third[2] is a game in the Saints Row series.

The game begins with the player "on top of the world, right at the beginning of the game, with all the perks that go along with being the head of an elite criminal organization".[3] Like the previous two games in the series, Saints Row and Saints Row 2, the game is an open-world sandbox. Whereas the previous games charted the 3rd Street Saints' rise to power over Stilwater, Saints Row: The Third charts their adventure in a new city: Steelport.

Professor Genki, a character from the Professor Genki's Super Ethical Reality Climax Activity, has served as an unofficial mascot for the game[reference?], and has two vehicles[4][5] and a weapon[6] named after him.

At Gamescom 2018, it was announced that Saints Row: The Third would be ported to the Nintendo Switch.[7]

Years after taking Stilwater for their own, the Third Street Saints have evolved from street gang to household brand name, with Saints sneakers, Saints energy drinks and Johnny Gat bobblehead dolls all available at a store near you. The Saints are kings of Stilwater, but their celebrity status has not gone unnoticed. The Syndicate, a legendary criminal fraternity with pawns in play all over the globe, has turned its eye on the Saints and demands tribute.

Refusing to kneel to the Syndicate, you take the fight to Steelport, a once-proud metropolis reduced to a struggling city of sin under Syndicate control. Take a tank skydiving, call in a satellite-targeted airstrike on a Mexican wrestling gang, and defend yourself against a highly-trained military force using only a sex toy in the most outlandish gameplay scenarios ever seen, igniting a city-wide war that will set Steelport on fire.

Saints Row: The Third gives you control of the Saints at the height of their power, and you live the life to show for it. Now Steelport is ripe for the taking, and it's up to you to make the city your own. Mold the skyline based on your choices, outfit your crew in classy gangster gear or furry costumes, and make life-or-death decisions that will change Steelport, and the Saints, forever. This is now your city. These are now your rules. STRAP IT ON.

Saints Row: The Third takes place in 2014,[8] "years after"[3] the events of Saints Row 2. With the Sons of Samedi, the Ronin, and the Brotherhood of Stilwater dispersed,[9][10][11] both Dane Vogel and Julius Little dead,[12][13] and Dex gone,[14] the 3rd Street Saints have gone from a small-time gang from the Row to a household brand name in Stilwater (complete with 3rd Street Saints-branded clothes, energy drinks and Johnny Gat bobble head dolls, as well as a movie deal in the works).[3] Furthermore, with Vogel gone, the 3rd Street Saints have partnered with their former nemesis, Ultor, and have become the "Saints/Ultor Media Group", now that Eric Gryphon has firmly secured his position as Chief Executive.[15]

The game begins with the 3rd Street Saints planning to rob a bank in Stilwater.[16] After the execution of the plan goes awry (partly due to Josh Birk, an actor who accompanied the robbery to research for a part in an upcoming film about the Saints, tripping a silent alarm), Playa, Shaundi, and Johnny Gat find themselves in prison, only to be bailed out by Viola and Kiki DeWynter following the orders of Phillipe Loren.

Aboard his private plane, Phillipe Loren reveals himself; it transpires that the Saints robbed a bank belonging to The Syndicate, and Loren, along with his personal assistants Viola and Kiki DeWynter; demand they turn over 66% of their assets in return for their lives. After Gat blatantly refuses, a skirmish leads to Shaundi and Playa escaping Loren's personal plane via parachute and heading for a new city, Steelport, beneath, while Gat is killed by Loren's enforcers while attempting to commandeer the plane back to Stilwater.[17]

Steelport is a city that was created as factories flourished with little city planning, and since has suffered from economic failure, contrasting the glamour of Stilwater. Steelport is the Syndicate's hub city, and the Saints must take Steelport from them. To extend their reach they have divided their control of the city through three gangs. Morningstar, lead by Loren directly, are typically European men and women, with impeccable taste, selling guns and handling the prostitution rings.[18][19] The Mexican wrestler Killbane controls the Luchadores who handle the drug trade and gambling.[20] The Deckers, led by hacktivist Matt Miller, are computer geniuses, and handle the money laundering.[21] As the gang war intensifies, a fourth group, the Special Tactical Anti-Gang (STAG) unit from the government attempts to halt gang activity, whether it be the 3rd Street Saints or the Syndicate.[reference?]

Choices are given at the end of major missions. No choices affect the outcome of the game except for the choice during Three Way.

In a pre-release developer interview, it was stated that choosing to keep the Syndicate Tower during The Belgian Problem would unlock it as a Crib, which "[would be] beneficial as it's in a well-situated area of the city".[22] In the game, it is not actually a Crib, instead simply giving an hourly cash bonus if not destroyed.[23]

Missions provide the narrative of Saints Row: The Third. For the first time in the series, Respect is no longer needed to progress through the storyline.

A large cast of characters provide the driving force of the narrative of Saints Row: The Third. Both old and new characters are introduced.

Main article: Activities and Diversions in Saints Row: The Third

Activities award both unique rewards and Respect, a form of currency which is used to make various Upgrades, which are then bought using money.

Diversions return in Saints Row: The Third, such as diving off a building with a parachute.[22]

Weapons allow the player to engage enemies in combat, both offensively and defensively. Unlike the previous games, weapons can now be upgraded.[22]

Vehicles allow the player to travel across the city of Steelport with efficiency. To aid in this, there is a large variety of vehicles, including cars, boats, planes, helicopters, tanks, VTOLs, and even hoverbikes.

The exploits of the Third Street Saints continue! With the Saints Row: The Third Season Pass you gain access to three future mission packs - Genkibowl VII, Gangstas in Space, and The Trouble With Clones - for expanded gameplay with everyone's favorite street gang. And as a bonus, you gain immediate access to all-new costumes and vehicles from Steelport's #1 television drama - Nyte Blayde. Strap it on!

Downloading the packs separately costs around USD$24 (USD$6.99 per mission pack and USD$2.99 for the Nyte Blayde Pack). Which means the Season Pass saves 16.66%.
The Season Pass came free when pre-ordered by THQ's website.

Includes the Funtime! Pack, the Shark Attack Pack, the Invincible Pack and the Money Shot Pack. Dominate Steelport with the Mollusk Launcher, the Shark-O-Matic, the Ultor Interceptor Jetbike, tons of cheats and much, much more!

Includes the "Z Style Pack", the "Witches and Wieners Pack", the "Steelport Gangs Pack", and the "Horror Pack.

Horror? Bloodsucking? Witches AND Wieners? This Halloween season, Saints Row: The Third has you covered. We're bundling our most frightening DLC packs into one low-priced super pack that will have you burning at the stake with glee. Trick or treat? We say, why not both?

During an interview with X-Play, THQ executive VP Danny Bilson claimed that story details for "Saints Row 4" had already been decided on. "Like any game, if you have a great creative core to it you just keep exploiting that core," he told G4. "For instance," he went on, "I know what Saints Row 4 is about and it is wilder than this one. It's a good example of how you take what you have and you ask, 'what could happen in the next?" added Bilson, without giving up any actual details.[28]

For all new DLC, you need to have made it past the assault on the armory ("We're Going to Need Guns") and have unlocked "Shaundi's ex-boyfriend's apartment" crib.

A large number of promotional videos have been released covering the game; including trailers, gameplay and developer commentaries. 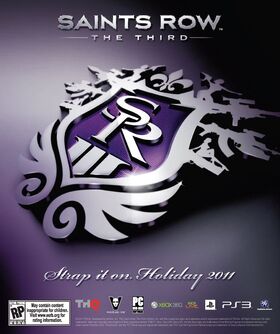 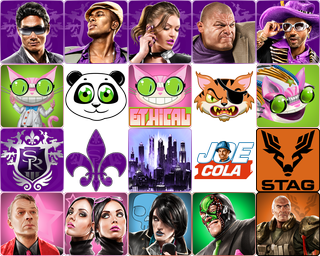 Retrieved from "https://saintsrow.fandom.com/wiki/Saints_Row:_The_Third?oldid=423880"
Community content is available under CC-BY-SA unless otherwise noted.