The S3X Hammer is a weapon in Saints Row: The Third.

STAG's version of the shotgun. No reload time, but watch out for overheating.

An advanced shotgun developed for STAG personnel, the S3X Hammer is a futuristic counterpart to the AS14 Hammer from Saints Row 2. It is by far the least-common shotgun, appearing only rarely used by STAG personnel in key locations. It is first available during the mission Gang Bang, dropped by STAG troops. Equipped with prototype sonic shells, the S3X Hammer can fire continuously with no need to reload, but can overheat if fired too much.

By default, the S3X Hammer has higher firepower than the Grave Digger or AS3 Ultimax. It fires considerably slower than either, resulting in it being a somewhat lackluster weapon without upgrades, though its lack of a reload is useful. As it upgrades, it gets stronger and faster - and while it never quite reaches the speed of the AS3 or the raw punch of the Grave Digger, it strikes a comfortable mean between the two that makes it an appealing weapon, especially with upgrades.

The S3X's biggest drawback is that if it overheats,it takes considerably longer to cool down than a simpler, magazine-fed weapon does to reload. Carefully managing the S3X Hammer's cooling is necessary to get the most out of this potent power-house. 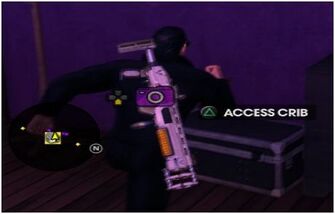 A Fully Upgraded S3X Hammer on The Protagonist's back 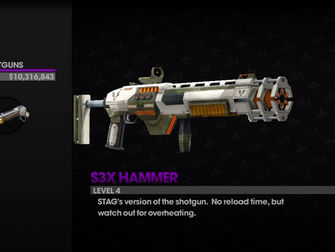 The S3X Hammer in the Weapons Cache

This article contains no references. See Help:Cite.
Retrieved from "https://saintsrow.fandom.com/wiki/S3X_Hammer?oldid=338742"
Community content is available under CC-BY-SA unless otherwise noted.