"Rounds Square Shopping Center" is a Stronghold in Saints Row 2.

Johnny Gat phones Playa and briefs them on some Ultor executives meeting up at the Rounds Square Shopping Center. Despite being escorted around by Ultor security, Playa has no problem gunning them down and reminding Ultor "who they're dealing with".

Visitors to the Rounds Square shopping center were treated to a scene of chaos and death today as members of the Third Street Saints raided the underground mall in search of Ultor executives. Ultor officials are downplaying reports that the Saints have seized control of the shopping center, and assure the public that business will continue as usual.

The final Stronghold in Saints Row 2, takes place in the Rounds Square Shopping Center, which was last visited in the Sons of Samedi mission finale.[1]

First track down and kill four Ultor executives placed throughout the mall. Their accompanying security escorts are weak and all four executives are easy to kill, but police Notoriety is increased to level three after killing the first one. Some Toads are located in some of the corners of the mall for fast travel.

Kill the remaining Ultor execs in the conference room

Go to the bottom floor of the mall and kill various executives in a meeting.

Once all of the executives are dead, escape the mall. Police Notoriety is increased to level five, and the mall is now guarded by the Masako special forces on Toads and on foot. Some of them are equipped with RPG Launchers. Upon reaching the building parking lot, or the lift out of the building, the Stronghold ends.

I got a tip that a bunch of Ultor execs are meetin' up at the Rounds Square Shopping Center today. They're being escorted around by Ultor security, but takin' 'em out shouldn't be too hard. Let's remind these fuckers who they're dealing with.

The mall where the Stronghold takes place 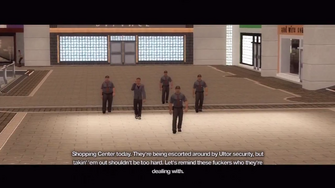 The mall where the Stronghold takes place 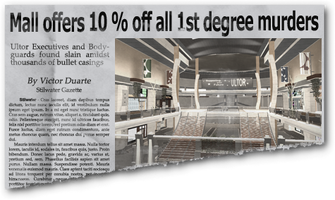 This article contains no references. See Help:Cite.
Retrieved from "https://saintsrow.fandom.com/wiki/Rounds_Square_Shopping_Center_(Stronghold)?oldid=425255"
Community content is available under CC-BY-SA unless otherwise noted.