"Round Peg, Square Hole" is the eighth mission of the Vice Kings story arc in Saints Row.

I'll drive to where the cops are picking up protection money, you make 'em cease and desist with one of Tony's noisemakers. If we make sure the only cops we hit are the one's working for King, people gonna start askin' questions, and the cops are gonna have no choice but come down on the VKs to save face. Let's do this.

— Johnny Gat to Playa, before departing for downtown.

Dex has discovered that the reason the Stilwater Police Department have been going so easy on the Vice Kings is because they've been getting in on some their protection rackets. Dex plans to go public with it, but Johnny Gat arrives with multiple RPG Launchers taken from Anthony's condo.[1] By only hitting the cops who are working with the Vice Kings, Gat believes people will start asking questions, forcing the police to yet again come down on the Vice Kings to save face.[2]

After disrupting five separate meetings between the police and the Vice Kings, Playa and Gat park the dynamite-laden car at the Kingdom Come Records construction site, which they had previously destroyed with a car bomb,[3] and detonate it, yet again destroying the building. Back at Benjamin King's office, Warren Williams and Tanya Winters confront King's apparent indecisiveness. Warren blames King over their recent failures and describes him as a "pussy" due to his reluctance to deal drugs, unlike the Carnales. Along with Tanya, Warren then turns against King as other disloyal Vice Kings gang members enter the office, and they attempt to overthrow King.[4][5]

Benjamin King: "What is this?"
Warren Williams: "I built...I watched...and now I'm acting."

Dex found out that the reason the cops were working for the Vice Kings is that they were in on the Kings' protection rackets. Johnny decided to hit both the Kings and the cops as they met to exchange the money, so that people would start asking questions and the cops would have to come down on the Vice Kings. The two of you "interrupted" a few of those meetings, then drove over to King's recording studio and sent a final message to Warren Williams by bombing it...again.

Johnny Gat drives Playa to five individual meetings between the cops and the Vice Kings, which must be "interrupted". There is infinite ammo across all the weapons, despite the initial cutscene implying the use of the RPG Launcher.

The vehicle used, a blue Cavallaro, can take a lot of damage.

The mission plays out as an easier and arguably more enjoyable form of Drug Trafficking.

Defend your car while Gat drives to the meeting locations.
Interrupt the meeting between the cops and the Vice Kings.

It is not necessary to kill everyone at the meetings - killing even just one enemy at each is enough for Gat to continue onwards.

Defend your car until you get to the next meeting location.

Surviving members of the meetings quickly get into their nearby vehicles and chase after Gat and Playa.

Interrupt the meeting between the cops and the Vice Kings.

The second meeting takes place next to a gas station, so be wary of firing explosives as Gat passes it.

One Vice Kings gang member attempts to shoot the car with an RPG Launcher.

Defend your car until Gat reaches Forgive and Forget.

As Gat drives into the Forgive and Forget, the mission ends and the Humbolt Park neighborhood in the Museum District is unlocked.

The mission can be failed by getting smoked or busted, killing Gat,[6] or allowing the car to be destroyed.[7]

Jack Armstrong: "From the newsroom, I'm Jack Armstrong. Yet another explosion downtown tonight; no one hurt, but the black cloud continues to hang over the Kingdom Come Records family. We're receiving reports that the reconstruction effort on their recording studio and administrative offices came to a screeching halt as an explosion rocked the construction site. No word yet on whether it was a natural disaster, a work-related incident, or more gang violence. Either way, it doesn't look like that highly-anticipated Aisha retrospective will be out in time for the holidays. We are following this story closely here in the newsroom and will bring you details as they occur. I'm Jack Armstrong."

"Subtlety is the Key" cutsceneEdit

Dex: "Okay, it looks like the cops have been getting in on some of King's protection rackets; that's why they've been goin' so easy on the VKs. We gotta go public with this shit. Now if we--"
Johnny Gat: "Don't worry Dex, I have something more subtle in mind."
Dex: "Johnny, you can't be serious."
Johnny Gat: "Fuck yeah, I am."
Dex: "Where did you get those?"
Johnny Gat: "Anthony's condo. He had a big mouth."
Dex: "This isn't gonna end well."
Johnny Gat: "Don't listen to the old woman. I'll drive to where the cops are picking up protection money, you make 'em cease and desist with one of Tony's noisemakers. If we make sure the only cops we hit are the one's working for King, people gonna start askin' questions, and the cops are gonna have no choice but come down on the VKs to save face. Let's do this."

— "Subtlety is the Key" cutscene

So the other day Aisha was giving me shit because I don't do anything nice for her. Can you believe that? I mean I've paid for her everytime we go out, so I'm like "The hell you talkin' about, I picked up the check at the firing range" and then she goes on and on about dinner this, and flowers that. It's fuckin' bullshit, right? (pause) Thanks for your advice man, you're a big help.


— Before and after each mission objective

— After killing an enemy

— After running over someone

"If At First You Don't Succeed..." cutsceneEdit

Johnny Gat: "I think the Kings are through with the Policeman's Balls."
Johnny Gat: "Now all we got left to do is give Warren a nice final "fuck you", and I'd say this has been a helluva day."
Johnny Gat (unused line): "Goddamn, that's pretty."

"We Need to Talk" cutsceneEdit

— "We Need to Talk" cutscene 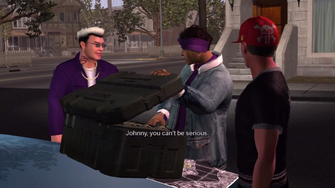 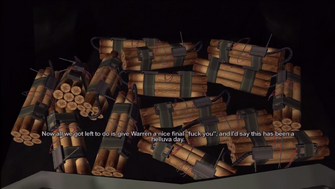 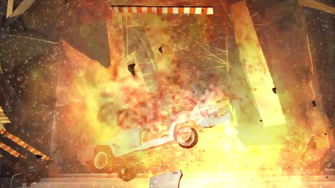 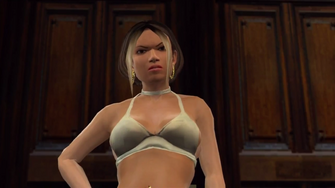 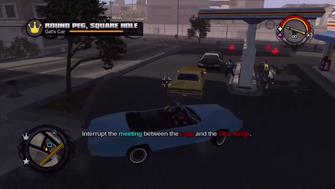 Round Peg, Square Hole - Interrupt the meeting between the cops and the Vice Kings objective 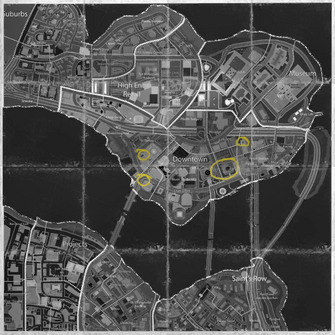 This article contains no references. See Help:Cite.
Retrieved from "https://saintsrow.fandom.com/wiki/Round_Peg,_Square_Hole?oldid=421535"
Community content is available under CC-BY-SA unless otherwise noted.