Roddy Piper is a character in Saints Row IV.

No one calls Roddy for help... He shows up where he's needed most.

Roddy Piper is introduced in Saints Row IV as part of Keith David's nightmare simulation. Piper helps Playa in beating up Keith in order to make him reveal where Kinzie has been taken.[2]

He is never rescued outside of The Simulation, and two of Roddy's conversations with other Homies indicate that he does not know if he is real or not.

I'll be right there

Wait a minute, if I'm just a figment of Keith David's imagination and the world's been destroyed, then that's means I'm dead. Well shit.

— One of Roddy's idle comments.

If I find that crew cut wearing asshole in here, I'm gonna kill for taking my lines

— One of Roddy's idle comments, referring to Duke Nukem who commonly uses Piper's line from They Live, "I'm here to kick ass and chew bubblegum and I'm all out of bubblegum".

If I yelled hey rube, would anyone else know what the fuck I'm talking about?

That bug eyed shit is in for a world of hurt

Why aren't I moving, I've got stuff to do you know

I should see if Planet Zin have any kilts in stock

— Roddy when being dismissed in Saints Row IV

— Roddy when being dismissed in Saints Row IV

CID: "I have been watching footage of your old fighting matches, Mr. Piper."
Roddy Piper: "We called it wrestling, CID."
CID: "Whatever, it was very similar to an exhibition sport I invented on my home-world."
Roddy Piper: "Oh yeah, ha! Funny how two completely different worlds can create things that are so similar."
CID: "Yes, I am sure it was completely coincidental. You will be hearing from my attorneys, Mr. Piper."

Johnny Gat: "It's nice to see a celebrity who can handle a gun, seems most of them can barely land a punch."
Roddy Piper: "Yeah, I suppose you've met a lot of celebrities, huh?"
Johnny Gat: "Ehh, none that I've been impressed with."
Roddy Piper: "I hear you brother, no shit."

Roddy Piper: "You're the same Ben King who wrote Regicide, right?"
Ben King: "That's right, based on my life. Did you read it?"
Roddy Piper: "Nah, saw the movie, though, it was good."
Ben King: "Well, thank you."
Roddy Piper: "Guy who played you sounds nothing like you, though."

Asha: "I hope you're not offended, but I'm not really familiar with your career. Wrestling wasn't the phenomenon in England that it was in the States."
Roddy Piper: "Oh, of course not. You know, honestly I don't mind a break. The fans are great, but there's more to me than just wrestling."
Asha: "I hear you're also an actor."
Roddy Piper: "Oh sure, that too, but there's much more to me than that."
Asha: "Really? How do you mean?"
Roddy Piper: "Uh, look, I don't tell many people this, but there was a time in the mid-90s that I was the fourth member of a Latin music group called The Rodriguez Vipers. We sang a cappella versions of classic Central American folk songs; hit the Top 40 in the Latin Music charts twice!"
Asha: "Really?"
Roddy Piper: "Nope. But the great thing about you not knowing much about me is I can tell you bullshit like that."

Cyrus: "I never understood why men with your natural martial talent never joined the special forces."
Roddy Piper: "I doubt I could entertain a crowd of fans if I were in the military."
Cyrus: "But, is that really better than serving your country to the best of your abilities?"
Roddy Piper: "If you think giving our soldiers something special to smile about on a weekly basis isn't worth my while, then we got a problem."
Cyrus: "No, there's no problem."

Kinzie: "You were very forward thinking for your time, Roddy."
Roddy Piper: "I'm going to ignore that "your time" comment and just ask what do you mean?"
Kinzie: "Well, there you were, an icon of incredibly masculine pastime one signified by brutality and macho posturing, and the whole time you were sporting long hair and a skirt."
Roddy Piper: "It was a kilt, Kinzie. A kilt. And I was playing a character."
Kinzie: "Still, that was brave. You set an example for a lot of men who were questioning their own fashion choices and maybe even who they were inside."
Roddy Piper: "I never really thought of it that way, but, OK. Umm, thanks?"

Maero: "Roddy, you think you could teach me a few of your best moves?"
Roddy Piper: "Yeah, I could. But only if you're willing to put in the full dedication needed."
Maero: "No kilts."
Roddy Piper: "Sorry, man. Can't help you then."

Matt Miller: "This is... probably a strange time to mention it, but you were one of the best bad guys in wrestling history."
Roddy Piper: "Oh well, that's very kind of you to say."
Matt Miller: "You were probably my favorite wrestler of all time."
Roddy Piper: "Thank you."
Matt Miller: "I even had one of your action figures, I had another of myself too, homemade, not professional of course. I'd pretend we were tag team partners and we'd obliterate our opponents with devastating moves."
Roddy Piper: "Oh yeah?"
Matt Miller: "As our co-op finisher you would throw me over your head and I'd land on the opponent and deliver a massive suplex in midair. Then you and I would go have a tea-party with Mr. Fluffykins and Penelope Rabbit."
Roddy Piper: "I'm gonna be over here, kid."

Shaundi: "You know, we took on a whole gang of maniacal wrestlers in masks years ago."
Roddy Piper: "A gang of masked... Wait, are you talking about Killbane's crew?"
Shaundi: "You know him?"
Roddy Piper: "That asshole? He cost me a title shot 20 years ago. Cheap shotted me outside a gas-station in Pittsburgh, screwed up my neck for months. I've been looking for that fucker for years."
Shaundi: "Oh, well. He's dead now."

Tanya: "God, finally! I'm working with someone I can respect. Man, I loved you as a bad guy back in the day."
Roddy Piper: "Well, thank you. Yeah, playing the bad guy is a lot of fun, you know?"
Tanya: "Then you became a good guy and I was like what the hell. I want old Roddy back, bad Roddy."
Roddy Piper: "Well you know, it's business. I had a lot of fun being a good guy, too."
Tanya: "Whatever, being the bad guy is so much better."

Veteran Child: "A kilt, huh? Heh, heh. That's a bold choice."
Roddy Piper: "Oh really?"
Veteran Child: "It's just, you know, it's a skirt. Not exactly the manliest outfit, especially for taking alien hordes in a crime-ridden city."
Roddy Piper: "Look, man, it's part of my heritage, and I'm proud of it. I've had bigger men than you take cracks at me for wearing these colors and I've taken every single one of them to the mat. Just because we're not in the ring doesn't mean I won't lay your ass out. You know what I wear under my kilt? Your girlfriend's lipstick. We clear?"
Veteran Child: "Yes, sir." 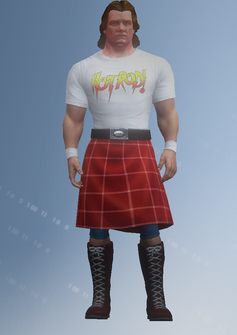 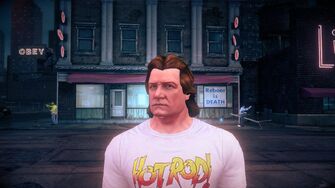 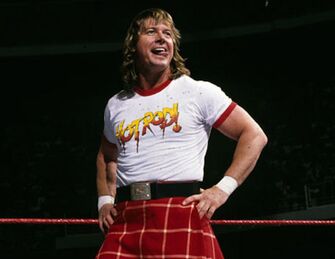 The real life Roddy Piper, on whom the character is based

This article contains no references. See Help:Cite.
Retrieved from "https://saintsrow.fandom.com/wiki/Roddy_Piper?oldid=424151"
Community content is available under CC-BY-SA unless otherwise noted.