The Riot Shield is a Temporary Weapon in Saints Row: The Third and Saints Row IV.

Like other temporary weapons, the Riot Shield cannot be stored in the weapon wheel or Weapons Cache.

Despite this, it is very effective in most combat situations being fully capable of blocking or deflecting most types of enemy fire such as: mounted turrets, melee attacks, pistols, SMGs, shotguns, and rifles. When using a Riot Shield it is still possible to Sprint, and to use either an SMG or pistol can be used.

In addition, pressing the Melee button swings the shield, making it possible to knock down enemies, including those armed with riot shields, and is capable of killing anything short of a specialist or brute.

The Riot Shield has one major advantage over all other temporary weapons in the game. It doesn't come with a limited number of uses, which means it can be used indefinitely.

The Riot Shield is carried by SWAT teams and the SNG. Members of STAG also use their own variant of this weapon, painted in bold STAG colors.

In Saints Row IV, a Zin variant, ZinTek Force Shield is used by Zin soldiers. Although not used in the game, the Riot Shield is present in the game files. 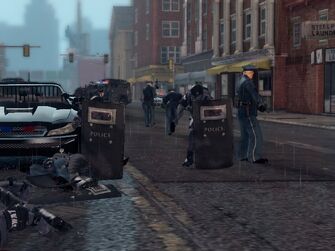 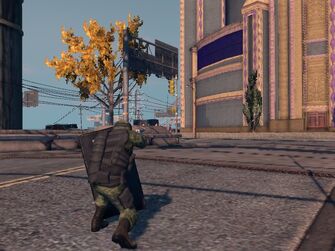 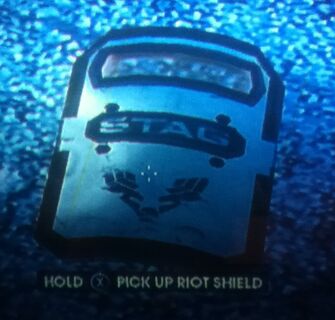 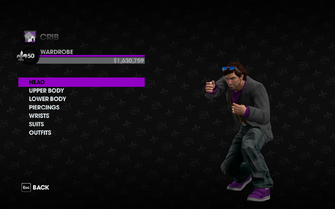 The Riot Shield in the Wardrobe glitch 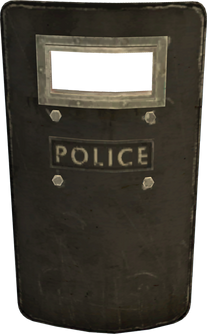 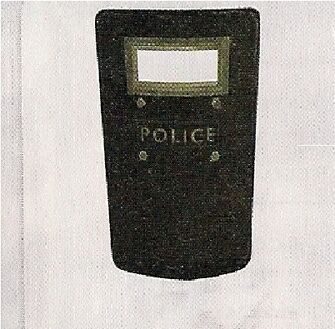 Promotional artwork of the Riot Shield 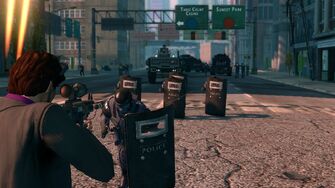 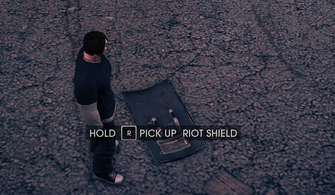 This article contains no references. See Help:Cite.
Retrieved from "https://saintsrow.fandom.com/wiki/Riot_Shield?oldid=421528"
Community content is available under CC-BY-SA unless otherwise noted.