Richard Hughes is a character in Saints Row.

You're going to die here son, make no mistake about that... but if it makes it any easier on you, I'll be sure to thank you in my acceptance speech.

Richard Hughes is an Alderman and a corrupt mayoral candidate in Stilwater, he is also the final antagonist of Saints Row. Hughes is Marshall Winslow's chief political rival, as both men are currently engaged in a fierce mayoral election campaign. To gain an edge and hopefully the vote, Hughes devises a plan to redevelop Saint's Row district. The plan is soon met with critical response from the people of Stilwater with many worried about displacing the Row's inhabitants along with its homeless population. Knowing that his plan still won't be enough to win him the election, Hughes turns his sights to the gang activity in Stilwater. Based on what he sees, he decides to cheat his way into office by resorting to more extreme methods, such as bribing Chief Monroe to his cause.

During the Saints efforts against the Vice Kings, Johnny Gat has Playa destroy a statue of Hughes named The Pride of Stilwater.[4]

After the Saints came out on top on the gang wars, Hughes has Monroe arrest Saints leader Julius Little, leaving Playa in charge of the Saints.[5] While the election seems to be in Winslow's favor, Richard has Monroe strong arm Playa into killing Winslow,[6] as a result Hughes is handed the election.

The Saints decide they had enough of Monroe, so Playa and Dex assassinate him in a massacre during Winslow's funeral, along with a large number of the Stilwater Police Department.[7]

Hughes calls Playa and invites him to his yacht claiming he wants to make peace and that Julius will be there so that they can reach an agreement.[8]

On Hughes' yacht, he first greets Playa thanking him for killing Winslow and compliments him for killing Monroe to keep suspicions off of him. Hughes finally reveals his motives to Playa. He tells him that The Saints are now his scapegoats, so Hughes now has government backing for the plan to be given a go, telling Playa that he was going to "level your community and salt the earth." Just as the confrontation comes to a close, Hughes prepares to order his men to kill Playa but a bomb detonates on the yacht.[3]

In Saints Row 2, it is revealed[where?] that Hughes was killed in the explosion, Playa was put into a coma, and that Julius was the one who set the bomb.

Sometime in the next several years, the Ultor Corporation establishes a branch in Stilwater and takes over Hughes' urban renewal plan, using the gang violence in Saint's Row to push it forward. Saint's Row is leveled and completely rebuilt, and a statue of Hughes was built on a small island near the Phillips Building.

During this same period, Hughes' widow, Monica, successfully runs for Mayor, no doubt due to the death of her husband.

During the events of Saints Row: The Third, Monica Hughes is now a U.S. Senator, and is dedicating a new Hughes Memorial Bridge in Stilwater as a tribute to her husband. However, the ceremony is cut short by the gang war between the Luchadores and the 3rd Street Saints, and the attributing violence ultimately results in the bridge's destruction.[9] The loss of the bridge infuriates Senator Hughes, motivating her into using her political influence to create STAG.[10]

In the final of Tanya Winters' three Audio Logs, it's suggested she had an affair with Richard Hughes, as she says she had him wrapped around her finger along with Warren Williams and Anthony Green, both men she slept with. She jokes about Richard's death.[3][11]

The Pride of Stilwater is a statue that appears in Saints Row. The sculpture depicts Richard Hughes carrying the Earth on his back. It was donated by Citizens for Hughes, and Hughes himself once immodestly described it as "a visual representation not only of the superb talents of Stilwater artisans, but a constant reminder that great men often have to shoulder considerable burden."[12] It is destroyed by Playa, who crashes a Bulldozer into it at Johnny Gat's request.[4]

Upon its destruction, both Hughes and Marshall Winslow create radio advertisements remarking on the statue. Winslow states that while it "wasn't the most popular sculpture on display in [Stilwater]", he ensures that the statue will be replaced with a sculpture that is more representative of the people of the city.[13] Hughes, on the other hand, is more livid over its destruction, noting that "Mayor Winslow's hollow response [...] is simply unacceptable", and that "Its desecration should merit full investigation". Hughes ends by responding directly to those responsible, saying that if they're listening right now, "you can smash brick and mortar, you can break brass and steel, but the spirits of the people of Stilwater cannot be crushed."[14]

The Hughes Memorial Bridge is a Stilwater landmark that appears in Saints Row: The Third. Created under his wife Monica Hughes, who is at this point a Senator, she describes it as "[her] greatest privilege to honor [her husband] with this bridge".[15]

It appears prominently in the mission "Return to Steelport", where the 3rd Street Saints are ambushed by Killbane and his Luchadores during Johnny Gat's funeral procession, as it crosses the bridge during the bridge's official opening. The Saints avoid a bombardment of RPGs which destroy the bridge and almost kill them, prompting them to travel back to the city of Steelport to stop The Syndicate. Furthermore, it fuels Monica's desire to later authorize STAG in a bid to continue her husband's cause in ending gang activity.

In the mission "Live! With Killbane", Killbane doctors footage of Pierce, Shaundi, and Playa dancing in front of the remains of the bridge and shows it during an interview with Jane Valderamma, framing them for its destruction. During the same interview, he also lambastes the Saints as criminals, and Shaundi and Playa ponder whether or not their PR department or Ultor will be able handle it. In the final Deckers mission "http://deckers.die", Matt Miller promises to "prove that [they] didn't destroy that bridge" in exchange for his life.

Last year, Marshall Winslow rejected Police Chief Monroe's request for extra funding to outfit his SWAT units with the latest peace-keeping equipment, citing that puncture-proof vests and assault rifles should come secondary to developing non-lethal countermeasures; the result: six dead officers in as many months... I'm Alderman Richard Hughes, and when I'm elected, I'm going to work with the police, not against them. A policeman's job is dangerous enough - we don't need them to be going into harmful situations at a disadvantage. A well-equipped police force is a deterrent to gangs, which means safer streets and safer schools. So when election day rolls around, ask yourself this question: what is my family's safety worth?

Hello Stilwater, it's Richard Hughes. It's with great pleasure that I announce the unveiling of our city's latest artistic treasure: The Pride of Stilwater. Generously donated by Citizens for Hughes, The Pride of Stilwater is a visual representation not only of the superb talents of Stilwater artisans, but a constant reminder that great men often have to shoulder considerable burden. My friends, I assure you that if you put your faith in me this upcoming election, I will proudly carry our city into a new era of prosperity.

Mayor Winslow's hollow response to the destruction of The Pride of Stilwater is simply unacceptable. This was not merely a piece of modern art that was vandalized, this was a symbol the citizens of Stilwater rallied behind - an icon of the people. Its desecration should merit full investigation, not a few half-hearted words at a press conference. However, from the ashes of this tragedy we will rise stronger than ever. And if whoever is responsible is listening right now, know this: you can smash brick and mortar, you can break brass and steel, but the spirits of the people of Stilwater cannot be crushed.

When my parents moved to Stilwater 50 years ago, this was a place of promise. A lively city of culture and taste, Stilwater offered jobs and a glistening skyline that was the envy of the nation. My, how times have changed. Over the past three decades, the life of Stilwater has been choked out by gang violence and our skyline reduced to tattered brownstones. For years our city has been calling for help, like a woman getting mugged in an alley, and no one has had the courage to answer her plea until now. My name is Richard Hughes and I pledge to you, here and now, that I will return Stilwater to her former glory. I have seen what this city can offer, and I long to show that beauty to a new generation. This coming election, vote for me and secure your children's future.

Hello friends. This is Alderman Hughes with a special message for the youth of Stilwater. I understand that many of you have become disenfranchised with authority. Between parents, teachers, and police, it's easy to feel that the world is trying to hold you back, to stifle your creativity and your freedom. But now is your chance, more than any other, to seize the future, not only for yourself, but for your friends, your neighbors, and your illegitimate children. This year's election gives you the power to choose whether you want to live in a city governed by fear and ineptitude, or one where you can be safe walking home from basketball courts and young Republican meetings. So when you step into that ballot box, remember that a vote for Hughes is a vote for you.

When Marshall Winslow was elected two years ago, he promised us that we were going to see a change; true to his words, Stilwater has seen many changes during his mayoral term: higher taxes, increased crime, and an unemployment rate that would make most third world nations feel good about themselves. What Stilwater needs right now is a leader who is willing to convict criminals, not coddle them; an individual who isn't afraid of making tough choices; a man whose dedication to his citizens is unwavering. My friends, your search is over - my name is Richard Hughes and I want to be your mayor.

Once a beacon of promise, the district of Saint's Row has long since devolved into a contemporary Sodom. A place where diseased whores grope the bodies and virtues of our youth, where drugs ensnare the minds of the impoverished, and all-too-often violence is seen as the solution to any problem. My friends, make no mistake, if Stilwater is ever to be made whole again, something needs to be done about Saint's Row. Mayor Winslow thinks that throwing scraps from his ivory tower to various volunteer programs is enough to clean up the district, but two years of spending with negligible results clearly proves that if we want to see change - real change - we need to take drastic steps. I'm Alderman Richard Hughes; I have the experience, I have the will, and unlike our current mayor, I have a plan. Vote for me and help turn our city into something we can be proud of. 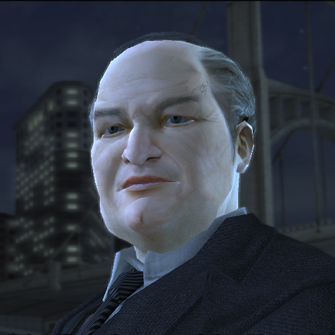 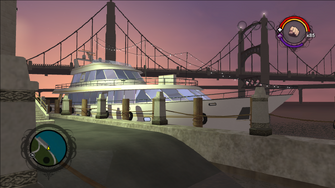 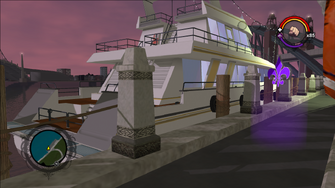 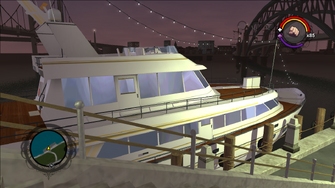 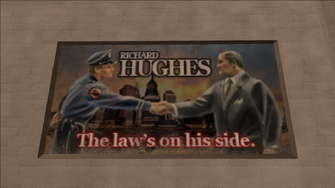 Richard Hughes billboard - The law's on his side 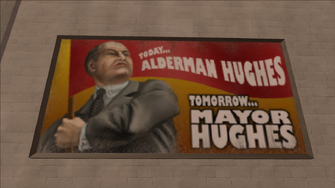 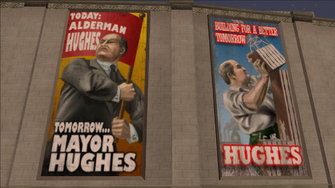 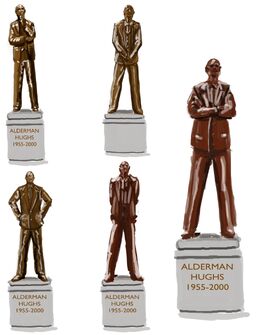 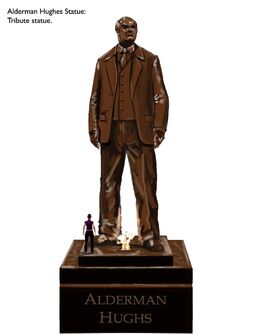 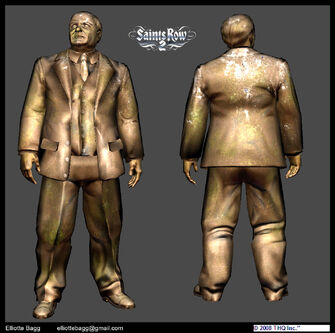 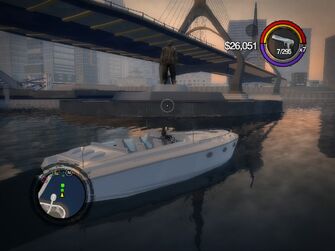 This article contains no references. See Help:Cite.
Retrieved from "https://saintsrow.fandom.com/wiki/Richard_Hughes?oldid=424400"
Community content is available under CC-BY-SA unless otherwise noted.