Revenge is a Diversion in Saints Row: Gat out of Hell.[1]

The Revenge Diversion introduces Dex as a primary target who must be killed at least[verify?] 7 times to complete the Challenge and unlock the Gallows Dodger weapon.

The first few times he spawns, Dex is unarmed and alone. After that, he has a firearm and demon allies, starting with Imps and getting stronger demons with each kill. After being killed 6 times, he spawns with 2 Legionnaires. After being killed the 7th time, this resets and Dex goes back to spawning alone and unarmed, and he continues to spawn indefinitely, with the upgrade cycle repeating.

He only receives additional firepower and allies when he is killed, if his demon followers are killed, but he is left alive, he does not upgrade his followers.[details?] 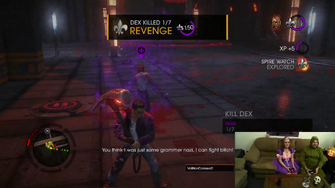 Revenge diversion in Gat out of Hell halloween livestream

This article contains no references. See Help:Cite.
Retrieved from "https://saintsrow.fandom.com/wiki/Revenge?oldid=408864"
Community content is available under CC-BY-SA unless otherwise noted.