"Reunion Tour" is the second mission of the The Brotherhood story arc in Saints Row 2.

Donnie is mourning Lin at the site where she died[1] at the Ultor Dome neighborhood when Playa appears. At gunpoint, Donnie is forced by Playa to do some "pro bono mechanic work".[2]

After being forced to destroy a few of The Brotherhood vehicles, Donnie is dumped outside the Brotherhood hideout as Playa drives away. Donnie explains what happened, and in a rage Maero almost kills Donnie, but Matt and Jessica talk him down.[3]

Witnesses say a recent string of car explosions may be due to tampering by a local mechanic. Shortly before a string of incidents left members of the Brotherhood dead, an eyewitness was quoted as seeing a mechanic, known only as "Donnie" tampering with the vehicles while being overseen by someone fitting the descripton[sic] of the Third Street Saints leader. Phone calls to Donnie's Garage were not immediately returned.

Donnie must be driven to four individual trucks and protected as he arms them with bombs.

Donnie's Voxel is supplied at the beginning of the mission, but using it is not a requirement.

Donnie is displayed in the Homie HUD, but cannot be revived if killed.

Drive Donnie to the first truck

The first truck is an Alaskan located in Copperton.

Guard Donnie while he plants the bomb

There is no on-screen timer while Donnie arms the bomb, and he takes a while.

When he does eventually finish, walk or drive a short distance away and detonate the bomb with the Detonator.

Drive Donnie to the next truck

The next location is in Chinatown, where there are two Legions.

Because it is located in a narrow alley, The Brotherhood are limited in places to approach, but there is little cover around.

Once Donnie finishes with both trucks, walk or drive a short distance away and detonate the bomb with the Detonator.

Drive Donnie to the last truck

The final truck is a Compensator parked outside On Track.

After arming the bomb and driving away, Donnie notes that the Detonator is broken and that they must wait for the timer to go off.

Keep away from the truck

Members of The Brotherhood get into the rigged Compensator and begin pursuing Playa. Keep a safe distance from the vehicle for 30 seconds, until it explodes.

Once the Compensator explodes, the mission ends. If Playa is still inside Donnie's Voxel, it can be kept and stored in the Garage in addition to the unlocked vehicle.

The mission is failed if Donnie is killed or Playa being Smoked or Busted.

"We Grieve In Different Ways" cutsceneEdit


— "We Grieve In Different Ways" cutscene

Look, I know you're pissed about Lin, I am too, but I had nothing to do with killing her...

— Donnie, while on the way to the first location

Maero's gonna kill me for this.

— Donnie, after setting the first bomb

It's been years since I was in the Rollerz, can't you let it go?

— Donnie, while on the way to the second location

When Maero finds out you made me do this, you're fucked...

You don't know what you're doing, starting shit with the Brotherhood is gonna get you killed...

Why are you doing this?

I never did anything to you, all I ever did was fix cars...

— Donnie, while on the way to the third location

I'm finished, can I leave?

Shit, the detonator's not working and I can't fix it...we just gotta wait until the timer goes off...

— Donnie, after setting the last bomb

I can't go against the brotherhood, they'll kill me!

Why are you making me do this?

Can you put the fucking gun away, I did what you told me do...

Here's the detonator...it's IR so you'll have to look at at the truck if you want the bomb to go off.

I'm telling you you don't wanna do this. Once you start shit with Maero he won't stop.

You just started something that you're not going to be able to finish.

This isn't right, I never did anything to the Saints...

I'm doing what you want, just keep your end of the deal and when we're done let me go. 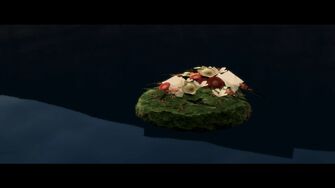 A wreath dedicated to Lin, thrown by Donnie to mark the spot where she died 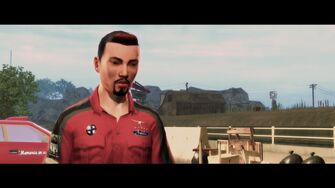 Playa holds a gun up to Donnie

Playa holds a gun up to Donnie 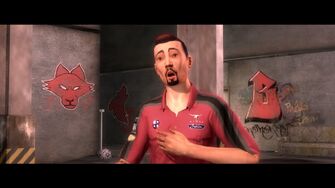 Donnie inside the Brotherhood hideout 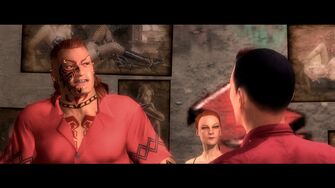 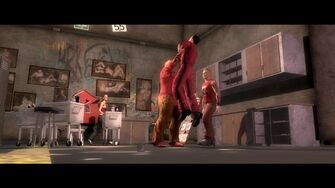 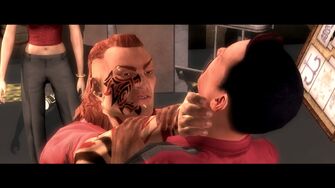 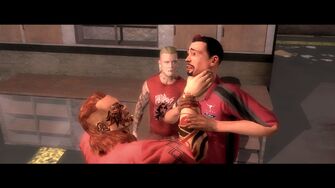 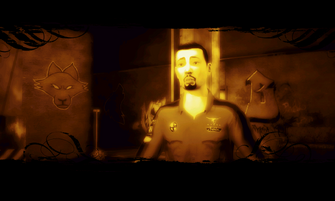 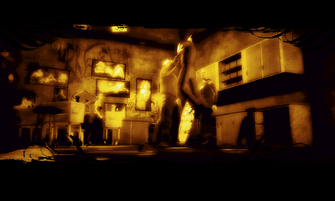 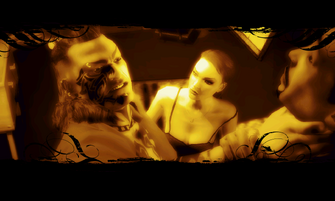 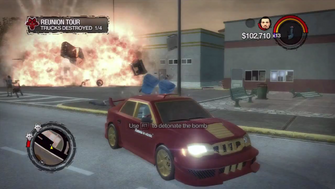 This article contains no references. See Help:Cite.
Retrieved from "https://saintsrow.fandom.com/wiki/Reunion_Tour?oldid=425065"
Community content is available under CC-BY-SA unless otherwise noted.